Please ensure Javascript is enabled for purposes of website accessibility
Log In Help Join The Motley Fool
Free Article Join Over 1 Million Premium Members And Get More In-Depth Stock Guidance and Research
By Daniel Miller - Dec 4, 2017 at 6:02AM

Here's a look at companies making big moves or big headlines in the markets last week.

On the bright side, for investors at least, stocks managed to gain back much of the early morning dip on Friday with the Dow ending the week up 2.9% and the S&P 500 up 1.5%. 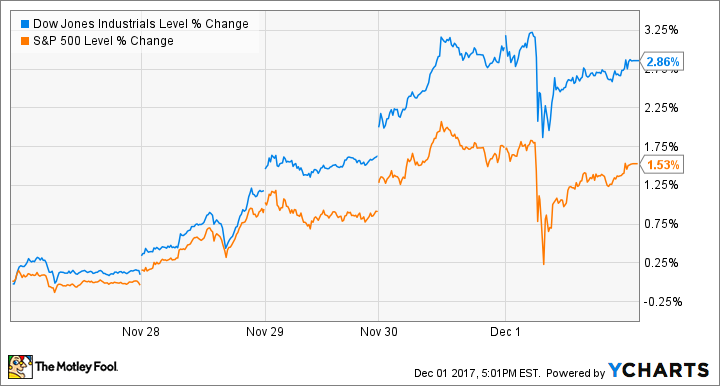 Brushing that aside, here are some companies making big moves or big headlines this week.

Thanks to Nissan having a "system issue," final U.S. industry sales won't be official until Monday, Dec. 4. But excluding the Japanese automaker, industry sales rose a modest 1.1% during November, which was ahead of estimates.

Ford Motor Company (F 1.71%) delivered a strong November with total sales up 6.7% driven by its SUV and truck segments, which posted year-over-year gains of 13.3% and 4.1%, respectively. Ford's bread-and-butter F-Series lineup recorded its best November sales in 16 years and even more impressive was its average transaction pricing moving $3,800 higher to a strong $47,100 per truck. Even better than Ford's SUV sales gains of 13.3% was that it was driven by retail sales, which were up 11.6%, rather than less profitable fleet sales. On the flip side of Ford's impressive November was Fiat Chrysler Automobiles (FCAU), which extended its losing streak to 15 consecutive months of sales declines as November sales dropped 3.7%. It wasn't just FCA's sales decline that concerned analysts, either: "For the eighth consecutive month, Fiat Chrysler also heavily targeted non-prime consumers -- those with FICO scores below 620, with special incentives on a range of models," Autotrader analyst Michelle Krebs said, according to Automotive News.

Stitch Fix (SFIX -0.81%) perhaps picked an opportune time right around Black Friday, Cyber Monday, and upcoming holiday sales to go public, but you wouldn't have thought that two weeks ago. For those who missed it, Stitch Fix got off to a rough start as it lowered its initial price to $15, down from the initial proposal of between $18 and $20 per share. But since then the stock has been roaring higher, up 55% since its IPO. 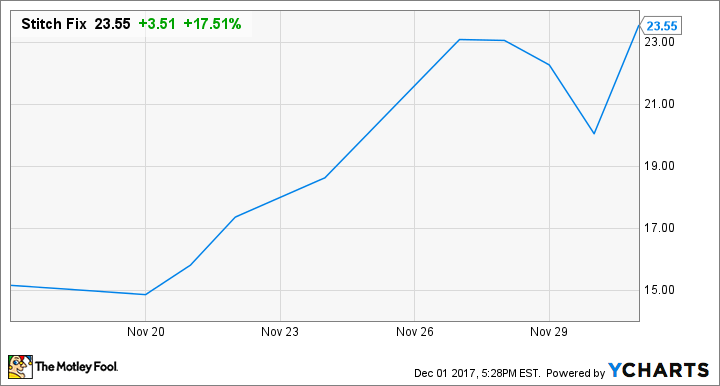 Stitch Fix is a San Francisco-based startup that selects clothing for women through its consumer preference data and stylists. It's an appealing option for women who can't spend hours at the mall or looking through a plethora of products online. So far it's proven to be a success and its unique business model is rare compared to many IPOs because it's actually profitable. On top of being profitable, it's managed to grow revenue to almost $1 billion in fiscal year 2017.

It's an intriguing stock, even more so now that its stock price has surged 55% since its IPO, but there's no question it's also a risky option for most investors. Its revenue growth has slowed from 113% during 2016 down to 33.8% during 2017, and with other recent online IPOs, such as Blue Apron and its struggles, investors might be wise to watch this from the sidelines in the near term.

Kroger (KR 1.71%) investors had reason to celebrate Thursday when its stock jumped as much as 13% after the company released its third-quarter results that topped estimates. More specifically, Kroger's earnings per share checked in at $0.44 on revenue of $27.7 billion, which topped analysts' estimates calling for earnings per share of $0.40 on revenue of $27.5 billion.

It was a collective sigh of relief for many who own the stock, simply because of the doom and gloom that has surrounded the industry after Amazon.com decided to jump into the grocery business with its purchase of Whole Foods Market. And there were other aspects of Kroger's third quarter for investors to be optimistic about. Total sales were up a healthy 4.5%, and its earnings-per-share growth was an impressive 23%. Arguably the most intriguing increase was found with Kroger's digital revenue, which climbed an impressive 109% compared to the prior year, driven by its ClickList product -- a personalized online ordering service.

It's possible the near-term impact from Amazon's venture into grocery has been overblown. Kroger management believes that with Black Friday falling in the fourth quarter it's poised for a strong finish to the calendar 2017 year, and will gain momentum heading into 2018.