Please ensure Javascript is enabled for purposes of website accessibility
Log In Help Join The Motley Fool
Free Article
Join Nearly 1 Million Premium Members And Get More In-Depth Stock Guidance and Research
By Daniel B. Kline – Dec 4, 2017 at 7:15AM

The company is partnering with DoorDash to build out a service that has worked well for its rival.

Fast food's business model has always been built around a certain amount of laziness. Consumers who want to eat, but don't wait to put in the effort to cook or take the time to sit down at a nice restaurant, could eat a quick meal with minimal effort at chains such as McDonald's (MCD 0.12%) and Wendy's (WEN -0.65%).

The food may not be precisely good, but it's tasty, it's cheap, and in many cases, you can order a whole meal just by saying a number. You can order fast food without leaving your car. And now Wendy's is following McDonald's by offering home delivery in some markets.

That adds a new level of convenience for consumers who now no longer have to walk further than their front door if they want a fast-food meal. In fact, convenience over everything else appears to be what consumers want, if the early success of home delivery is any indication. 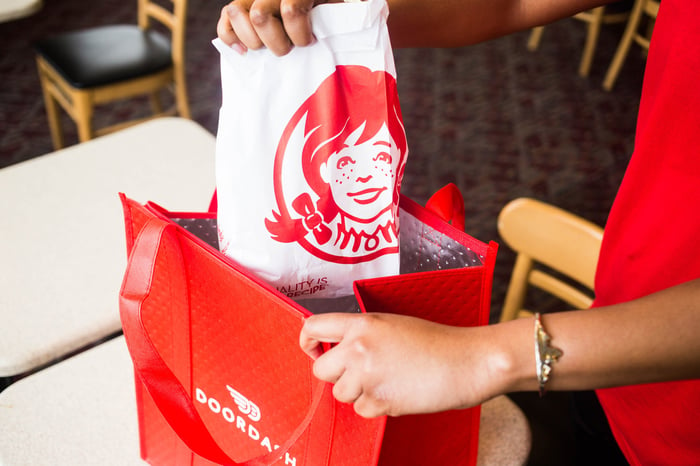 What is Wendy's doing?

The chain has partnered with DoorDash to deliver its food direct to consumers at their homes or places of work in 48 markets nationwide, with plans to grow that number. This wider effort builds on a pilot program between the two companies earlier this year across 135 restaurants in the Columbus, Ohio, area.

"Rolling out delivery has quickly progressed, along with demand for convenience and delivery trends," said Wendy's Vice President of Customer Activation Liz Geraghty in a press release.

DoorDash drivers use thermal bags to keep food hot or cold, and the company limits its delivery radius "to ensure food stays fresh and deliveries are as fast and efficient as possible." The partnership between the two companies is exclusive in markets the delivery company operates in.

Why is Wendy's doing this?

The company is following a blueprint that Domino's (DPZ 0.60%) laid out and McDonald's has also used. The pizza company has built its business on convenience and familiarity rather than food quality. Domino's has made it incredibly easy to order a pizza through an app, through text messaging, and even through various social-media platforms. And once that pizza is ordered, delivery is quick and the pizza tastes as expected.

By offering "good enough" pizza that's inexpensive and really easy to get, Domino's has been a steady grower. The company saw same-store sales climb by 8.4% in Q3, marking its 26th consecutive quarter of positive U.S. sales growth. Internationally, its same-store sales have climbed for 95 straight quarters, all while the company steadily adds hundreds of locations each quarter.

McDonald's has only been rolling out delivery on a widespread basis for a few quarters in its home market. The company first tested delivery in a Miami-area pilot program in January. CEO Steve Easterbrook, speaking during the chain's Q2 earnings call, noted that 75% of the population in the company's top markets live within three miles of a McDonald's.

"In many of our markets around the world, we're seeing average check sizes between 1.5 and 2 times higher than our overall restaurant averages," Easterbrook said.

Why is this working?

Few consumers consider Domino's the best pizza available or McDonald's the best burger. They may like the food each company offers, but the real value is that it's easy to get and inexpensive. Both chains have invested heavily in app-based ordering, making it so consumers don't even have to speak to a person. That's convenient, and removing a certain level of shame for buying poor-quality food may lead to larger orders.

There may be a saturation point when enough companies offer delivery that it hurts everyone's sales. That point is not here yet. Despite the numerous multi-restaurant delivery services and the increasing amount of chains doing it on their own or with partners, it appears that consumer demand for home delivery continues to grow.

Wendy's is smart to jump on that bandwagon while it's still relatively early. That should provide at least a short-term sales boost, and the risks are minimal because the chain has decided to use a third-party delivery service instead of building its own infrastructure.