Please ensure Javascript is enabled for purposes of website accessibility
Log In Help Join The Motley Fool
Free Article Join Over 1 Million Premium Members And Get More In-Depth Stock Guidance and Research
By Cory Renauer - Dec 4, 2017 at 7:18AM

Runaway success for this pioneer of robot-assisted surgery has inspired a slew of competitors to enter the arena.

Surgeons around the globe will perform around 867,000 procedures using Intuitive Surgical, Inc.'s (ISRG 2.53%) robots this year, making this company the undisputed champion of robotic surgery, today. The market this company helped create is growing fast, but it looks like staying on top is about to get a lot harder.

Medical device heavyweight Johnson & Johnson (JNJ 1.46%) has teamed up with Alphabet (GOOG 5.20%)(GOOGL 5.11%) to form Verb Surgical. These behemoths are still plotting their assault, but smaller players Mazor Robotics Ltd. (MZOR) and TransEnterix (ASXC -3.63%) have already started marketing their own systems on Intuitive Surgical's home turf. Let's take a closer look at the competitive threats Intuitive's shareholders will probably be worrying about in the years ahead. 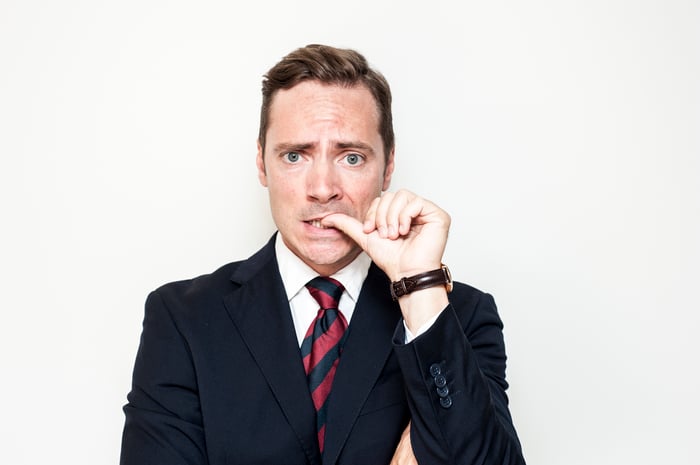 Combining machine learning with robotic surgery is a lofty goal, but Verb Surgical's parents have deep enough pockets to make it happen. Google's life sciences division will provide data analysis muscle to sift through reams of data thrown off by their surgical robots. The pair intend to improve on the complication-lowering value proposition that drives demand for surgical robots with systems suitable for the gynaecological and abdominal procedures that are Intuitive's bread and butter.

If each new system Verb eventually produces can benefit from the combined experience of every preceding robot, in the same way Google's autonomous vehicles are constantly improving, Intuitive Surgical might have a hard time keeping up. Luckily, it could be a long time before hyper-accurate robots from Verb present a serious threat. The company unveiled its first working prototype this January, but it still hasn't announced any movement on the regulatory front. 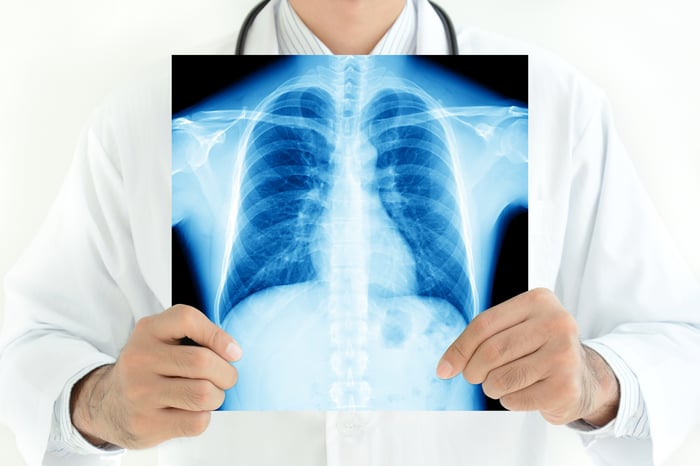 If you had to sum up what makes all the latest cancer therapies great, it's their ability to seek out specific targets. Unfortunately, taking samples of solid tumors buried deep in vital organs stifles their precise application. That's why Intuitive Surgical formed a joint venture with Chinese distribution partner Fosun Pharma last year.

The pair intend to develop robotics to diagnose, and possibly treat, lung cancer. This isn't the most common malignancy, but it's the deadliest partly because it's nearly impossible to get a scalpel deep into a person's lung without causing more problems than you fix.

Investors will want to keep their eyes open for signs that Intuitive's lung cancer aspirations can stay ahead of Auris Robotics. This company is headed by a founder of Intuitive Surgical who left years ago and is pursuing what looks like a system for removing lung tumors -- or at least taking a little sample. Rather than pierce the lung cavity from the skin inwards, Auris is developing a system with long, tiny arms that look perfect for accessing human lungs through patients' mouths.

One major limitation of Intuitive Surgical's da Vinci systems is their lack of tactile response, and Medtronic (MDT 1.75%) made a move to take advantage of this weakness last year. The medical device juggernaut licensed medical robot technology developed by the German Aerospace Center that relays all the delicate sensations that traditionally helped surgeons guide their instruments.

Medtronic doesn't market any robotic surgical systems itself yet, but it does have an important partnership with Mazor Robotics. The little Israeli start-up delivered 22 new systems in the third quarter and saw revenues rise 126% higher than the same period last year. Mazor shipments pale in comparison to the 169 systems Intuitive installed during the same three-month period. Now that Medtronic is responsible for marketing Mazor's systems, though, the partners could start closing the gap. 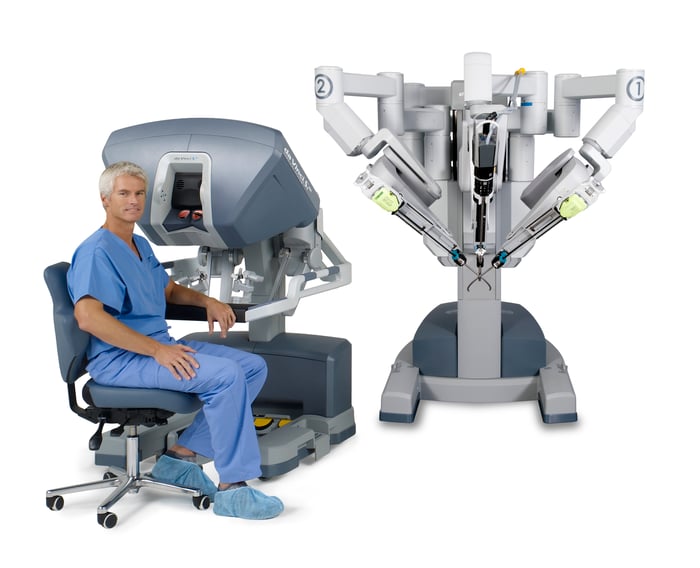 At the moment, Mazor and Medtronic don't present direct threats because they operate exclusively in the spinal surgery theater, a space Intuitive hasn't entered. One robotic surgery upstart the company could begin competing with in the U.S., though, is TransEnterix. The company hit some roadblocks in the past with its previous systems, but the stock shot up recently after the FDA gave a big thumbs up to its Senhance Surgical Robotic System, which could compete with Intuitive's da Vinci systems for patients undergoing similar procedures.

In the past year, Transenterix recorded just $3.8 million in total revenue, so the slings and arrows it can afford to hurl at Intuitive Surgical are tiny. Now that its system is cleared for sale in the U.S., though, hospitals can at least point to the presence of a competitor when haggling with Intuitive over pricing.

There's also a chance another large healthcare company looking to make a splash in the robot assisted surgery pool could team up with Transenterix, giving the start-up plenty of financial firepower to compete on a more even playing field.

Intuitive Surgical has already begun increasing R&D spending to head off incoming threats, which is going to squeeze margins. It's hard to say which threat is the most concerning at the moment, but investors will have plenty to concern themselves with in the quarters ahead.