Here's the not-so-secret reason Apple will win the race to $1 trillion.

Yet while it now may seem like a fait accompli, the race to be first to a trillion-dollar market cap wasn't always promised for Apple. In early 2016, Alphabet (GOOG -3.69%) (GOOGL -3.93%) briefly eclipsed Apple's market cap, as the two traded closely for most of that year. In 2017, on the back of a year-to-date increase of approximately 50%, Apple has significantly distanced itself from its smartphone operating system (OS) competitor. 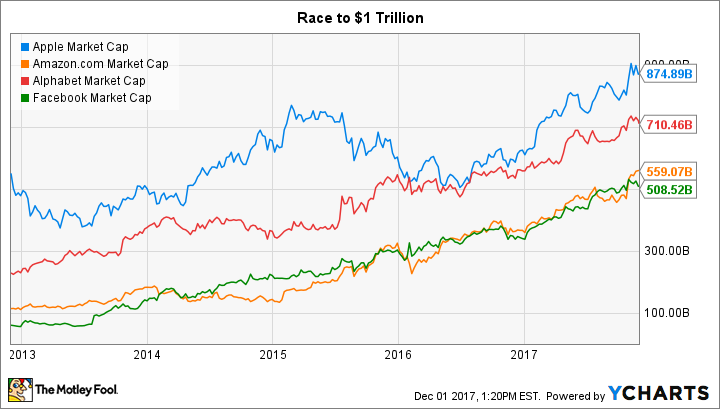 It's not valuations that are putting Apple in the lead

Investors have certainly not done Apple any favors in its push to $1 trillion. Apple is more modestly valued than its competitors on most metrics. Using a sample of popular investing valuation metrics, Apple can be considered as undervalued.

If investors afforded Apple the same multiples as the median company from the chart above, its market cap would be between 7% and 83% higher than its current value. Indeed, on the highly-watched price-to-earnings metrics, both current and forward medians would make Apple a $1 trillion company.

It's understandable that Apple, with hardware as its core business, will not receive the same valuations as its software-focused mega-cap brethren that have stickier, less-seasonal revenue streams. However, Apple is doing an admirable job growing its software and services business, which now accounts for 16% of total revenue. Each company has great operations, and all are continuing to grow their bottom lines; Apple just produces more profit than the others, and the reason why shouldn't be a secret.

Apple has 1.3 billion reasons why it will eventually win the race to $1 trillion. So far, Apple's been the only one of these four technology giants to succeed in China. Although Amazon, Alphabet, and Facebook dominate their respective markets in the United States, it was always going to be difficult to win the $1 trillion valuation race if they can't execute in a country that claims 20% of the world's population. Last fiscal year, Apple reported $44.8 billion in sales from Greater China. Although that figure decreased 8% on a year-on-year basis, it represents approximately 20% of Apple's total revenue haul. In the end, it's a simple construct: one in every five dollars Apple reports in revenue is from China, a significantly higher percentage than Amazon, Alphabet, or Facebook.

Through a combination of bad luck, bad timing, strong homegrown competitors, or outright government bans, Apple's peers have struggled in China. Although Facebook (FB -5.12%) has 2 billion monthly active users, very few of those are from China. Since 2009, Facebook has been banned from the country.

Despite Mark Zuckerberg's charm offensive, including running in Tiananmen Square and speaking Mandarin at Tsinghua University, the country's government hasn't allowed its eponymous site on the mainland. The company launched an app approved in the country, but without any hint they were behind the app's development.

On the surface, it would appear Alphabet has a strong presence in China, as Android, its smartphone OS, has an 80% market share. However, the OS has been forked so the valuable search function and user data go to Chinese companies, mainly Baidu. Google's additional services, like Gmail, are blocked or severely restricted in the country, leading to little or no revenue from its Chinese presence.

Amazon (AMZN -7.16%) has legally recognized operations in China, but hasn't been able to find its niche in a market dominated by "China's Amazon," Alibaba, and JD.com. Earlier this year, The Wall Street Journal reported the company's market share in the country was a paltry 1.3% in 2016. It doesn't appear that Amazon's path forward will get any easier, as Wal-mart has partnered with JD.com to bolster its standing.

A race where winning isn't everything

When Apple claims its spot as the first $1 trillion public company, it will be a tremendous accomplishment, and its investors should be ecstatic. It's important to note this figure is only 15% away.

More importantly, investors should evaluate these companies on their current potential, and all look to be strong investments. Look for Facebook, Alphabet, and Amazon to continue to dominate their markets. Apple may be the first to $1 trillion, but I doubt it will be the last.