On a day indexes pulled back, shares of AeroVironment soared on higher drone sales, and Veeva Systems sagged despite reporting a good quarter.

Indexes fluctuated between gains and losses during the trading session Wednesday, but ultimately closed in the red. The Dow Jones Industrial Average (^DJI 0.00%) and the S&P 500 (^GSPC -0.88%) both posted small losses.

As for individual stocks, shares of AeroVironment (AVAV 5.44%) soared on profit news, and Veeva Systems (VEEV -0.85%) fell after it reported expectation-beating results, but gave disappointing guidance. 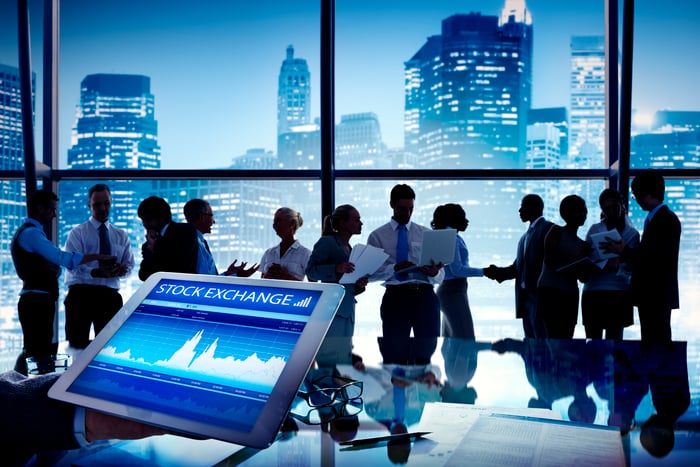 AeroVironment takes off on a surprise profit

Shares of military drone maker AeroVironment soared 25.9% after the company reported an unexpected profit on sharply higher sales in its fiscal 2018 second quarter. Revenue increased 47% to $73.8 million and earnings per share came to $0.29. AeroVironment posted a loss of $0.19 per share in the period a year earlier. Analysts were expecting the company to lose $0.06 per share on sales of $63.5 million.

The revenue gain was primarily due to a $23 million increase in sales by its unmanned aerial segment, but its electrical vehicle charging system business also posted a small gain. The order backlog posted a large sequential gain, pointing to higher sales in the future.

"Our innovative solutions continue to lead their markets, as orders for products and customer-funded research and development programs boosted our funded backlog to $127 million, a 49 percent increase over last quarter, significantly increasing our revenue visibility for the current fiscal year," said CEO Wahid Nawabi in the press release.

AeroVironment left its guidance for the full year unchanged from last quarter, but the fact that the company earned a hefty profit when a loss was expected was enough to make the stock one of the biggest gainers on the day.

Veeva Systems, a provider of cloud-based software for the life sciences industry, reported revenue and earnings for the third quarter of fiscal 2018 that beat expectations. However, investors were apparently hoping for better guidance for next year, and the stock fell 6.6%.

Revenue grew 23% to $176 million, and non-GAAP EPS was up 13.6% year over year to $0.25. Wall Street analysts were expecting the company to earn $0.21 per share on sales of $172 million. Subscription revenue grew 25% to $142 million, and the company reported particular strength in its Veeva Vault product, adding a record number of customers for the platform that now accounts for 40% of total revenue. Services grew 17% to $34 million.

Looking forward, Veeva forecast revenue and earnings for the next quarter that were above what Wall Street was expecting, but forecast fiscal 2019 revenue at $805 million, with subscription growth at 20% and services growth in mid- to high-single digits. The total revenue figure matched analyst estimates.

In the very near term, Veeva could be a victim of its own success, with observers conditioned to expect nothing but increasingly better news every time the company reports numbers or gives guidance. The conservative forecast represents a drop-off in the growth rate, but the stock merely retreated to levels seen last May.