Brian Stoffel, Tyler Crowe, and Timothy Green
(TMFCheesehead)
Author Bio
Brian Stoffel has been a Fool since 2008, and a financial journalist for The Motley Fool since 2010. He tends to follow the investment strategies of Fool co-founder David Gardner, looking for the most innovative companies driving positive change for the future. He also mixes in risk-management strategies he's learned from Nassim Nicholas Taleb. Follow @Brian_Stoffel_
Follow @Brian_Stoffel_

For those of us in the United States, Priceline Group has long been associated with William Shatner and his "Name Your Price" promo. But it's so much more than that. The 2005 acquisition of Booking.com gave Priceline access to what has become one of the largest hotel booking websites in Europe and the rest of the world.

The network effect of Booking.com has given Priceline shareholders enormous returns. While the stock is only up 300% since the company went public in 1999, that's in large part because it went public at the precipice of the dot-com bubble. A $10,000 investment on the first day of 2001, on the other hand, would be worth almost $2.3 million today. 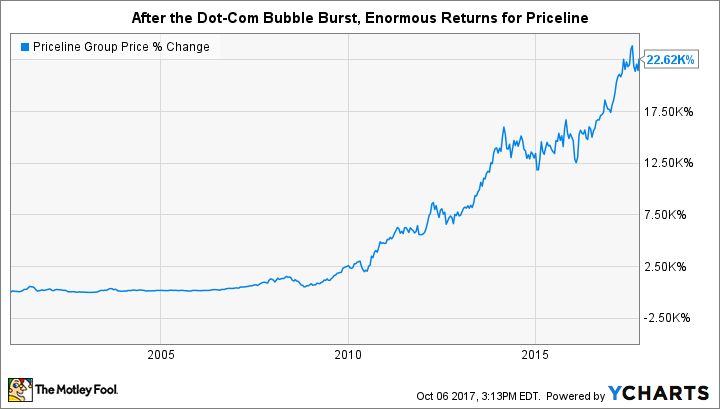 We've asked three Motley Fool investors to share one stock they think could produce results similar to what Priceline has done for investors. Read on to see their thoughts on Ctrip.com (NASDAQ:TCOM), Paycom Solutions (NYSE:PAYC), and Aerovironment (NASDAQ:AVAV).

Priceline already invests in "The Priceline of China"

Brian Stoffel (Ctrip): It's only fitting that we start with a company often referred to as "The Priceline of China." In fact, Priceline is so confident in Ctrip's position in the Chinese market, it has chosen to partner with Ctrip and owns 8.9% of shares outstanding.

After breaking out to a rather large lead in China's online travel agency market, Ctrip faced some staunch competition coming out of the Great Recession. Qunar and eLong entered the market and started pricing hotels and airline flights for lower -- beginning a protracted pricing war. Peace came, however, two years ago, when Qunar and Ctrip effectively merged.

Since then, Ctrip has been consolidating its many moving parts, and gross margin has improved dramatically -- expanding 978 basis points from the end of 2014 to the first half of 2017, to 81.19%.  At the same time, Ctrip's two largest divisions -- transportation and accommodations -- have continued their rapid expansion.

With each additional Chinese user flocking to Ctrip to book travel plans, vendors have even more incentive to use Ctrip, giving the company even more leverage. Those are dynamics that could turn Ctrip into a Priceline-like stock.

Tim Green (Paycom Software): Just like Priceline back in 1999, Paycom Software, a provider of cloud-based payroll and human capital management software, is in the early innings of its growth story. The company is a small fish in a big pond, with just $329 million of revenue last year in a market measured in the tens of billions of dollars. Many years of double-digit growth are likely ahead.

What makes Paycom particularly exciting is its profitability. Unlike most fast-growing software-as-a-service (SaaS) companies, Paycom is solidly profitable. The company's sales and marketing efforts are efficient and effective. It doesn't hurl money into a black hole in an attempt to grow revenue as fast as possible. Instead, new sales teams are built by existing sales managers, a two-year process that leads to an income statement that looks nothing like its peers. 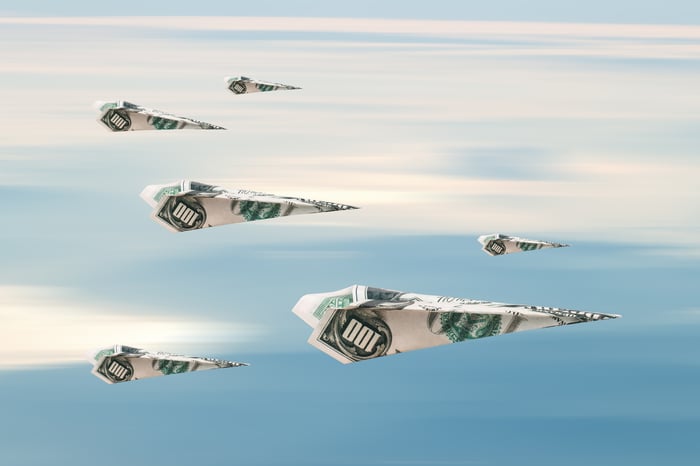 In 2016, Paycom produced GAAP net income of $44 million, more than double the previous year. Sales and marketing spending was just 36% of revenue, far below that of other fast-growing SaaS companies. SaaS giant Salesforce.com, for example, spent nearly 47% of revenue on sales and marketing in 2016. No surprise, Salesforce's profits were minimal.

There is a downside: Paycom stock is downright frothy. Shares trade for over 100 times last year's GAAP earnings, a valuation that bakes in a lot of growth in the coming years. But if you're willing to pay a high price for one of the best SaaS companies around, Paycom is a solid choice.

On the pulse of some massive market opportunities

Tyler Crowe (AeroVironment): One of the things that made Priceline so successful was that it was able to tap into a market that had yet to really take off. To me, that is what makes AeroVironment so interesting as a potential stock. It has a strong toehold in two markets that have an incredible opportunity to take off in the future. What's even better is that the company already has a higher-margin business in place to support its efforts.

The two markets that look incredibly compelling for AeroVironment are commercial unmanned aerial systems, (more commonly known as drones) and electric-vehicle (EV) charging equipment. For years, AeroVironment has made a suite of drones for the U.S. military that serve a multitude of purposes on the battlefield. Today, though, the company is taking a lot of the technology for those drones and finding outlets for them in the commercial world. According to Goldman Sachs, the commercial drone industry alone could grow to a $21 billion business by 2021.

On top of that, the wider adoption of EVs will mean more and more people will need charging stations in their homes. Even with only 5% of light vehicles changing over to full EVs, it represents a $1 billion opportunity in the U.S. alone. With the big three auto manufacturers in the U.S. signed up to use AeroVironment's home charging system, the company has the inside track on a major market about to come into its own.

AeroVironment has been one of those investments that seems to perpetually be one year away from greatness. However, it's looking as if the markets in which it operates are taking off in earnest, and the company should benefit immensely over the next several years.