Please ensure Javascript is enabled for purposes of website accessibility
Log In Help Join The Motley Fool
Free Article Join Over 1 Million Premium Members And Get More In-Depth Stock Guidance and Research
By Jamal Carnette, CFA - Dec 7, 2017 at 10:08AM

These two technology stocks are cheap, but are they worth an investment?

Technology led the stock market out of the Great Recession. Since it officially ended in June 2009, the Nasdaq 100 -- widely considered the broadest technology-focused index -- has increased by 330%, nearly double the S&P 500's advance of 180%.

Still, the advance of technology has been uneven. Companies that provide next-generation technology -- like Apple, Alphabet, and Facebook -- have led its strong performance. Meanwhile, many old-technology companies have struggled to defend their market shares amid a shift in consumer behavior. 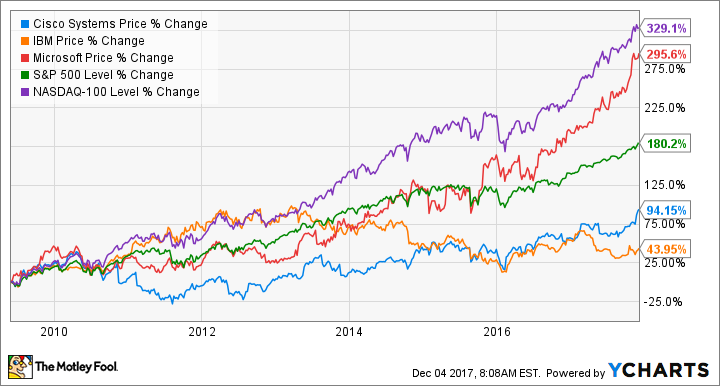 Two such companies are Cisco Networks (CSCO -0.09%) and International Business Machines (IBM -0.05%). Is it time now to look at these companies as turnaround value buys? 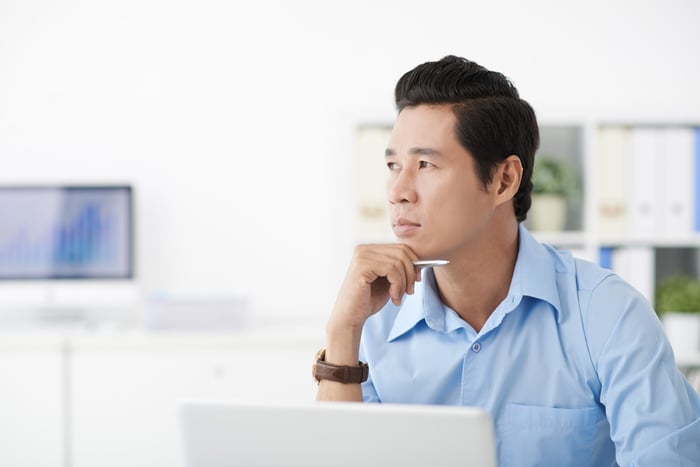 The CEO of Microsoft (MSFT 1.07%), Satya Nadella, has closed the door on the disappointing Steve Ballmer years in part by adapting the company's revenue model and by embracing next-generation technologies. Although the company's software-as-a-service Office 365 product was launched under Ballmer, it has accelerated under Nadella. In the fourth fiscal quarter of 2017, Microsoft reported more subscription-based revenue from Office 365 than from traditional Office licenses.

In addition to Office 365 being cloud-based, the software-as-a-service suite also offers users one terabyte of cloud storage. Microsoft is working to battle Amazon Web Services in the public cloud, both in platform-as-a-service and infrastructure-as-a-service, while taking advantage of the ubiquity of its own software. Last quarter, Microsoft's public cloud product, Azure, grew revenue by 90% year on year.

The shift to cloud-based computing has hurt Cisco as demand for local-access networking equipment has declined. The company is attempting to follow in Microsoft's footsteps to transition to subscription-based revenue. In Cisco's last earnings report, 32% of total revenue came from recurring-based sales, up more than 3 percentage points year on year. In the last quarter, the company produced year-on-year revenue growth for the first time in eight quarters.

Cisco has an eye on the future, recently announcing its intent to purchase BroadSoft to extend its service-based cloud offerings. Additionally, Cisco is betting that the Internet of Things will be a huge boost to its line of network switches and routers, as the number of connections explodes.

Perhaps no technology company has fared worse in the shift to cloud computing than IBM. Demand for the company's on-site IT infrastructure -- servers and hard disk drives -- is directly under threat from public cloud providers. IBM has reported twenty-two consecutive quarters of declining revenue as its core business continues to show strain. Billionaire investor Warren Buffett continues to off-load shares of the company, fearing competition from "big, strong competitors."

CEO Ginni Rometty has shifted to "strategic imperatives," which include next-generation technologies like artificial intelligence and cloud. Last quarter the company nearly achieved revenue parity, as these initiatives were 46% of total revenue and grew 11% on a year-on-year basis.

Both are cheap stocks if they can execute

Right now, both Cisco and IBM are value plays, with shares valued at 15 and 11 times forward earnings, respectively, versus the greater S&P 500's multiple of nearly 22. Additionally, Cisco shares currently yield 3.1% and IBM's 3.9%, versus the greater S&P 500's payout of 1.8%. Although both Cisco and IBM are finding it difficult to grow their top lines, it looks like they are finally transitioning their businesses to succeed in the cloud-based era. Value-focused investors should put both companies on their watchlists, and look for further signs of strength.