Please ensure Javascript is enabled for purposes of website accessibility
Log In Help Join The Motley Fool
Free Article Join Over 1 Million Premium Members And Get More In-Depth Stock Guidance and Research
By Rich Duprey - Dec 7, 2017 at 9:15AM

Two struggling industries hope the other can save them.

Two wrongs don't make a right, and two failing businesses joining together don't make a healthy one -- just ask Sears Holdings. So if those are bad ideas, can aligning two ailing industries make them each better?

Retail and restaurants seem determined to find out as more and more specialty retailers add dining options in their quest to bring a larger experiential shopping environment to their customers. 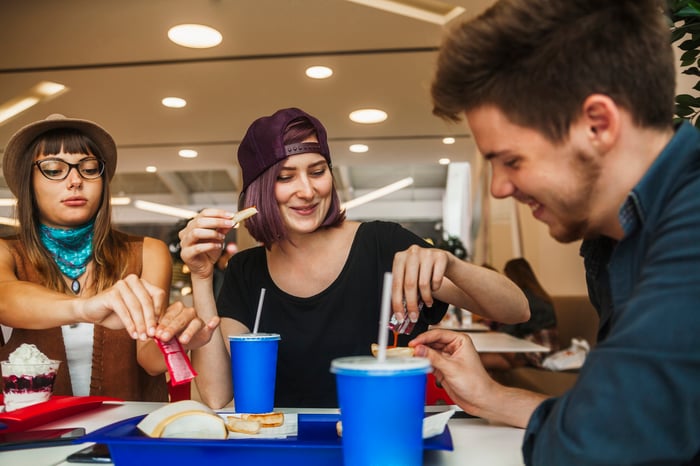 Pairing restaurants and stores isn't really anything new. Macy's (M -1.91%), after all, opened the very first restaurant inside one of its department stores all the way back in 1907 when the South Tea Room opened inside its Chicago State Street store (today the restaurant is called The Walnut Room).

Nordstrom has also operated restaurants in its stores, you can find a Subway or McDonald's inside Wal-Mart, and Target had mini-food courts in its stores before partnering with Starbucks to offer its coffee and baked goods. And you've always been able to buy Swedish meatballs with lingonberry sauce inside an IKEA.

Of course, we've seen more supermarkets start opening restaurants, too, following the lead of Whole Foods Market, which has combined the two for years.

So it's clear restaurants and shopping go hand in hand, and even anecdotally it suggests a reason why so many restaurants want to locate near a shopping mall. After a day of shopping, no one really wants to go home and cook. All the better to have someone do it for you.

But there's the problem. People aren't going out shopping as much anymore, and they're not dining out, either.

According to the latest data from RetailNext, October retail traffic was down 7.5% while sales were down almost 11%. The market researchers at Retail Performance Pulse report e-commerce is continuing to eat away at retail's base. And it's not any better at the restaurants. The National Restaurant Association says 46% of restaurants reported that traffic declined in October, while only 27% reported an increase, the sixth straight month traffic was down. It's leading restaurants, particularly smaller, independent outlets, to try to anticipate the sort of changes customers are looking for.

Sam Ballas, the president and CEO of East Coast Wings + Grill, a fast-growing chain of chicken wings restaurants, says his brand's transition has included not only the restaurant's decor, but its menu as well. While it continues to offer high-quality ingredients and wings, East Coast Wings + Grill's "new menu extends to craft beers, flat breads, burgers, and comfort foods."

Similarly, the CEO and co-founder of Le Macaron French Pastries says she's always looking for ways to make the customer's experience more memorable. Rosalie Guillem was one who "saw food and social media coming together to create one of the hottest trends known as 'Instagramable food,' and we knew this was a trend we could be a part of," leading the patisserie to create food that is as attractive as it is tasty. 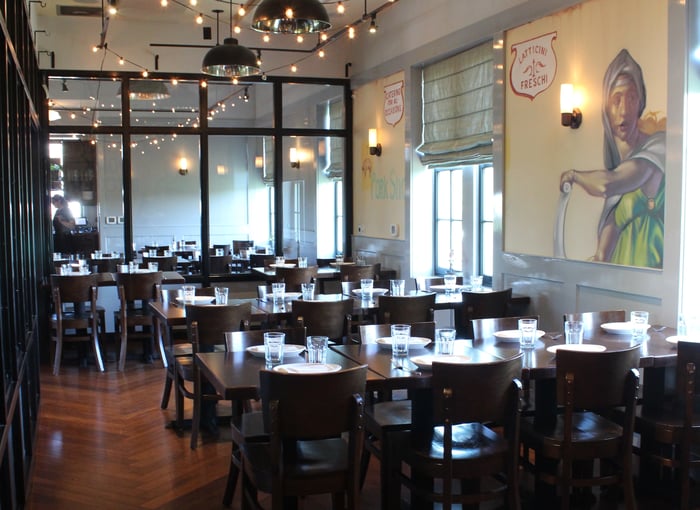 Stick to your knitting

That works well for these upstarts looking to carve a niche out for themselves and could lend itself to their larger brethren trying to reverse some harsh industry trends, but it hardly seems an ideal situation for combining the two industries.

Still, home furnishings retailer RH (RH 3.98%) (formerly Restoration Hardware) is adding a swanky new eatery to its West Palm Beach store, and Urban Outfitters (URBN 2.14%) has acquired an entire seven-restaurant Italian food chain. Food and beverage sales amounted to less than 1% of Urban Outfitters' $2.5 billion in nine-month revenue in 2017, and the restaurants haven't really helped boost overall sales. Third-quarter earnings showed Urban Outfitters' first across-the-board comparable sales increase at each of its store concepts in more than two years, but that was only due to e-commerce sales; comps at its brick-and-mortar stores continue to be negative.

This suggests that retailers should remain true to the brands and stick to their core competency instead of trying to catch the newest fad, even though the idea is to make their stores a destination for consumers and not just a place to buy a new pair of pants. Nordstrom, in fact, has taken that concept to the extreme, creating a neighborhood "hub" store that offers dining options, nail salons, and more -- everything, in fact, except clothes!

In the end, adding restaurants can only create a distraction and lead to a misallocation of resources. If both industries were healthy, then it might make a smart pairing. But if the Sears-Kmart merger taught us anything, it's that you can't make a good business out of two sick ones.