Please ensure Javascript is enabled for purposes of website accessibility
Log In Help Join The Motley Fool
Free Article Join Over 1 Million Premium Members And Get More In-Depth Stock Guidance and Research
By Jamal Carnette, CFA - Dec 9, 2017 at 10:33AM

As the debate heats up, it's important to understand why net neutrality in its current form is imperfect.

Under new FCC chairman Ajit Pai, it appears the net neutrality rules ushered in by former FCC head Tom Wheeler will be overturned. By doing so, Pai finds himself firmly on the wrong side of public opinion: A poll from National Cable and Telecommunications Association (NTCA), an internet-focused trade and lobbyist organization, found that 61% of registered voters support net neutrality. CEOs of popular websites like Facebook (META -5.20%) and Twitter have also spoken out in favor of net neutrality. 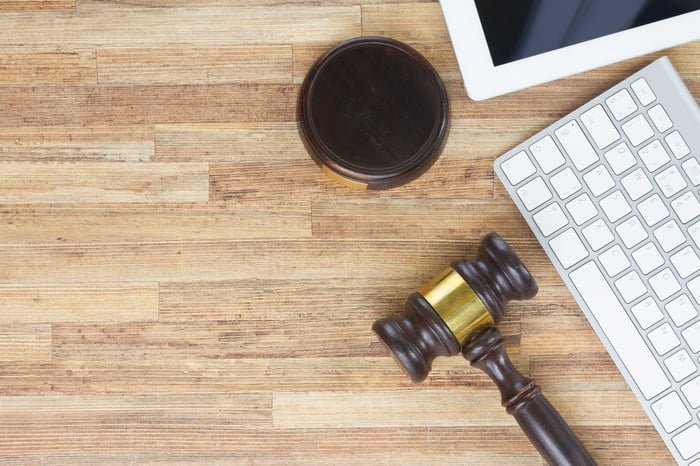 When ideas have popular support, they're often framed as infallible. And while I'm personally supportive of the broad principles of net neutrality, it's imperative to understand both sides of this debate. With that in mind, here's the case for the repeal of net neutrality.

Net neutrality presents a wrinkle on the free-rider paradox

The current billing structure of the internet is mostly an all-you-can-eat approach. While there are still wireless plans that charge data by the gigabyte, the industry is moving to unlimited data plans -- home service broadly shares this billing construct.

Therefore, all customers pay the same or a similar amount regardless of whether they occasionally check email or binge on data-hungry streaming video from Netflix (NFLX -5.04%) all day long. As such, the value-capture mechanism is decoupled from demand, and ISPs are unable to optimize monetization for their networks.

This is a consumer-friendly billing structure, but it presents an underinvestment problem. A Morgan Stanley research report notes wireless service providers are not investing as much in lightning-fast 5G technology in part because the $275 billion collectively spent on 4G has yet to produce significant returns.

Without effective monetization, underinvestment is essentially guaranteed. As my Foolish colleague Adam Levine-Weinberg noted, we could all be doomed to internet slow lanes. Net neutrality hampers the ability of ISPs to charge consumers more for data-intensive usage, which leaves ISPs unable to create faster internet across the board.

Net neutrality may not be as consumer friendly as you think

Broadly, wireless consumers want the ability to stream as much as they want. However, after a certain data cap is reached, wireless providers will slow, or throttle, your connection. While throttling is disallowed under net neutrality, there's an exception for "reasonable network management." In 2015, T-Mobile (TMUS -2.57%) offered its Binge On plan, where streaming video content from Netflix and Hulu did not count against that soft cap.

Net neutrality advocates accused T-Mobile of violating its tenets. Specifically, ISPs are not allowed to prioritize or discriminate against content. By excluding Netflix and Hulu from the soft cap, a practice known as zero-rating, net neutrality advocates argued that T-Mobile disadvantaged services from other businesses like YouTube. In the end, it appears most consumers appreciated the offering as T-Mobile has continued to grow its subscriber count thanks to its innovative, consumer-friendly approach. Meanwhile, other wireless providers have copied the Binge On program to defend their subscriber bases.

A second, more pernicious example is the demise of Facebook Basics in India. To bring internet access to those unable to afford the service in the world's second-largest country, CEO Mark Zuckerberg partnered with other tech companies to offer a service free of charge. However, the consortium needed providers to opt in, which meant only certain sites and services would be allowed on the Facebook Basics platform. This broadly violates the net neutrality provision of blocking sites.

In a country where more than 70% of the population lacks internet access, the country ruled against Facebook and disallowed the service. While this is a win for net neutrality advocates, Indian start-ups, and Indian ISPs, it's a loss to the vast majority of people who will continue to fall behind in the digital era. Renata Avila, a manager of Web We Want, noted after the victory, "The message is clear: We can't create a two-tier internet -- one for the haves and one for the have-nots." Personally, I'd counter by noting India already has a two-tiered Internet -- the Internet for the haves and no Internet for the have-nots.

Light-touch regulation has worked for the internet

Determining the proper level of regulation is difficult. Apply too many rules, and you'll stifle competition, new entrants, and innovation; apply too little, and you end up with disasters like the financial crisis. It's a continuum. By declaring ISPs common carriers under Title II regulation, Wheeler applied strong regulation -- Pai wants to return to a Title I regulatory approach.

Most observers will note the FCC has always been a light-touch regulator, with critics noting the commission is essentially a revolving-door with lobbyists and industry professionals filling its ranks. Wheeler, the former chairman under the Obama Administration, was CEO of Cellular Telecommunications and Internet Association and president of the NCTA before taking over the regulatory body. Former Bush Administration chairman Michael Powell is the current NCTA president.

While there have been issues, this approach has broadly worked for the internet. More than any other industry in the last two decades, the internet has created more millionaires, more wealth, and more jobs than any other industry. Additionally, it's maintained U.S. hegemony in the business world with the top four public companies by market cap all being internet-based businesses: Apple, Alphabet, Microsoft, and Amazon. If anything, ISPs need protection from these giants, not the other way around.

Finally, the most egregious violations of net neutrality -- slowing down traffic from sites an ISP doesn't agree with, favoritism of an ISPs own businesses or partners, or the outright blocking of content -- should result in swift pushback from consumers.

Net neutrality repeal is often framed in apocalyptic terms with supporters promising the end of the internet as we know it. However, repeal of Title II could also support an innovative and consumer-friendly internet ... like the one we've enjoyed for the last 20 years.