When Niantic's Pokemon Go game launched in early 2016, it helped bring augmented reality (AR) to the forefront of many consumers' minds. And while the hype around catching virtual Pikachus in a public park has subsided a bit, the idea that AR could be one of the next transformational technologies hasn't. Augmented reality technology overlays computer-generated images on a person's view of the real world, and it's used for much more than games.

AR is still in its early stages, but augmented reality glasses and software are already being used as a tool to train workers on how to repair manufacturing equipment and to teach new surgeons how to best perform their jobs. It's no wonder, then, that AR has the potential to become a $61 billion market by 2023, according to Research and Markets.

There are plenty of companies pivoting to this growing AR market. Taking the lead are Apple (NASDAQ:AAPL), Microsoft (NASDAQ:MSFT), and Facebook (NASDAQ:FB), and they are likely to see a lot of growth from AR in the coming years. 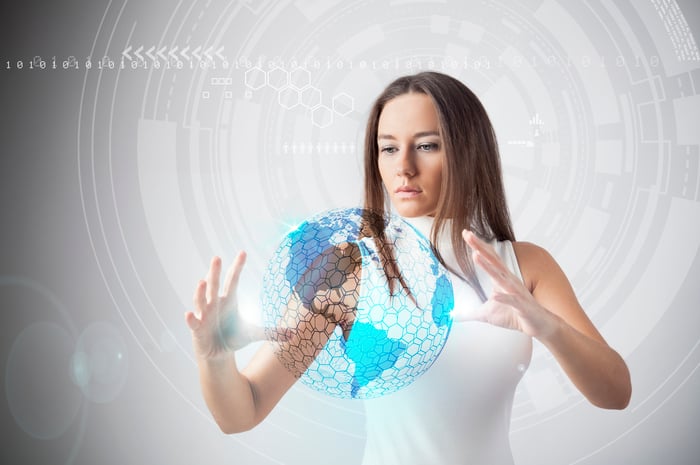 The consumer tech world is still fawning over the new iPhone X, but a recent Bloomberg report continues to give credibility to the rumor that Apple is working toward launching an augmented reality headset in 2020.

The company took a huge step into AR this year when Apple made its ARkit available to developers, which allowed them to start building AR apps for iOS. Bringing augmented reality apps to millions of iPad and iPhones around the world was a huge first step, but an AR headset would likely be even more pivotal for the company.

The rumored device is expected to have a completely new operating system, called rOS. It's expected to have a new system-on-a-chip (with a CPU, graphics, and artificial intelligence processors) designed by Apple, and will be a stand-alone device that won't require a smartphone to function.

Bloomberg's report came several months after Gene Munster, a longtime Apple analyst who recently started his own venture capital firm, said that Apple was working on a pair of glasses (or headset) that might eventually take the place of the iPhone as the company's cash cow. As Munster noted in June, "In 10 years, we expect the iPhone will be around but be a much smaller part of Apple's business as Apple Glasses slowly gains market adoption."

This is still a long way off, of course, but Apple CEO Tim Cook has made it very clear that his company is expecting big things with augmented reality. On the fiscal fourth-quarter 2017 earnings call, Cook said, "Put simply, we believe AR is going to change the way we use technology forever."

Investors looking for a strong consumer tech play in augmented reality would be wise to keep tabs on the AR rumors surrounding Apple. Sure, the headset or glasses could turn out to be just speculation, but the company has hinted -- as much as Apple ever does -- that augmented reality is going to be a big focus for the company from now on. And I wouldn't be surprised if its next big device has something to do with AR, even if it's different than what we're hearing about right now.

I can't talk about Apple's potential AR headset without mentioning what Microsoft is already doing with its AR headset, called Hololens. The device was released back in 2015 and has since become one of the only successful augmented reality -- or mixed reality, as Microsoft calls it -- headsets on the market. 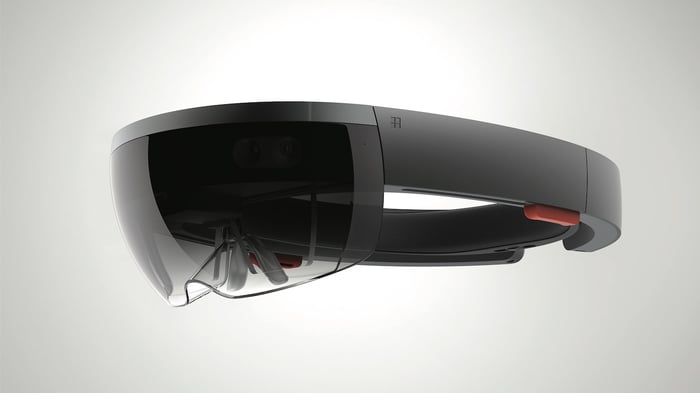 Since its launch, Hololens has slowly expanded from a pet project for Microsoft into a small but growing business. The company sells the devices to developers for $3,000 and charges $5,000 for a beefed-up version (with more security and enterprise features). Some large companies have bought into the device. For example, Hololens is being used by Ford's designers to evaluate current designs and make it easy to make digital changes to clay models and see them in real time.

Hololens recently received an IP50 rating for dust protection, and Microsoft said that it will release an optional hard hat that's compatible with the device next year, which means Hololens will soon be ready for use on construction sites.

Microsoft recently ramped up its efforts to get Holoens into more customers' hands by expanding sales into 29 countries, which brings the total to 39. It may have started off slowly with AR, but its recent moves prove that it sees AR as a viable future market. The company says it will release a new version of Hololens in 2019, complete with its own artificial intelligence chip for recognizing objects in a user's line of sight.

Though Microsoft doesn't currently break out Hololens revenue, investors should note how the company is taking an early lead in the AR hardware and software space and know that it's likely Microsoft will focus more of its attention on Hololens in the coming years.

CEO Satya Nadella said in an interview recently that Microsoft's cloud business is driving its growth right now, but that he's looking ahead to what's next. "... I believe the next big waves are going to be these two -- mixed reality and A.I. and we definitely are on the forefront of it," he said.

It's not just software and hardware makers that are tapping into the AR market, of course. Facebook has already introduced its vision for augmented reality in the social space through its release of AR Studio and Camera Effects in 2017.

AR Studio is the platform that allows developers to create video filters and effects -- similar to filters in Snap Inc.'s Snapchat app -- for the Facebook app. The platform is still in its early stages, but it debuted alongside something new called Camera Effects. Camera Effects is a feature in the Facebook app that allows users to access those filters and effects, take a video or picture, and then share it with their friends.

Facebook also recently debuted AR filters in its popular Instagram app, which was a move to usurp Snapchat as the go-to app for augmented reality filters and effects. But Facebook hasn't ruled out releasing its owns AR headset or glasses, either. CEO Mark Zuckerberg told Recode earlier this year that AR glasses could soon be a huge part of how people consume their online content,

Zuckerberg also demonstrated at the company's 2017 F8 Developer conference how users could use Facebook AR features in the future to point to an object with their camera and then see a card pop up with relevant information or even a buy button for an app or an item.

He shed more light on the company's future AR plans on a recent earnings call, saying, "...there are lots of different ways that, over time, this kind of content is going to both augment existing real-world objects and eventually replace them, which I think is going to be an interesting opportunity, maybe not on augmented reality on the phone but on glasses eventually when you have that."

These companies aren't breaking out their augmented reality revenues at the moment because, well, there basically aren't any right now. Investors need to understand that AR is still a developing market and all of these companies are still at the very beginning stages. But patient investors who recognize the full potential of AR and how these companies will benefit have much to look forward to.