After delivering its first Model 3 units to customers at the end of July, Tesla (NASDAQ:TSLA) totally whiffed on its third-quarter target for Model 3 deliveries, producing far fewer units than management anticipated. Tesla had said it expected to produce about 1,500 Model 3 units in its third quarter, but it actually only built 260 units and delivered just 222.

The slower-than-anticipated ramp-up of Model 3 production ultimately led to a delayed production and delivery schedule, raising concerns about the electric-car maker's ability to meet its ambitious targets. But if a growing number of Model 3 sightings, as well as hundreds of Model 3 vehicles spotted at a delivery center near its factory in California, are any indication of how production is faring, the automaker may finally be ramping up production.

The first positive sign of improving Model 3 production came just before Thanksgiving, when Tesla confirmed to the media that it was opening up the Model 3 configurator to nonemployee reservation holders in order to convert reservations into orders. Tesla had always planned on initially only delivering the vehicle to employees as it worked out any kinks before the vehicle was more widely available.

Since Tesla confirmed sending out an initial batch of emails to some nonemployees to configure their Model 3, the company sent out another group of emails to regular reservation holders, according to Electrek. The second batch of emails was sent out earlier this month.

Now Electrek is reporting that "hundreds" of Model 3 units are parked at one of Tesla's delivery centers in California. That marks the highest concentration of Model 3 vehicles seen in one place, and it suggests production has increased significantly from the 260 units it produced in Q3.

While these are promising signs, they are nothing to get excited about. Tesla has well over 400,000 deposit-backed reservations for its Model 3 as of last count. Furthermore, the electric-car company is ultimately aiming to increase Model 3 production to a mind-boggling 10,000 units per week. Today's production, therefore, is minuscule compared to where Tesla wants to be. 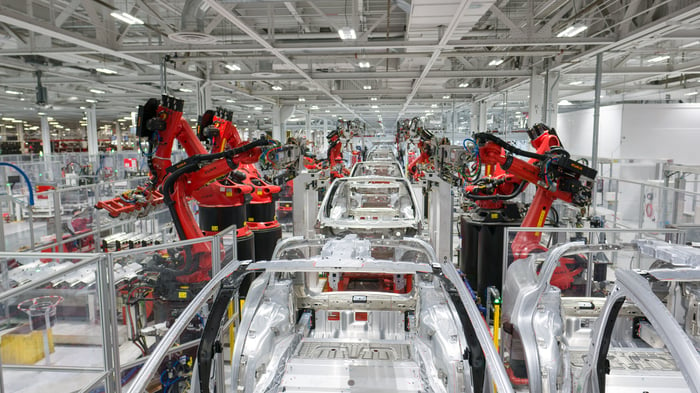 After scaling back its targets when it disappointed on third-quarter Model 3 production, Tesla said it expected to achieve a weekly Model 3 production rate of several thousand units before the year is over -- lower than its initial target of 5,000 units per week. But even after sightings of hundreds of Model 3 units ready for delivery, it remains unclear whether it's close to achieving this feat.

Looking to its first quarter, Tesla is now aiming to achieve a weekly production rate of 5,000 units a week toward the end of the period. This aggressive target is now only around three months away. So, it shouldn't be surprising to see Tesla ready to deliver hundreds of vehicles at a time as the year ends.