Please ensure Javascript is enabled for purposes of website accessibility
Log In Help Join The Motley Fool
Free Article Join Over 1 Million Premium Members And Get More In-Depth Stock Guidance and Research
By Eric Volkman - Dec 14, 2017 at 10:46AM

The deep-discount retailer's latest quarter didn't blow anyone away, but did reveal some solid growth.

You might consider spending a few dollars on shares of Dollar General (DG 1.25%). The deep-discount retailer put up some good numbers in its just-reported Q3. 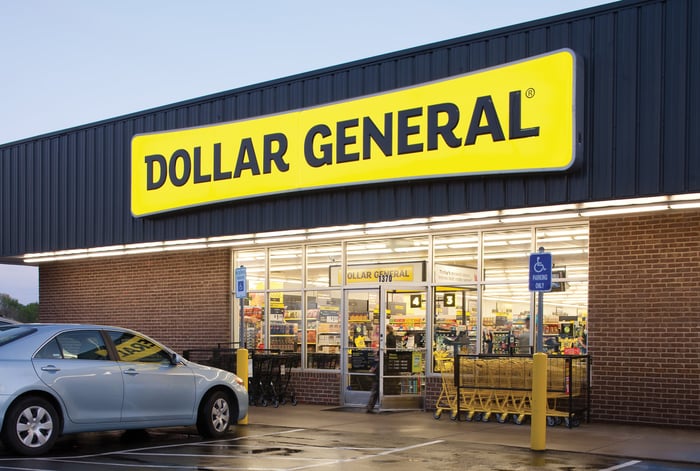 For the quarter, Dollar General's net sales rose by 11% on a year-over-year basis to land at $5.90 billion, on same-store sales growth of 4.3%. On the bottom line, the company netted $252.5 million ($0.93 per share), a 7% improvement. Both results were close to the average analyst estimates, which anticipated $5.8 billion in net sales, and earnings per share of $0.94.

Other operational metrics, such as the average transaction amount and overall customer traffic, also rose in the period. Another factor driving sales higher, according to Dollar General, was the effect of hurricanes Harvey and Irma. But the effect was mixed -- although the natural disasters brought in customers (hence the sales boost), they added operating expenses for the company, leeching an estimated $13 million from net income.

Geography and an aggressive building program are also helping lift results. In a conference call to discuss the Q3 results, CEO Todd Vasos said that the company has been particularly successful in regions where it recently built new stores. According to him, "some of our highest sales performance is coming from areas where we historically have not had a presence."

The company's store count has risen notably over the past few years. At the beginning of 2015, it had just under 11,800 outlets throughout the country. As of last month, that count was 14,321. More will be springing up -- Vasos says that Dollar General plans to have opened 1,285 new stores this year, and renovated 760. Those two counts for 2018 are expected to be 900, and 1,000, respectively.

That should keep the growth fire burning -- in sales, anyway. Dollar General has tightened its guidance for the entirety of fiscal 2017. It now expects a 7% year-over-year increase in overall net sales, same-store sales growth of 2.5%, and -- due to lowered estimates for capital expenditures -- EPS of $4.37 to $4.50.

Dollar General is a simple idea executed well, and a business that is expanding sensibly. Many of its stores are in rural areas, providing a local, low-cost shopping option for communities not otherwise well served by retail.

Although the "retail apocalypse" is somewhat overstated, it is having an effect on some of the more traditional companies in the sector.

The great advantage enjoyed by Dollar General and its peers, most notably Dollar Tree, is that their businesses aren't primed for online disruption. That's because they work best as shop-in-person venues for low-priced staples or what-the-heck-it's-only a-buck impulse buys. As such, they're much more resilient in the face of e-tailing than their higher-end cousins.

(You can read about Dollar Tree's most recently reported quarterly results here.)

Given the recent results of both Dollar General and Dollar Tree, it's clear that there are plenty of customers willing to stop in and buy inexpensive merchandise from such retailers. I don't see that trend dying down anytime soon, so I believe discounters as a category, and Dollar General specifically, should continue to thrive.