With a deal to buy Instacart rival Shipt, the company takes a big step up in same-day delivery.

The big-box chain said it would acquire Shipt -- an online grocery marketplace known for same-day delivery -- for $550 million. The move is reminiscent of Walmart's (WMT 0.29%) own decision to acquire Jet.com for $3.3 billion, which has paid off immensely, or Whole Foods Market's strategic investment in Instacart before it was acquired by Amazon.

Like Instacart, Shipt specializes in same-day delivery of online orders, working with a range of retailers. Target said it would "leverage its network of stores and Shipt's proprietary technology to quickly and efficiently bring same-day delivery to guests across the country."

The company also said the acquisition would allow it to provide same-day delivery services at half of its stores by early 2018, and at a majority of its stores in all major markets by the holiday season next year.

Investors cheered the move sending Target stock up on the news. Shipt will be a wholly-owned subsidiary but run as an independent business. 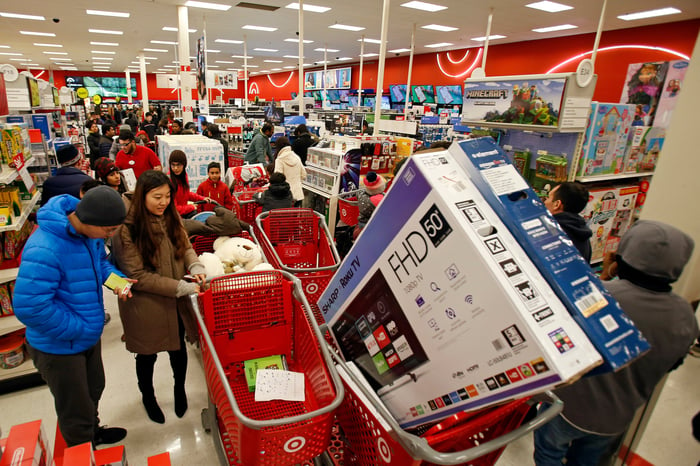 A fight on several fronts

Unlike Amazon, which continues to expand at a breakneck speed, and Walmart, which has successfully pivoted to e-commerce with its Jet acquisition and online grocery pickup expansion, Target is struggling to find its identity in the changing retail landscape.

The stock is still down 14% year to date, trending with a broader malaise in retail, and the company finally snapped a streak of four straight quarters of comparable sales declines earlier this year. A decade ago, Target's "cheap chic" brand was a source of strength, but that advantage has eroded over the years, and the company has yet to find a replacement.

Target launched fresh groceries in 2010, but the initiative has mostly fallen flat as the chain has been unable to reach the grocery penetration rate that rivals have. Whereas groceries make up a majority of sales at Walmart and Costco, they contributed just 22% of revenue last year at Target. The company has also historically suffered from high prices, less selection, and more spoilage than its peers in the category.

While groceries haven't proven to be the company's savior, its deal with Shipt signals what the company sees as its next focus and what it hopes will be a new advantage.

More than any other retailer, Target wants to be all things to all people. The company's breadth of merchandise is only matched by few competitors, and Target is the only one to offer a broad range of retail formats to cater to different customers. It has its traditional discount stores as well as SuperTargets, which offer full grocery departments, and smaller footprint stores designed to fit in urban neighborhoods that were once known as CityTarget and TargetExpress but are now just called "Target" as well.

At a time when rivals have essentially stopped opening stores, Target is doubling down on the small-store strategy in order to squeeze more sales out of cities where it has historically had an edge over its larger competitor. Its same-day delivery e-commerce strategy, based on its acquisition of Shipt and the earlier purchase of supply chain logistics specialist Grand Junction, complements the small-store strategy well. Target can use those locations as hubs for deliveries, which is exactly what a company like Shipt is set up to do. Since none of Target's rivals have the urban, small-store network that it does, tapping it to provide same-day delivery could prove to be a competitive advantage for the retailer.

It won't be easy as Amazon already offers its Prime Now service, which provides delivery in as little as one hour in more than a dozen metropolitan areas, and Walmart is rapidly expanding its own online grocery pickup program, but Target is clearly moving in the right direction.

Target shares got crushed when the company unveiled its turnaround strategy back in February, which seemed to borrow from a similar Walmart announcement in 2015, as Target promised to invest in e-commerce, remodeling stores, and raising wages. But the strategy seems to be the right call -- Target's performance has steadily improved since then.

While the Shipt acquisition alone may not be a game changer, it'll help Target in the increasingly important same-day delivery category, and it shows that management understands the company needs to move fast just to keep up in today's environment.