This job listing essentially guarantees the company will make a run to host NFL content.

Facebook (META -3.34%) appears serious about its intentions to live-stream sports. According to the Sports Business Journal, the social-media site is openly looking for a "top-level executive who will broker sports rights deals" and will have a budget of a "few billion dollars" to spend on global sports content.

In the wake of losing the bid to stream Thursday night football games to Amazon.com, Facebook has quietly waded into acquiring the rights to sports-related content. In May, Facebook announced a partnership with Major League Baseball to livestream 20 games. Three months later, the social-media site inked a deal with digital broadcaster Stadium to stream 15 Conference USA and Mountain West college football games.

With this job listing, Facebook appears more serious. Will you be able to watch the NFL on Facebook next year? 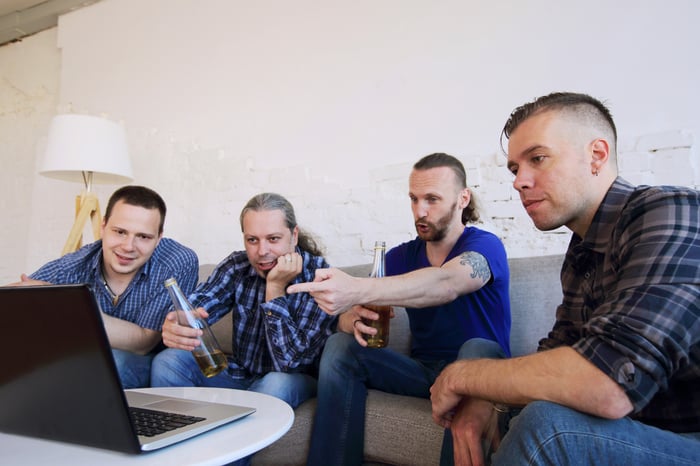 In sports, a "few billion" is still hobbyist money, but Thursday night football is an option

When it comes to sporting rights, a "few billion" doesn't go far. In September, Recode noted that the company bid $600 million for a five-year deal to stream cricket matches from the Indian Premier League, losing out to 21st Century Fox's Star India media property, which paid $2.6 billion for both streaming and broadcast rights. While cricket has a huge following, these rights are considered downright cheap compared to the NFL.

The Walt Disney Company's (DIS -0.03%) ESPN spent an estimated $7.3 billion in content last year, with its Monday night football contract costing $1.9 billion alone. While ESPN's contract also confers the right to highlights and replays, the contract covers only 17 games, or approximately 55 hours of live content. Disney's contract with the NBA for $1.73 billion has more live action but is nearly as expensive.

Considering the NFL's deal with ESPN is for broadcast rights, streaming rights are relatively cheaper, but they're still expensive. Verizon is rumored to have paid $21 million for the exclusive rights to stream one game. And it appears the price of exclusive streaming is quickly increasing, as Verizon paid 40% more than the $15 million Yahoo! shelled out for the same rights in 2015.

With Facebook's current budget, it's likely the best fit is for the company to win next year's Thursday night football rights. Amazon.com paid approximately $50 million for the non-exclusive streaming rights in 2017, an increase of 400% from the $10 million Twitter paid last year.

Investors in the social-media site don't need Facebook to become the next ESPN or even a significant sports streaming provider. Facebook's true intentions are to keep eyeballs on its site for as long as possible. If it's because they're watching the big sporting event or scrolling their feed for posts from friends, it makes no difference. In fact, user-generated content is cheaper and more beneficial to Facebook's bottom line.

For ESPN, this is expected but still unfavorable news. Disney's stock has been under pressure over the past few years specifically related to its ESPN family of networks and its cost of sports-related content. While it should be noted that Disney/ESPN doesn't own Thursday Night Football broadcast rights, and it's doubtful the company will enter into the bidding process once it begins, it signifies robust demand for sports content, which should keep the price of this content high for the foreseeable future.

If any company can adjust, however, it's Disney with its diversified content and businesses. The future of Disney is still bright, but will most likely be led by its movies and theme-parks business units.