Not many tech companies hike their payouts by 76% in one shot. Broadcom just did.

By and large, companies in the tech sector don't usually pay out dividends. And those that do seldom raise their payouts by meaningful amounts.

One happy exception to these norms is telecom and IT equipment maker Broadcom (AVGO -1.64%), which recently declared a generous 72% hike in its quarterly distribution. Let's take a closer look at why the company did so, and, more importantly, whether the new payout is sustainable. 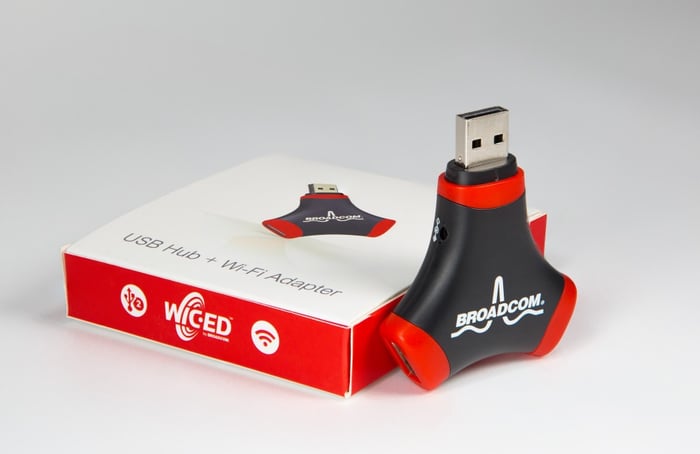 In the fourth-quarter and fiscal 2017 reports that also included news of the dividend hike, Broadcom spelled out its key reasons for the boost. It pointed in particular to "very strong fiscal 2017 financial results, and continuing momentum into the new fiscal year."

It's hard to argue those points. For the year, the company grew its net revenue by 17% to almost $4.85 billion. Adjusted net income improved by 12% to $2.09 billion. All four of the company's divisions posted gains in revenue, with three up by double-digit percentages.

The most impressive jump (not surprisingly) was made by the wireless unit (i.e., smartphones and mobile devices): The wireless unit rose a beefy 33% to nearly $2.15 billion. Broadcom, after all, is a major supplier to smartphone and tablet makers.

Such companies aren't going to suddenly stop requiring components for their popular goods, so the future looks good for Broadcom. It's predicting that in fiscal 2018, it will book between $5.22 billion and $5.37 billion in net revenue, which would amount to growth of at least 8% on the 2017 result. (It did not provide an estimate for net profit.)

Broadcom has plenty of dosh for such a hefty dividend raise. On a trailing 12-month basis, its free cash flow climbed markedly to $4.9 billion. That has provided far more than enough coverage for both the dividend and a set of share repurchases. Even a 72% increase in the distribution isn't going to change that dynamic much. 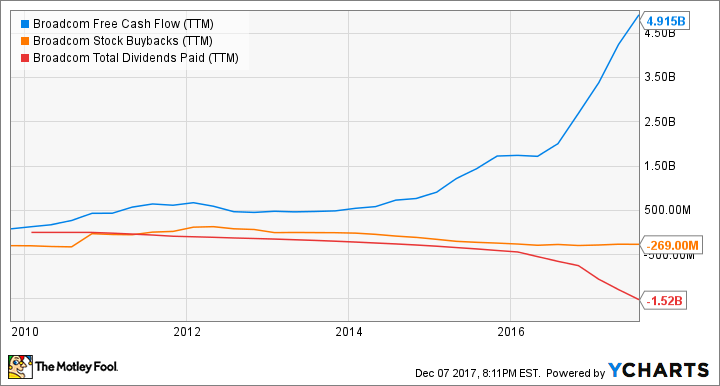 What's more of a risk in the immediate future is Broadcom's play for master chipmaker Qualcomm (QCOM -3.30%). Last month, Broadcom launched an unsolicited $103 billion cash-and-stock buyout offer, which was unceremoniously rejected. The cash component would have amounted to roughly $88 billion, which (it almost goes without saying) would necessitate debt financing.

Broadcom, a serial acquirer, is continuing its pursuit of Qualcomm. At this point, we can't factor a potential acquisition into our evaluation of the health of the new dividend; we'd need to know details like the scope of the deal, Broadcom's financing arrangements and, of course, whether it'll succeed in its pursuit in the first place.

Broadcom is a bold, brash, and ambitious company. As things stand now, it can easily support its generous dividend hike. We can't say that confidently, however, if its proposed marriage with Qualcomm takes place; the income interest alone on any debt financing could hit profitability and cash flow hard. So income investors considering Broadcom need to take that uncertainty into account.

Even after that big raise, Broadcom's payout ratio is a still-reasonable 38%. The dividend yields 2.7% on the company's most recent closing stock price, and will be paid on Dec. 29 to shareholders of record as of Dec. 19.