Please ensure Javascript is enabled for purposes of website accessibility
Log In Help Join The Motley Fool
Free Article Join Over 1 Million Premium Members And Get More In-Depth Stock Guidance and Research
By Maxx Chatsko - Dec 15, 2017 at 7:45AM

The shipping industry has been treading water lately, but that could set the stage for a comeback opportunity for well-positioned companies.

The global shipping industry has been a sinking ship in recent years. A glut of containers, overleveraged balance sheets, and revoked or sharply reduced dividends have pushed many leading stocks into a steep downward spiral. It hasn't been pretty for shareholders.

That said, some companies are better positioned than others to begin clawing their way back to sustainable operations. That reality is certainly on display with two former investor favorites, Textainer Group Holdings Limited (TGH 1.58%) and Nordic American Tanker (NAT 3.70%). The former has been on a tear lately, while the latter is still trudging through difficult decisions in an attempt to stabilize operations.

Despite the divergent trajectories for the two stocks in 2017, investors may be wondering if there's more upside in Nordic American Tanker. Which shipping stock is the better buy? 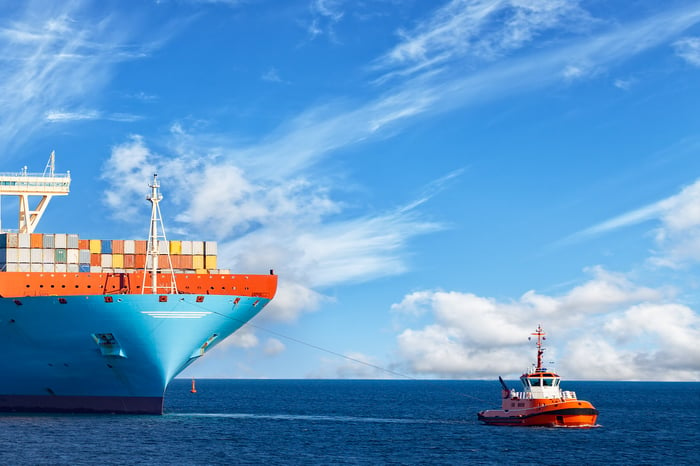 Summarizing the price moves as "divergent trajectories" may be putting it mildly.

Textainer Group Holdings has seen its fortunes rise throughout 2017 thanks to a dramatic turnaround in the container market, which has been partially driven by new paint regulations in China (really). The company's shipping container fleet, the second largest in the world, is relatively young and ready to take advantage of the unfolding opportunity.

Unfortunately, the same bullish overtures have not extended to the vessels lugging those containers over the world's shipping routes. Nordic American Tanker has been suffocating under the weight of its debt this year, a struggle that has become more pronounced as the year has dragged on. That's not too surprising considering tanker rates today are about one-third of their historical average. That forced the company to offer $110 million in stock to keep its head above water and fund the completion of three newbuild ships due for delivery in 2018.

The stock performance pretty much says it all. 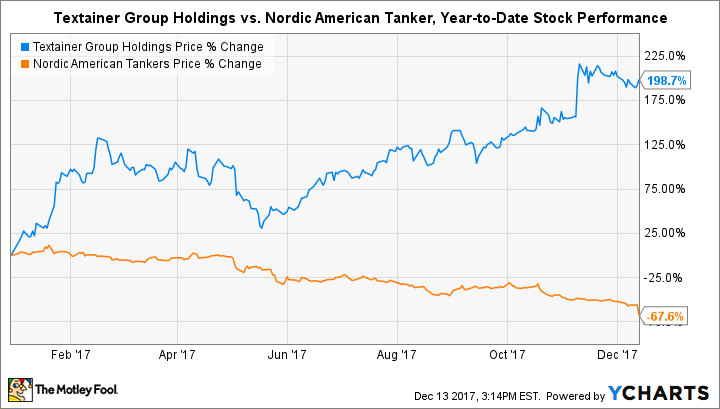 Then again, given the fact that the share offering had no trouble finding buyers, investors may be curious if the dilutive event marks a buying opportunity. Nordic American Tanker stock also boasts several relatively subdued valuation metrics, especially compared to Textainer Group Holdings.

Does that make Nordic American Tanker worth a gamble for high-risk investors? Well, not entirely.

The third-quarter 2017 performance turned in by the tanker leader was its worst in years. Although management predicted the quarter would be the low point -- perhaps hinting that a long-awaited turnaround is within sight -- there's an awful lot of ground to make up.

Investors should consider that this likely will be a multiyear turnaround story at best. The global Suezmax fleet, which includes all of the company's 33 vessels, is expected to hit 498 ships by the end of 2017. There were 56 vessels delivered during the year -- a multiyear high. While those numbers are expected to drop to 33 vessels in 2018 and just seven vessels in 2019, it will take time for fleet operators to offset the sudden surge from the last 12 months. In other words, don't expect a sudden improvement in the industry's health in the form of improving daily shipping rates.

On the flip side, the shipping container market continues to improve, which should continue to boost Textainer Group Holdings stock. The container lessor finally returned to profitability in the third quarter of 2017 thanks to rising prices for leases driven by a shortage of available containers. The timing couldn't be better: Leases signed during the recent low point are expiring, which means those containers will be released under much more lucrative contracts in the near future. That creates impressive upside from incremental revenue alone in the next few years, even before new containers are considered.

This one's not really close: Textainer Group Holdings is the better stock to buy. Nordic American Tanker is simply too risky and likely will continue to face strong headwinds for the next several quarters at least. Tanker day rates could climb again in the future, but it could take years for the global fleet to find a balance between supply and demand -- and that requires the global economy to cooperate, too.