Please ensure Javascript is enabled for purposes of website accessibility
Log In Help Join The Motley Fool
Free Article Join Over 1 Million Premium Members And Get More In-Depth Stock Guidance and Research
By Rich Duprey - Dec 15, 2017 at 5:05AM

The deep discounter looks to expand its footprint, while larger retail rivals reduce theirs.

A dollar and a dream might buy you a lottery ticket to riches, but Dollar General (DG 1.76%) is taking a different path to financial glory. The deep discount retailer unveiled a 2,000 store growth plan for next year that will see 900 new stores opened, 1,000 renovated, and 100 relocated.

Don't discount the power of cheap

The dollar store concept is one of the few retail concepts that's working. Where most retailers are trying to reduce their footprint, the leading dollar chains are expanding. Through the first three quarters of 2017, Dollar General opened over 1,000 new locations and remodeled or relocated more than 700 others, giving it a total of 14,321 stores in operation. 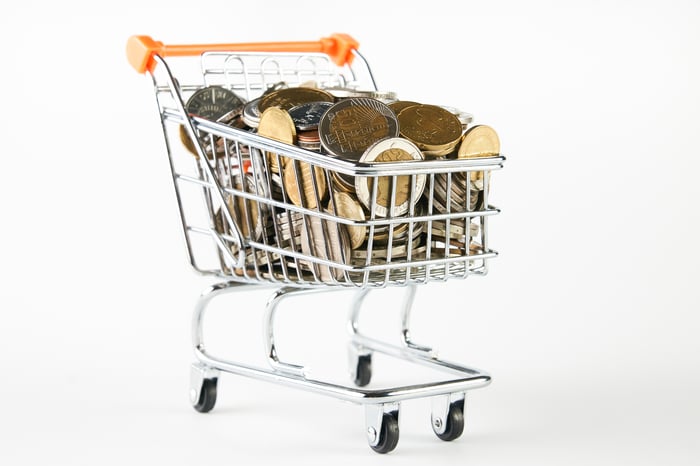 Rival Dollar Tree (DLTR 1.09%), which operates 14,744 stores under banners, including Dollar Tree, Family Dollar, and Dollar Tree Canada, opened 466 stores so far this year and ultimately believes it can have as many as 10,000 Dollar Trees and more than 15,000 Family Dollars across the U.S.

Despite an improving economy, many people still struggle financially, and the deep discount chains are proving to be an effective way for consumers to stretch their wallets further. While the dollar stores still largely function as a destination for fill-in shopping, as they expand their food selections and increase the amount of perishables they offer by installing more refrigerators and freezers, they're increasing both the number of visits consumers make as well as the basket size.

A warm reception to coolers

In fact, Dollar General says that year to date, approximately 18,000 cooler doors have been installed in its existing stores, and of those that had additional coolers added to their floor plan, they continue to see an improvement in the number of transactions. Across all its stores, Dollar General has an average basket size of about five items and an average ticket of approximately $12.

Similarly, Dollar Tree says it continuously adds new refrigerators and freezers, and both its consumables and discretionary items enjoyed comparable-sales growth north of 4%.

Getting close to you

The new aggressive growth plan Dollar General is rolling out means it intends on continuing to encroach on the space Wal-Mart Stores has staked out. The company estimates that by year end, 75% of the U.S. population will be within five miles of a Dollar General. Meanwhile, there's a Walmart within 10 miles of 90% of the population.

Dollar General can afford this aggressive expansion, because it keeps such a tight lid on expenses. Year to date, it has operating margins of around 8%, comparable to Dollar Tree and about twice as much as Walmart.

While the deep discounters serve primarily low to middle-income families, more middle to upper-income families are beginning to shop their stores, too. According to Nielsen data, 43% of customers with household income of $29,000 or less said they frequented a dollar store last year, but also 23% of those earning more than $70,000 indicated they shopped at dollar stores.