The South Korean conglomerate's weaknesses in software and services could doom the device.

Smart speakers are here to stay, and Samsung is the latest tech giant that is interested in jumping into the market. Archrival Apple recently announced that its forthcoming $349 HomePod would be delayed until early 2018, while Alphabet subsidiary Google (GOOG 1.17%) (GOOGL 1.16%) just launched its $399 Google Home Max this week. Social network Facebook is even considering a smart speaker, and of course there's Amazon.com's (AMZN 0.73%) market-leading Echo family.

Samsung mobile chief DJ Koh confirmed to CNBC in August that the company was indeed working on a smart speaker, but didn't share any details at the time. Does the South Korean conglomerate stand a chance? 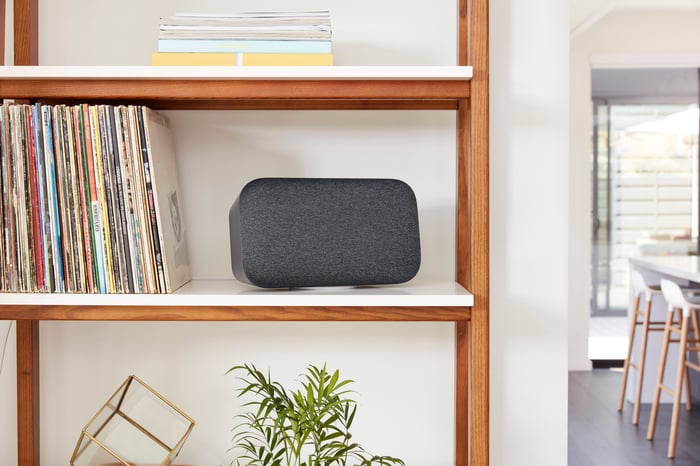 What to expect from Samsung's smart speaker

Bloomberg reported yesterday on some rumored details regarding the product. Samsung is targeting a launch in the first half of 2018, which would put its release close to Apple's HomePod (the Mac maker didn't specify timing beyond "early 2018"). Samsung is said to be focusing on audio quality and smart-home technology, and will be powered by Samsung's own virtual assistant, Bixby -- table stakes for modern smart speakers.

Samsung acquired smart-home platform SmartThings way back in 2014, which could spearhead the company's renewed push into smart-home devices. Bloomberg's source says that the prototypes are comparable in size to the new Echo and the HomePod. Samsung may also be rather aggressive on pricing, and the device could cost just $200. That would undercut HomePod and Google Home Max but be comparable to products like the new Sonos One, which has Amazon Alexa integrated directly.

Arguably the most important feature of any modern smart speaker is the voice assistant that powers it. Alexa has emerged as a frontrunner thanks to an expansive catalog of third-party Skills, which now number over 25,000. Google Assistant is making solid gains, while Siri continues to be underwhelming.

Samsung was late to the game with Bixby. The virtual assistant is far behind its competition and garners negative reviews across the board. In particular, Bixby's voice recognition is very poor, which is a potentially fatal flaw for this product category. It's hard to overstate the importance of the virtual assistant; since most smart speakers lack displays and rely almost entirely on voice-based interfaces, poor voice recognition translates into a terrible user experience because the user often can't control the device.

As is often the case, Samsung's smart speaker will probably have very good hardware, but relatively lackluster software and services. It's no coincidence that Amazon and Google -- which controlled 92% of the smart speaker market in the third quarter, according to Strategy Analytics -- have very strong offerings across software and services, suggesting those considerations matter more than hardware quality.

Samsung will be facing an uphill battle.