Analysts keep thinking the worst may be over the peer-to-peer consumer lending giant.

One of the biggest duds of the 2014 IPO class is showing signs of life, but it probably won't be enough to stop it from closing lower for the third year in a row. Shares of LendingClub (LC 1.20%) rose 14.8% after yet another analyst suggested that better times may be ahead for the peer-to-peer consumer lender. A prominent investor also increased his stake in the dot-com laggard.

Michael Diana at Maxim lowered his price target on the stock from $8 to $6 on Monday, a move that may seem like a negative development, but it's actually pretty bullish, with the stock closing at $3.51 the week before. Diana's new price goal suggests a hearty 71% of upside. The wealthy investor taking a bigger bite out of LendingClub was Chinese billionaire Chen Tianqiao, who raised his investment group's stake on Wednesday from 18.8% to 20.2%. He initiated an 11.7% position during the springtime of last year, beefing it up along the way. 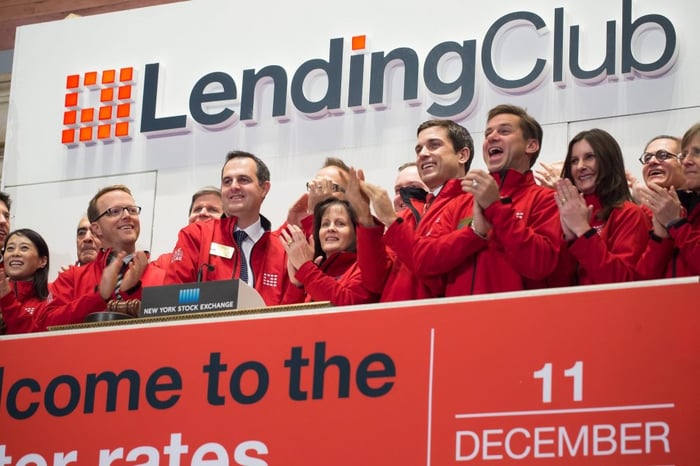 LendingClub has been a disappointment since going public at $15 in late 2014. The stock has fallen 23% so far this year, and that's actually a relative victory for a stock that shed more than half of its value in 2015 before doing so again in 2016.

LendingClub seemed to be dishing out even more bad news earlier this month, when it lowered its guidance for the current quarter, but several Wall Street analysts didn't see it that way. Morgan Stanley's James Faucette put out a note arguing that LendingClub's new expectations for more modest revenue growth and margin are bullish because they're more realistic than earlier targets. LendingClub now sees long-term revenue growth of 15% to 20%. He lowered his price target from $6.50 to $6, but like Maxim's Diana, it's a bullish goal off recent levels. Oppenheimer and Compass Point joined Morgan Stanley in offering similar upbeat takes on Lending Club's investor day presentation two weeks ago.

Diana's encouraging note last week points out that he's sticking to his bullish buy recommendation. He thinks LendingClub should continue to penetrate the unsecured personal-loan market for credit card refinancing. LendingClub's credit algorithms should continue to improve as its platform gets smarter with every passing transaction. Diana thinks it will now be 2019 -- not next year -- that revenue starts to rise substantially on new products and operating efficiencies, but the low stock price is too tempting to ignore.

LendingClub is now far removed from a scandal in early 2016 that cost the company its CEO and a few key executives. Former CEO Renaud Laplanche was let go after it was revealed that the company altered the dates on a group of sold loans for the sake of meeting a loan investor's requirements. The future should get better from here, and last week's rally could be just the beginning of a turnaround that's long overdue.

3 Ways to Invest in the Sharing Economy

Why LendingClub Stock Fell 14% in February