Last week, United Continental (NASDAQ:UAL) announced a big increase to its share repurchase plans. United is set to wrap up a $2 billion buyback program by the end of this quarter, and the board has now authorized an additional $3 billion of share repurchases.

Shortly thereafter, it was JetBlue Airways' (NASDAQ:JBLU) turn to roll out a new, larger buyback program. This is a great move in light of JetBlue's rock-solid balance sheet, strong free cash flow, and cheap stock.

JetBlue is finally returning capital to its shareholders

Share buybacks are nothing new for JetBlue Airways. However, until recently, the company was only repurchasing enough shares to offset the stock it was issuing to employees. JetBlue's diluted share count declined just 0.3% between 2014 and 2016, even though it repurchased some stock in each year.

It's only in the past year or so that JetBlue has truly started to return capital to shareholders. In 2016, the board doubled JetBlue's share buyback authorization to $500 million. This program was scheduled to run through 2019.

Instead, JetBlue bought back $120 million of stock in 2016 and completed the remaining $380 million of share repurchases during the first three quarters of this year. As a result, JetBlue's diluted share count was down 4.5% year over year last quarter.

On December 8, JetBlue's board approved an additional $750 million of buybacks for the 2018-2019 period. That represents about 11% of the company's current market cap.

Recently, I argued that United Continental has been too aggressive with its share repurchases. United's free cash flow has dried up this year, so the company has had to increase its debt load to fund share buybacks. Its balance sheet isn't that healthy, either: United Continental ended the third quarter with $4.3 billion of cash and investments, compared to debt and capital lease obligations totaling nearly $14 billion.

By contrast, while JetBlue's free cash flow has declined this year, it remains solidly in positive territory. JetBlue also has a rock-solid balance sheet. At the end of last quarter, it held $814 million of cash and investments, compared with just $1.3 billion of debt. 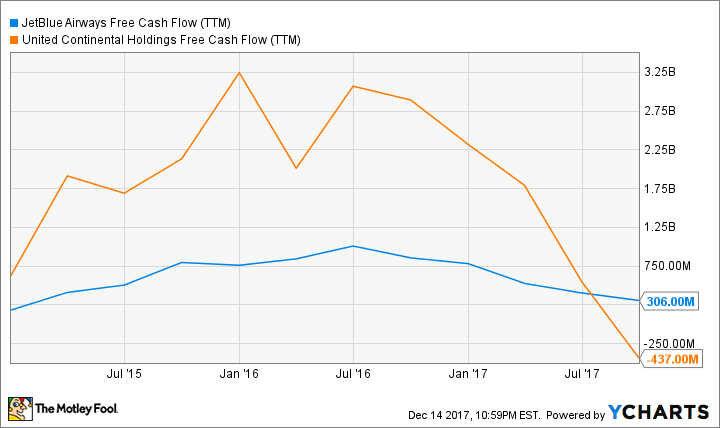 Thus, JetBlue is in a much better position than United Continental to pay for share buybacks. The outlook for the next few years is promising as well. JetBlue is set to reduce its capex for the 2018-2020 period, relative to 2017. Meanwhile, its profitability could rebound quickly as unit revenue returns to growth and JetBlue's structural cost program starts to kick in.

Until recently, JetBlue's management was laser-focused on improving the balance sheet. This focus meant the company couldn't reward shareholders with dividends or buybacks even when the business was churning out strong profits.

Now, JetBlue has finally reached a point where it doesn't need to deleverage any further. It will continue to reinvest a lot of its cash flow in new aircraft to support its high-single-digit growth rate. Nevertheless, there will be plenty of cash left over, which JetBlue can use for share repurchases.

JetBlue will be able to further accelerate its share repurchase activity if tax reform passes. It would be one of the biggest beneficiaries of the proposed tax bill, both from the lower statutory corporate tax rate (21% instead of 35%) and because it would receive additional deductions for the cost of its capital investments over the next five years.

In short, JetBlue's rising buyback activity is one more reason to be excited about the stock's prospects. With JetBlue shares trading for just 12 times the company's projected 2017 (i.e., pre-tax reform) earnings, it's a great time for the company to be repurchasing more stock.