Investors in audio-chip developer Cirrus Logic (CRUS 2.95%) haven't had much reason to celebrate in 2017, with shares down around 13% year to date. Despite results in the most recent quarter that beat top- and bottom-line estimates, concerns about future growth linger, and the company's uninspiring revenue guidance for full-year 2017 hasn't helped matters.

Over the last month, Cirrus CEO Jason Rhode, CFO Thurman Case, and VP of Marketing Carl Alberty presented at a pair of investor conferences, helping shed some light on where the company's business is likely to head over the coming years. Here are my top three takeaways. 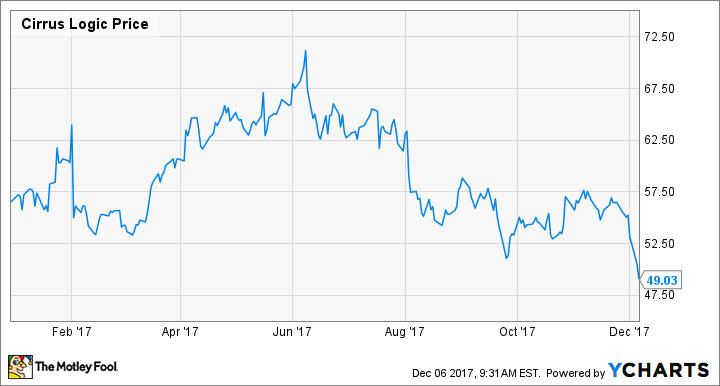 1. There may still be some good growth left in the smartphone market

Cirrus has seen significant growth in its smartphone content over the past several years as handset manufacturers have continued to add premium audio features like noise and echo cancellation, as well as multiple microphones and speakers to improve overall audio quality. That growth was driven primarily by higher-end devices manufactured by the company's two largest customers, Apple and Samsung.

But Cirrus still sees growth opportunities in the handset market with other Android-based phone manufacturers who are now looking to differentiate their lower-priced products from one another. Alberty said:

... [W]e see a ton of traction, I mean the China market in particular is a big opportunity and it's driven by kind of flagship features but at mid-tier price points ... it's just been over the last 12 months or so that we've started rolling out products that are purpose built for midtier devices. So we're seeing a lot of good design activity and a lot of traction kind of pulling features down into the midtier that were once reserved just for the kind flagship cycle. 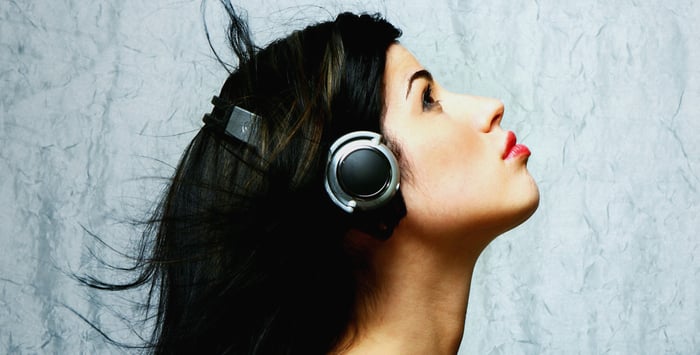 2. An accelerating opportunity in digital headsets

The emergence of USB-C connectivity coupled with the elimination of the headphone jack in the Android market allows new digital headsets to be powered by the phone rather than a separate battery. And that is fueling the addition of premium audio features like noise cancellation, which are right up Cirrus' alley.

While Cirrus has been shipping products for digital headsets and adapters for over a year now, it believes momentum is picking up as more and more manufacturers ditch the headphone jack. Alberty talked about the size of the potential market this opens up for Cirrus:

And so we view it as I guess it's a billion-unit-plus market in terms of that total installed base of analog headsets ... So for us it's about kind of helping transition that billion-unit analog headset market into something where you can have tangible voice and audio quality kind of metrics that are enabled by the digital connection. And so what that requires from our product perspective it is like a portfolio of solutions to address kind of the basic high-performance digital headset function all the way up to and including the continuously adapted [active noise control] solutions, which are obviously more expensive. But really representative of transformative kind of experience for the consumers that was once reserved for a $300 to $400 headphones.

3. The most important thing is to keep innovating

It's apparent that Cirrus isn't getting the benefit of the doubt when it comes to its near-term growth prospects. The company is reliant on Apple for the lion's share of its revenue, and with the most recent iPhone models already unveiled earlier this year, there aren't many obvious catalysts that have the potential to move the needle for Cirrus over the next 12 to 18 months.

However, Case talked about the need to keep investing in research and development regardless of what's happening with its current customers:

For us our number one metric in terms of how we measure the company is operating profit. So, and we've talked about maintaining operating profit in [the] mid-20 range is where we need to be in order for our business model to work because that allows us to generate a profit return value to shareholders, but also continuously invest in R&D ... in terms of making sure that we have enough products in the pipeline and our pipeline is fertile.

The company has several other longer-term initiatives in the works, from a voice biometrics chip that can positively ID a user using their voice to its MEMS microphones business, which it believes it can increase from tens of millions of units annually to upwards of a billion units over time. But these aren't expected to contribute meaningful revenue anytime soon.

Rhode noted that over the longer term, while it may not be clear where future growth will come from, the company has no shortage of options to pursue.

There's a bunch of times in the past where we had a kind of once-in-a-lifetime growth year like we did last year. And a lot of times we got to the end of those, and it's kind of like, "Geez, what's next?" We've never had as many opportunities as we're plugged into now, from broadening out smart codecs into the rest of the flagship accounts in Android, migrating some subset of the content down into the midtiers, capitalizing on amplifiers, the headset transition, ultimately voice biometrics and digital and analog microphones. A number of these vectors are large relative to the size of the company today, and we're just fully oversubscribed in being able to staff ... all the things we want to do.

While it may take time, so long as you believe management can capitalize on these opportunities, the fact that several of them are "large relative to the size of the company" ought to give patient investors reason to stick around.