President Donald Trump gets added to the Magic Kingdom's The Hall of Presidents, and it's a noteworthy event for fans and detractors alike.

Politics and the world's most visited theme park don't often intersect, but that's just what's happening at Walt Disney's (DIS 1.84%) Magic Kingdom with this morning's reopening of The Hall of Presidents. The original attraction is typically down for a few months between presidencies as Disney installs a new sculpted audio-animatronic of the country's new chief executive with a recorded speech, but this refurbishment is clocking in at nearly a year since its mid-January closing.

President Donald Trump's addition to the iconic show is going to be a polarizing event, and while social media is erupting over the move, you're not here to read about politics. Disney investors will want to know if Tuesday morning's reopening will help improve their fortunes -- a pretty important question since the media giant's theme parks business is the only segment that improved in fiscal 2017. 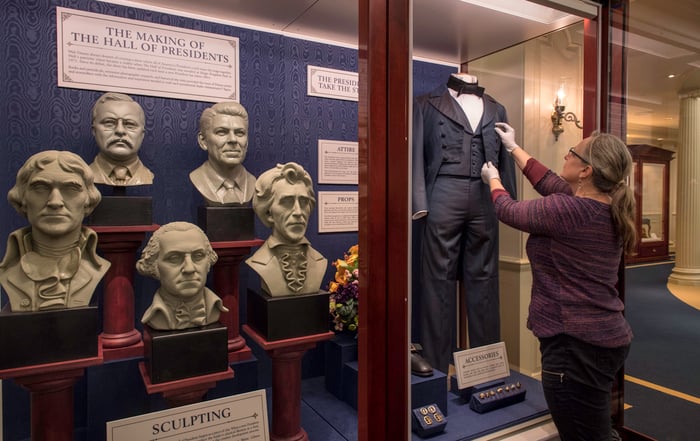 Disney's Magic Kingdom attracted 20.4 million guests last year, according to industry tracker Themed Entertainment Association, millions more than the world's second most visited theme park. Even the smallest addition matters, and something as simple as the reopening of The Hall of Presidents will actually be the park's most significant attraction update in more than three years.

It will be interesting to see how the dynamics play out. Trump's arrival will naturally be magnetic to those that voted for him a year earlier, something that should drum up incremental visits in 2018. The rest of the country won't necessarily stay away from Disney World, as folks can just sidestep the attraction. Trump's segment clocks in at less than 90 seconds of the much larger U.S. history presentation that was also updated.

This isn't a risk-free move for Disney. It won't be just Trump fans checking out The Hall of Presidents, and it's only a matter of time before vocal if not physical confrontations break out between park guests during the presentations. One thing that's fairly clear is that both sides are pretty passionate about our chief executive. Trump's addition makes the Magic Kingdom's new attraction both a magnet and a target, and that will involve ramping up security.

Disney World can use a spark. Attendance has been sluggish for the third consecutive year. The House of Mouse has made up for the ho-hum turnstile clicks by raising ticket prices, something that has kept revenue and operating profits moving in the right direction. Disney's theme park segment saw its top line grow 6% in its latest quarter and 8% for the entire fiscal year. Operating income moved higher. Disney's theme parks matter because its three other segments declined on both ends of the income statement in fiscal 2017.

The Hall of Presidents -- originally set to reopen six months ago -- will drum up near-term interest in visiting the park for many guests. With the struggles continuing at Disney's ESPN and other cable properties it can use the boost at its theme parks along with Star Wars: The Last Jedi to drive growth in fiscal 2018. Disney shareholders may not agree on their opinions about Trump, but they can probably all come together to recognize the significance of attendance-stirring additions.