The food services giant has done a great job with its payouts in the past, but are storm clouds looming?

It takes a huge network of logistical assets to get food to the restaurants, dining facilities, and other food services providers that need it, and Sysco (SYY 1.90%) has made it its business to do so efficiently and effectively. In addition to generating strong profits and attractive long-term returns for its shareholders, Sysco has also established an enviable track record of dividend payouts and growth over its history. Dividend investors like the stock for its above-average yield and consistent business performance.

Yet recently, Sysco has faced increasing competitive threats from its main rival in the business, and the financial health of its customer base of restaurants hasn't been as good as it would prefer. With those pressures, some investors worry that Sysco's dividend might not be entirely safe. Below, we'll look more closely at Sysco to see whether investors can rely on its quarterly payout going forward.

Sysco has a dividend yield that's arguably in the sweet spot: higher than the typical dividend stock, but not so high as to cause concern that it's not sustainable. When you consider that its main rival in the space doesn't pay a dividend, Sysco's yield looks even more attractive by comparison.

Sysco's current yield is actually toward the lower end of its traditional range, which over the past 10 years has been between 2% and 4.5%. But as you'll see in greater detail below, the main culprit here isn't a lack of dividend growth but rather an impressive run in the stock, which has doubled since late 2013. In that light, Sysco is quite shareholder-friendly to dividend investors. 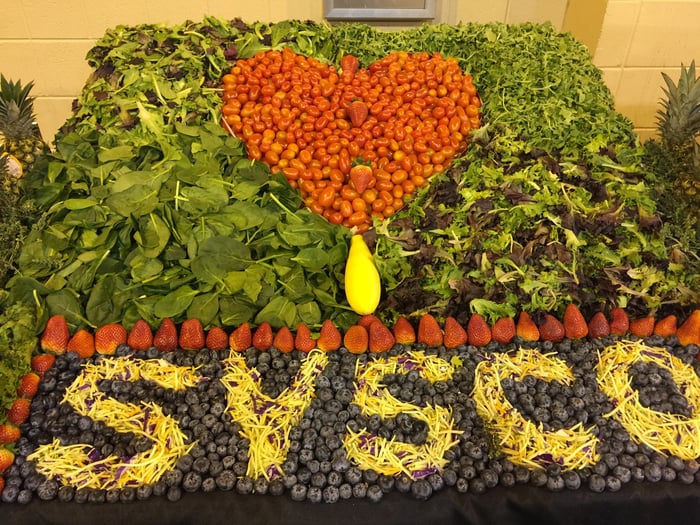 Sysco has a payout ratio of about 60%, which is just a bit on the high side of what dividend investors like to see. For a mature business, however, the payout ratio isn't uncomfortably high, giving it enough capacity to do future dividend increases while also having the flexibility to reinvest capital into its business either through organic growth or via acquisitions.

Its payout ratio has trended upward since the late 2000s, going from a level around 45% up to 65% before shooting higher briefly in 2015. That came as a result of a one-time hit to earnings due to merger expenses. Since then, restructuring charges have played a minor role in depressing Sysco's bottom line and keeping the payout ratio somewhat higher. Long-term growth earnings prospects have the capacity to get the payout ratio back down toward the 50% to 55% range, which would be ideal for the business.

Sysco has a long history of dividend growth. The food services giant has boosted its payout every year for 48 years, including its most recently announced increase of 9%. That qualifies the company as a Dividend Aristocrat, and membership on that prestigious list gives Sysco even more incentive to keep raising its quarterly payments in the future. 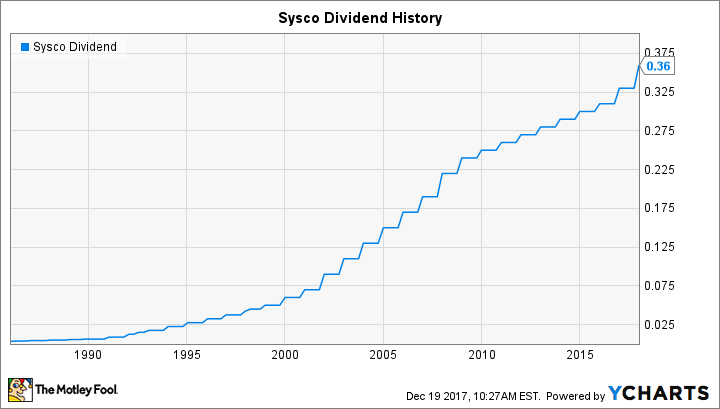 Sysco has been more generous with its dividend increases in recent years, accelerating the pace of its yearly growth. By doing so, it's acknowledging that its dividend has lagged behind its share-price increases. That seems to be motivating the food services company to be more aggressive with its payouts, which could be another good sign for investors.

What's ahead for Sysco?

Sysco has worked hard to grow its business. Having already built up a stranglehold over much of the U.S. market, the company recently bought a large food distribution company in Europe in order to broaden its global scope. The food distribution business is largely fragmented, and that has given Sysco the opportunity to make strategic acquisitions in various areas to expand and keep its biggest competitor at bay.

At the same time, internal cost containment and efforts to promote higher-margin products have also resulted in success for Sysco. Despite having faced recent challenges due to weather-related impacts during the extreme hurricane season in the late summer months, it is seeking to penetrate its existing markets more fully, expand its geographical footprint, and enhance its best practices to make the most of its opportunities.

What to expect from Sysco's dividend

Sysco is in good position to keep boosting its dividend in the coming years. Investors can expect another increase toward the end of 2018 as it takes aim at the 50-year mark for consecutive dividend boosts -- a milestone that reflects the food services company's command of its industry.