The tax code isn't getting any simpler, but new competition could put pressure on the industry.

The tax reform bill making its way through Congress was originally billed as a simplification of the tax code. President Donald Trump said back in February: "We're going to simplify very greatly the tax code. It's too complicated. H&R Block probably won't be too happy."

H&R Block (HRB 3.10%) and Intuit (INTU 1.26%) are two of the biggest players in the tax prep market. H&R Block offers assisted tax prep in thousands of retail tax offices as well as do-it-yourself tax prep online. Intuit, via its TurboTax business, is the king of online tax prep.

The good news for both companies: The tax bill doesn't really make the tax code any simpler. Taxpayers who in previous years shelled out for tax prep services will do it again in the next few months. Demand for these services isn't going away.

What is changing, though, is the competitive landscape. A new competitor that entered the market last year has the potential to shake up the industry. 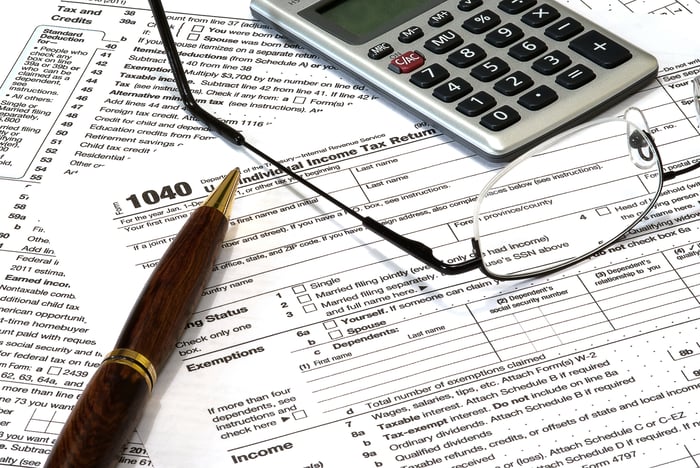 It's hard to beat free

As of June, Credit Karma had around 70 million users for its main credit monitoring service. About 1 million people took advantage of Credit Karma Tax in its inaugural year. That's small potatoes compared to both Intuit and H&R Block. Last tax season, Intuit's TurboTax processed 34.6 million tax returns, while H&R Block did about 7 million through its software and 11.9 million through its retail locations.

But there's little reason to believe that Credit Karma Tax won't grow in popularity, especially with so many Credit Karma users. The industry is ripe for disruption: Intuit's consumer tax segment generated $2.2 billion of revenue and $1.4 billion of operating income in fiscal 2017. That's an eye-popping 63% operating margin.

To be fair, there have been low-cost options available for years. Online tax prep services are sticky. A customer who used TurboTax last year may opt to use it again this year simply because their information is already there. It's the path of least resistance, even if it costs substantially more than the alternatives. Price is not the only factor.

But Credit Karma Tax could put pressure on Intuit's and H&R Block's pricing, particularly because it's offered through a platform with so many users. While tax prep companies must advertise heavily to win customers, Credit Karma can leverage its massive user base. I wouldn't be surprised to see Credit Karma get more aggressive about pushing its tax prep offering now that the first-year kinks have been worked through.

Intuit investors should be more worried than H&R Block investors, given Intuit's valuation. The stock trades for 43 times fiscal 2017 earnings, a multiple that bakes in some serious growth expectations. If Intuit is forced to lower TurboTax prices or get more promotional to retain customers, earnings growth could fall well short of what's needed to justify the stock's price tag.