Few industries have given shareholders returns like those of the healthcare sector over the past few decades. Two companies at the forefront of that tide are Veeva Systems (NYSE:VEEV) and Cerner (NASDAQ:CERN) -- and today they'll be going head-to-head.

Interestingly, I authored an article with the exact same matchup 10 months ago. Back then, I gave the nod to Veeva. Since then, the stocks have tied; both returned 30%, handily beating the broader market. 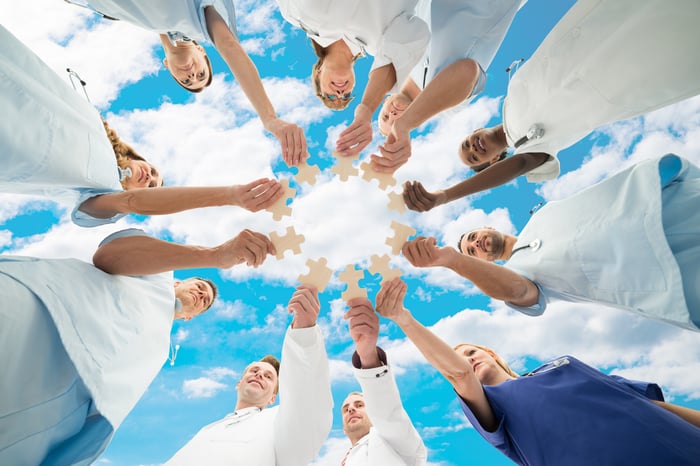 So how do they stack up today? By evaluating the companies on three different criteria, we can get a better idea of what we're paying for when we buy shares and which is the better bet today.

For truly long-term investors -- we're talking a minimum of three years -- there's nothing more important to evaluate than a company's sustainable competitive advantage, often referred to as a "moat." At its core, a moat is what keeps customers coming back for more while holding the competition at bay for decades.

Veeva's key moat is provided by high switching costs. The company got its start providing software-as-a-service (SaaS) for customer relationship management (CRM). But the real coup has come from Veeva Vault, which has several subcategories that help drug companies do everything from capture electronic data from clinical trials to managing regulatory requirements. As more and more companies sign on -- and use more and more Vault applications -- switching costs for those clients soar.

Last quarter, management reported that the number of clients using multiple Vault applications grew 50%, an enormously positive sign for the company's shareholders. Over the next year, keep an eye on two new Vault applications -- Clinical Trial Management Systems (CTMS) and Electronic Data Capture (EDC). The former is an area of need for drug companies that are still relying on clunky legacy systems, and Veeva already has 11 companies signed on. The latter is a more developed market, largely dominated by Oracle and Medidata Solutions. The idea is that as drug companies start to use Veeva Vault for all of their other needs, the decision to use the company for EDC will make more sense.

Additionally, the popularity of Vault has been so high that companies outside of pharmaceuticals have been asking for access to the cloud application. These companies are largely concentrated in highly regulated industries like chemicals, manufacturing, and consumer packaged goods. In response, management released Vault QualityOne, a solution for such companies. Thus far, details from the effort have been scant, with management saying that it wants to focus on success with early adopters now and focus on adding more customers in 2018.

Finally, Veeva also announced an application set to become available in 2019: Vault Safety. This application will allow drug companies to collect data from adverse reactions to medication, handle communication with authorities, and -- most interesting to me -- attempt to use data to signal when more health problems might be on the horizon.

Cerner also uses the SaaS model and enjoys the benefit of high switching costs. The company provides real-time data for doctors and other healthcare professionals and has been around for much longer than Veeva, which only got its start in 2007.

Normally, I would call this a tie, as both have enviable moats. But they seem to be headed in opposite directions. While Veeva has not only added far more customers than expected over the past three years and branched into providing software for companies in other industries, Cerner's bookings have disappointed lately.

And Cerner is certainly not growing its business as quickly as Veeva is right now. Next year's revenue is expected to be in the ballpark of 9%, while Veeva has said that it expects growth of 20% or more every quarter until 2020. Because both of these companies have high switching costs, that means lots more sticky revenue for Veeva.

Ask most investors and they'll tell you that excess cash should be handled in one of two ways: given back to shareholders via buybacks or dividends, or reinvested in growth opportunities. While there's certainly a place for both of those, there's also something to be said for keeping a boring old pile of cash around.

That's because every company, at one point or another, is bound to run into difficult financial times. Those that have cash on hand can actually emerge from these episodes stronger by buying back shares on the cheap, acquiring distressed rivals, or outspending the competition to gain long-term market share.

Keeping in mind that Cerner is valued at almost three times the size of Veeva, here's how they stack up.

Even after factoring in size, Cerner has more cash flow and net income than Veeva. At the same time, Veeva's net cash position outstrips Cerner by a fairly wide margin. But there are a few key aspects to keep in mind: Cerner is a more mature business and many of its applications are at a scale that they can enjoy robust margins. Veeva, on the other hand, has spent the money to roll out new applications (like EDC and CTMS), but has yet to achieve scale with customers.

Furthermore, while some would argue that it makes sense to take on debt as Cerner has in a low-interest rate environment, Veeva's net cash position -- 70% larger than Cerner's -- gives it more flexibility if an economic crisis hit. It would be easier for Veeva to buy back a larger share of stock, acquire rivals, or temporarily lower prices -- driving start-up competition into bankruptcy -- to gain and maintain market share.

Withstand and benefit from recessions. That's why Veeva wins this one as well.

Finally, we have valuation. There's no one metric that lets you know if a stock is cheap or expensive. Instead, I like to look at a number of different metrics to get a more comprehensive perspective. Here are three of my favorites.

Without a doubt, Cerner is the cheaper company at today's prices.

While both companies have enviable moats, Veeva's appears to be growing, while Cerner's is either caught in neutral or shrinking. Combined with Veeva's lack of debt, I'm giving it the upper-hand, even over the demonstrably cheaper Cerner.