Please ensure Javascript is enabled for purposes of website accessibility
Log In Help Join The Motley Fool
Free Article Join Over 1 Million Premium Members And Get More In-Depth Stock Guidance and Research
By Danny Vena - Dec 22, 2017 at 9:45AM

A significant number of award nominations offer a preview of what to expect from Netflix in the coming year. Investors will want to hang on for the ride.

There are many ways to gauge the quality of movies and television programs, including the plethora of awards that are given out every year. The Golden Globe -- bestowed by the members of the Hollywood Foreign Press Association, and the Screen Actors Guild or SAG Awards, are two high-profile examples that are thought to be predictive of potential for other nominations and awards.

Investors in streaming pioneer Netflix, Inc. (NFLX 2.90%) have had a lot to celebrate so far this year. In its third-quarter 2017 earnings release, the company reported that its worldwide subscribers grew to 109.25 million, up 26% compared to the prior-year quarter. Revenue has followed subscribers, increasing 30.3% year over year to $2.98 billion. Earlier this year, the company revealed that international streaming subscribers had surpassed domestic customers for the first time.

If this year's award nominations are any indication, 2018 will be a banner year as well.

Netflix The Crown has been one of the year's biggest winners. Image source: Netflix.

The nominations for this year's SAG awards were released last week, and Netflix scored 19 nods for its original series and two for its films, besting even Time Warner (TWX) division HBO, which received 12. Amazon.com, Inc. (AMZN 3.15%) was shut out of the television category, but received two nominations for its movies. Hulu received two nods for its TV shows. Netflix originals Stranger Things and GLOW were among the most recognized, with four nods each.

Netflix also made headway at this year's Golden Globe nominations, where the company scored nine series nominations, nearly double its total nods from last year, and trailing only HBO. Its competitors in the streaming space, Amazon Prime Video and Hulu, garnered three nominations each.

Netflix originals The Crown, Stranger Things, and Master of None each received two nominations, while GLOW, 13 Reasons Why, and Ozark each earned one. The company was also recognized in the movie category, receiving two nods for Mudbound and one for First They Killed My Father.

This follows a pattern seen earlier this year at the Emmy nominations, where Netflix garnered 91 nominations, second only to HBO and the most of any streaming service. Netflix walked away with 20 statues compared to only 10 for Hulu and two for Amazon.

Why does it even matter?

Being recognized isn't merely about bragging rights, although that certainly comes into play. Exclusive and original content is the biggest factor cited by consumers when choosing a streaming service, according to a Magid Media Futures study.

Analysts from Guggenheim Securities agree. In a note to clients they stated:

We believe that Netflix's continued award nominations growth is correlated to content quality and validates the company's growing investment in original programming. As Netflix continues to increase its content spend (we forecast $11.2 billion cash spend in 2018, up from $9.2 billion in 2017) and expand its production, we see award nominations as a positive indicator of the company's ability to identify, acquire and develop impactful product.

Netflix execs have long believed that quality programming was the key to subscriber growth and retention. Here's how the company explained higher-than-expected customer acquisitions in the second quarter of this year:

We underestimated the popularity of our strong slate of content which led to higher-than-expected acquisition across all major territories. As a result, global net adds totaled a Q2-record 5.2 million (vs. forecast of 3.2 million) and increased 5% sequentially, bucking historical seasonal patterns. 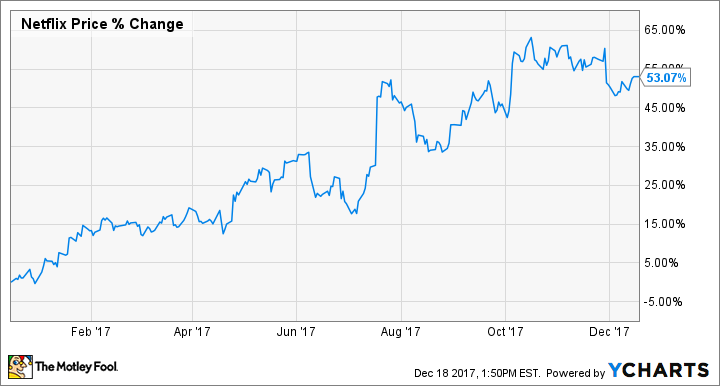 Even if Netflix doesn't take home the most trophies, its consistent performance in terms of nominations shows that the company is winning the battle for quality content. Great programming leads to more subscribers, which increases the budget for programming.

As long as the cycle continues, Netflix investors will continue to reap the rewards. Strong growth in both subscribers and revenue has boosted the stock, which is up over 50% so far this year. With another strong start to awards season, look for the company's solid growth to continue in 2018.