Shares of the propane leader have slid throughout 2017. Is relief on the way in 2018?

Not much has gone right for Ferrellgas Partners, L.P. (FGP) since it slashed its distribution in mid 2016. Shares have dropped from more than $20 apiece at the time of the announcement to under $4 in the waning weeks of 2017. They've established new 52-week lows -- which have doubled as all-time lows -- with regular frequency.

That said, there are signs that the U.S. propane market could be in the early stages of a recovery. Prices are significantly higher today than they were this time last year, temperatures are colder, and Ferrellgas Partners has adopted an aggressive customer acquisition strategy to pull itself out of its misery. Should investors stomach higher-than-average risk to buy the dip? 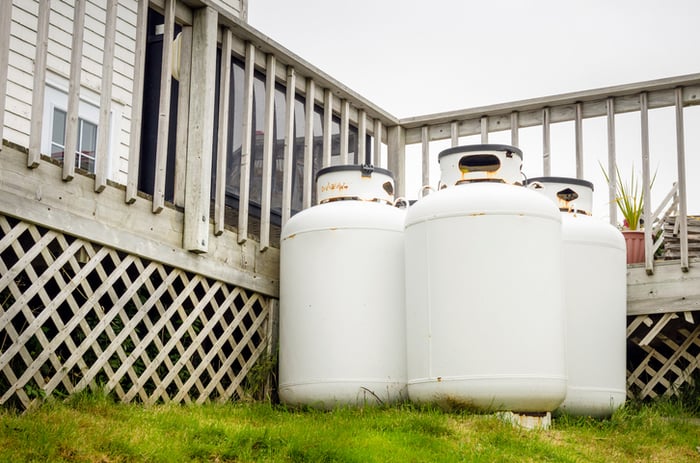 The share price wouldn't indicate it, but Ferrellgas Partners reported promising fiscal first-quarter 2018 financial results in early December. The top line showed significant improvements compared to the year-ago period, although the bottom line was still in the red. Last year's performance was a low point for the company, which means the growth reported below is more a sign of recovery than anything else. However, the fiscal first-quarter period ended on Oct. 31 -- before the cold winter months that are capable of carrying the business.

As the table above illustrates, Ferrellgas Partners is focusing on its residential propane business for the year ahead. Revenue jumped nearly 25% from the year-ago period, although a 50% increase in the cost of that revenue was necessary to deliver the gains. Management is betting that the investment will pay for itself if a strong winter season materializes.

Investors might be encouraged by recent trends in propane prices:

Of course, Ferrellgas Partners cannot control the weather, so it's a little helpless if winter temperatures this year -- or for the foreseeable future -- continue to be warmer than historical averages. That's why management has furiously invested in its Blue Rhino business, which is much less dependent on temperatures because its products are used for recreational activities like grilling, rather than heating homes. It added 2,300 locations during the fiscal first quarter and will continue to invest in the business throughout the year.

While management's moves are encouraging, it's important to remember that the company still finds itself in a precarious position. The future of the business will very much be determined by cash flow, which remains weak. Without ample cash flow, Ferrellgas Partners cannot pay down its debts. Considering it shelled out $40.8 million in interest payments during the fiscal first quarter alone -- the equivalent of $0.40 per share -- investors shouldn't overlook it, especially since reducing debt is a necessary first step to increasing the distribution payments.

There really are positive developments taking place at Ferrellgas Partners, or at least the beginnings of what could become positive developments if the weather cooperates. However, I don't think this is a propane stock worth buying at this point in time. There are still too many unknowns and too much uncertainty surrounding the business and its ability to generate meaningful cash flow. Investors interested in the company should simply keep watching it to see if 2018 marks a turnaround.