Big Blue looks poised for a big bounce in 2018.

Investors in IBM (IBM -0.66%) have seen their holdings lose 21% of their value over the last five years, while the S&P 500 market barometer marched 88% higher. The drop shrinks to 8% for shareholders who reinvested IBM's dividends in more stock along the way, but the S&P 500 more than doubled on those terms. Would this be a good time to invest in Big Blue while the stock looks affordable, or are those share prices down for the count?

I would argue that it's actually one of the best buys on the market here at the end of 2017. Here's why. 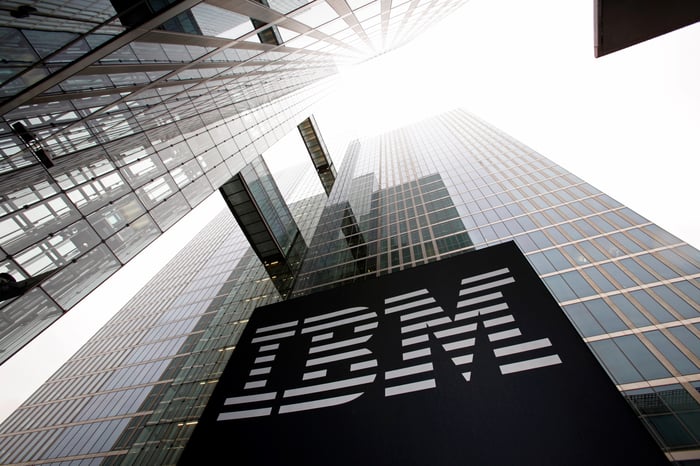 This is the turnaround that never ends, right?

IBM has been pursuing a basket of high-growth operations known as its Strategic Imperatives over that troubled five-year span. CEO Ginny Rometty took predecessor Sam Palmisano's one-stop shop for all your IT needs and started refocusing it on cloud computing, artificial intelligence, mobile computing, and data security. A lot of IBM's enterprise systems and other hardware operations were sold along the way, causing a huge drop in the company's top-line sales.

That plunge is right at the heart of IBM's disappointing stock chart. Many investors want results right now, punishing companies that take a longer view. So here we stand with an invigorated core business, aimed straight at some of the most exciting new markets available and attached to an extremely affordable stock.

IBM's management has officially called 2017 out as the bottom of that long and painful trough. Strategic Imperatives accounted for 45% of IBM's total sales over the last four quarters, up from 40% a year ago and 35% the year before that. It may not be all rainbows and unicorns from here on out, but the general trend in sales, earnings, and cash generation should turn upwards for many years to come.

The turnaround isn't complete by a long shot, but the path to a full recovery is pretty clear.

You could wait for that complete bounce, of course, but wouldn't it be a shame to miss out on a fantastic buy-in opportunity before that? Here's what IBM's stock looks like today compared to longtime frenemy Microsoft for a sense of financial scale:

In short, IBM's stock is priced for absolute disaster -- at a moment in time when the exact opposite story is starting to play out -- oh, and it doesn't hurt that the stock is paying out its highest dividend yields in more than 20 years at these low prices. Smart investors should take this opportunity to stock up on affordable IBM shares while the discount lasts.