"What could possibly go wrong with that?" asks Skynet.

"Swarms of autonomous cruise missiles ... that use collaborative networking" to wreak "havoc on enemy air defenses."

That's how Aviation Week describes the U.S. Air Force's new "Gray Wolf" project, an effort to develop advanced technology that will enable cruise missiles to act in concert, independent of human control, to seek out and destroy targets hundreds of miles distant from their launchers. 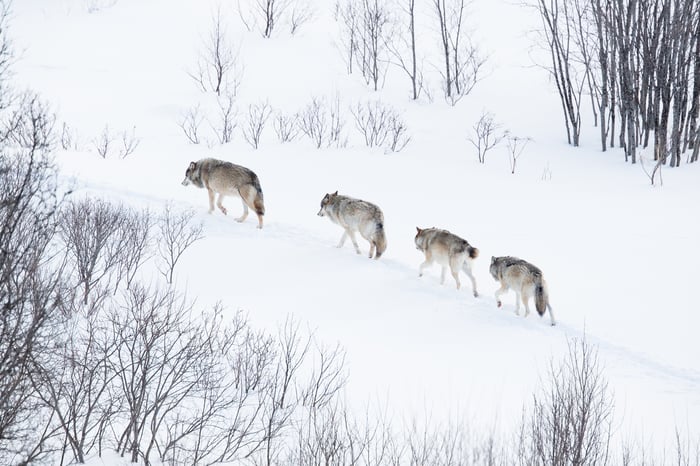 Wolves follow the leader and hunt in packs. New missiles from Northrop and Lockheed Martin might do the same. Image source: Getty Images.

What is Gray Wolf?

Details on the Gray Wolf project are few and hard to come by, with AW describing Gray Wolf as a "secretive project" in general, and one that defense contractors are "reluctant to comment" about "publicly." In the course of describing two new contract awards last week, though, the Pentagon let on that Gray Wolf is only a "science and technology demonstration effort" at this stage. What the Air Force intends to find out is if its designated contractors can design, develop, manufacture and test an "affordable ... networked" cruise missile.

AW adds that the cruise missiles in question will be "long range," "low-cost,""subsonic," and designed for "enhanced navigation, survivability and attack of particular targets."

In all likelihood, the missiles will be designed as air-to-surface munitions, to be deployed from Air Force bombers. Other potential platforms for deploying Gray Wolf might include a yet-to-be-designed "arsenal plane" (also colloquially known as a "bomb truck"), an un-stealthy but heavily armed missile carrier whose sole purpose would be to shoot at targets detected by F-35 fighter jets operating in full stealth mode.

Who will build Gray Wolf?

The Pentagon picked two contractors from a field of seven contenders to work on the Gray Wolf project. Lockheed Martin (LMT 0.83%) and Northrop Grumman (NOC 1.63%) were awarded twin $110 million development contracts last week to try to bring Gray Wolf to life. Lockheed's work will wrap up soonest, by mid-December 2022. Northrop will get to work on Gray Wolf a bit longer -- through December 2024.

So to start off at least, Gray Wolf is looking like a lucrative project for these manufacturers -- but perhaps not for long. One key objective of Gray Wolf, it is becoming apparent, is to develop a pseudo-smart missile with very low unit costs. This would be achieved by delegating the "intelligence" of multiple missiles to other, smarter missiles from which they would take orders.

Rather than building sophisticated (and expensive) guidance systems into each individual weapon, Gray Wolf missiles might instead play "follow the leader" to their target. For example, a Lockheed-designed Joint Air-to-Surface Standoff Missile (JASSM) smart cruise missile, which costs the Air Force about $1 million to buy from Lockheed, could provide the brains of the operation, and multiple cheaper Gray Wolf missiles would simply tag along to their collective target. This suggests that when finalized, Gray Wolf might actually lower the unit cost of munitions procurement for the Air Force -- meaning that defense contractors' profits will depend on building missiles in quantity.

If Gray Wolf lives up to expectations, maybe they'll get that chance.