Please ensure Javascript is enabled for purposes of website accessibility
Log In Help Join The Motley Fool
Free Article Join Over 1 Million Premium Members And Get More In-Depth Stock Guidance and Research
By Rick Munarriz - Dec 24, 2017 at 10:39AM

Tencent and JD.com invest in Vipshop in a deal that's about more than just the raised money.

One of last week's biggest winners was Vipshop Holdings (VIPS 2.93%), soaring 44.7% after Tencent Holdings (TCEHY -0.24%) and JD.com (JD 2.69%) announced that they would be making sizable investments in the online discounter of brand-name apparel. Tencent is paying $604 million for a 7% stake in Vipshop, and JD.com is investing $259 million to grow its stake from 2.5% to 5.5%. Tencent and JD.com are paying a big premium for their stakes, as even Vipshop's 45% surge is still short of the $13.08 per American depositary share price that they're shelling out for their investments.

Vipshop isn't smarting for money, armed with nearly $600 million in cash. This deal is more about validation and getting two of China's dot-com darlings in its corner. Tencent is an internet giant with a knack for taking stakes in rising companies. JD.com is China's largest online retailer by revenue. 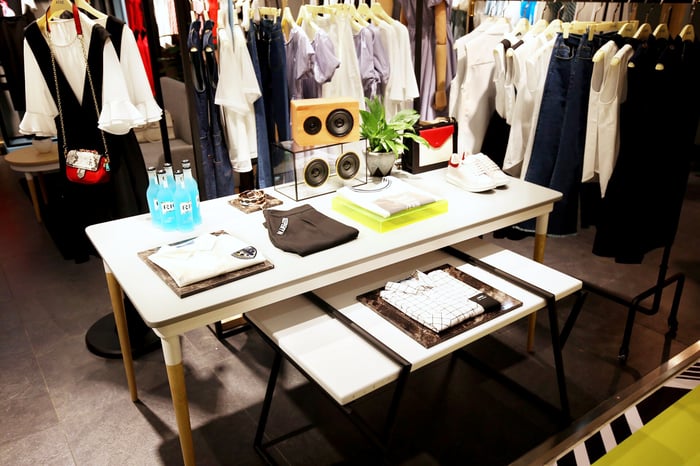 Dealing for cards you play later

The problem Vipshop faced was that it was falling out of favor with investors. The stock was trading sharply lower before last week's pop put its year-to-date return in positive territory, a sharp contrast to Tencent and JD.com, which have soared 116% and 67%, respectively, in 2017.

This former market darling that had seen its shares more than double for three consecutive years through 2014. It would routinely blow through Wall Street forecasts, but it fell short of analyst profit targets in the second quarter and merely met expectations last time out. Vipshop's 28% top-line growth was at the high end of its earlier range, but weak guidance calling for decelerating growth during the current quarter ended with slashed price targets from a pair of analysts.

The business cooperation deals with Tencent and JD.com should help accelerate growth levels. Healthy placement on the popular platforms should help boost its exposure. Vipshop's active customer count should rise above its current 60.5 million shoppers over the past 12 months. Vipshop's flash sales have been magnetic to fashion-savvy deal-seekers in China, and landing Tencent as a new investor and JD.com with its larger position will only help its appeal.

It took Vipshop four months to get its stock back into the double digits, and the strong partnerships should help keep it that way.