Please ensure Javascript is enabled for purposes of website accessibility
Log In Help Join The Motley Fool
Free Article Join Over 1 Million Premium Members And Get More In-Depth Stock Guidance and Research
By Keith Speights - Dec 24, 2017 at 9:08AM

The risks are high for Novavax. But so are the potential rewards.

What goes up can go down -- and often does.

On Dec. 18, Novavax (NVAX 11.12%) stock was up more than 18% year to date. By the end of the following day, the biotech's share price had plunged more than 20%. Novavax stock is now down close to 9% in 2017. What happened? The company provided an update on progress of its RSV F vaccine and NanoFlu influenza vaccine that wasn't what investors expected.

But is Novavax a stock to buy after the recent drop? Let's look at both sides of the argument. 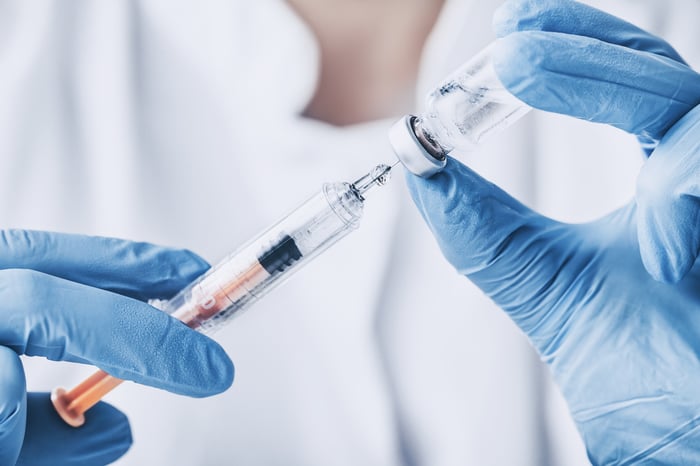 The primary case for buying Novavax begins with the potential for its pipeline candidates. First, the biotech's RSV F vaccine could address an enormous unmet need. RSV, or respiratory syncytial virus, causes more hospitalizations among U.S. children under the age of one than any other factor. It causes more deaths in children in that age group across the world than any other disease except malaria.

Novavax's vaccine uses an antigen based on the RSV fusion (RSV F) protein to vaccinate infants through immunization of pregnant mothers. This approach of maternal immunization of infants could be a really good one, based on results from a phase 2 study. Novavax now has a late-stage study in progress and expects an interim analysis of the data in mid-2018. If all goes well, the biotech should report primary outcome results in early 2019 and file for regulatory approval by the end of 2019.

There's also excitement among Novavax investors over the potential for its nanoparticle-based influenza vaccine, NanoFlu. Pre-clinical results from NanoFlu were so good that Novavax kicked its program into high gear. NanoFlu handily beat Sanofi's leading flu vaccines Fluzone and Fluzone HD in generating antibody responses in ferrets, which are used because flu infections in the animals closely resemble those in humans.

Novavax says that it should have a complete phase 1/2 data package ready in February 2018. That's a little later than initially expected. However, it's still a quick turnaround, considering the phase 1/2 study didn't begin until less than four months ago.

The opportunity for NanoFlu is huge. Around two-thirds of older Americans receive flu vaccinations currently. The Centers for Disease Control and Prevention (CDC) want to increase that rate to 90% by 2020. If NanoFlu is successful in further studies, Novavax could have a big winner on its hands.

The most compelling argument against buying Novavax stock is it's highly risky. As a case in point, the company's RSV F vaccine has already flopped in a late-stage study in immunizing older adults. The vaccine didn't meet its primary endpoints nor its secondary endpoints.

More than one-third of candidates in phase 3 studies for infectious diseases ultimately win regulatory approval, according to a report published by the Biotechnology Innovation Organization (BIO). There's a real possibility that Novavax could fail yet again with its current late-stage study of the RSV F vaccine in maternal immunization of infants.

The odds are much worse for NanoFlu. We're talking about a product that had never been given to a human until September 2017. BIO's report of clinical development success rates between 2006 and 2015 found that fewer than 1-in-5 phase 1 programs in infectious diseases eventually win approval.

Even if NanoFlu beats those odds and is successful, Novavax's previously announced timeline of possibly filing for approval by late 2019 could be way too optimistic. The company's latest announcement of a delay in completing its phase 1/2 package for review with the Food and Drug Administration is a good example of how things can go more slowly than hoped.

It really boils down to whether RSV F and NanoFlu vaccines will be successful. Although the RSV F vaccine didn't pan out in earlier late-stage studies in older adults, there are some factors that could have clouded those results that shouldn't be an issue with maternal immunization of infants. And although Novavax did push back on completion of its phase 1/2 data package for NanoFlu, the company attributed the delay to difficulties in obtaining, growing, and maintaining genetic stability of wild-type flu viruses and not to anything related to the vaccine itself.

Really, though, we don't know for sure if these vaccines will succeed or not. What we do know is that Novavax's market cap right now is only around $360 million. If either the RSV F or the NanoFlu vaccine prove to be effective, the company should be worth much more than it is now. Buying Novavax stock is a roll of the dice, to be sure. I think, however, that the roll is one worth taking. The risk-reward proposition for Novavax appears to be favorable, in my view.