Please ensure Javascript is enabled for purposes of website accessibility
Log In Help Join The Motley Fool
Free Article Join Over 1 Million Premium Members And Get More In-Depth Stock Guidance and Research
By Daniel B. Kline - Updated Dec 27, 2017 at 9:02AM

While some traditional chains are closing brick-and-mortar stores, formerly pure-digital retailers are opening them. What gives?

The internet will kill brick-and-mortar retail. That's a prophecy that has proven at least partly true in 2017 as thousands of chains have closed stores, while others shut down for good, and quite a few remain at risk in 2018.

Retail has become increasingly digital, but most shopping still takes place in stores and digital retailers have discovered that, in many cases, there's a benefit to having a brick-and-mortar presence.

In some cases, that can be simply to facilitate returns. That's why Amazon (AMZN 2.07%) has a deal in place with Kohl's. The chain allows customers to drop off items they want sent back to the digital retailer.

Amazon has also shown through its purchase of Whole Foods that having a physical presence can help expedite delivery. The roughly 400 grocery stores add to the digital leader's warehouse network, giving it more points to stage orders from.

Most digital retailers, however, have much smaller ambitions. For companies specializing in a more narrow range of products, opening brick-and-mortar locations may make sense simply for the data it can gain from in-person customer interactions. 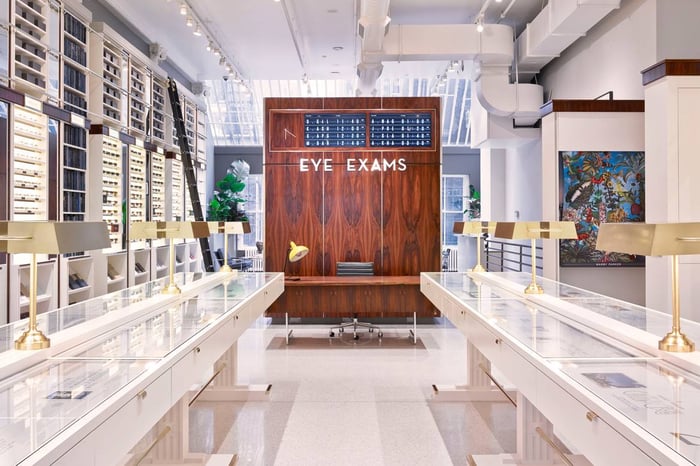 What is "brick mining?"

While it's not yet a mainstream term, "brick mining" is the idea that an online retailer can learn about its customers from having a limited amount of physical stores. The term was used by sportswear subscription retailer Fabletic's retail vice president, Ron Harries, to explain why his once pure-digital employer has begun opening stores.

"When you take the data that you collect from that customer in a retail location, you can get to know your members and guests much differently than you could online only," he told Marketplace.

There's a practical reason for customers to visit a physical Fabletics location that should help the company's digital sales going forward. When a customer finds the right fit -- something it's not easy to do online -- she can then order again (online) without needing to try items on. Physical locations also act as advertising and Harries told Marketplace that Fabletics has seen an increase in online shopping from people located near the stores.

Fabletics is not alone. Amazon has been opening bookstores to show off not just books, but also its Echo and Kindle product lines. It has also opened a stand-alone location for its Zappos shoe line.

In addition, Warby Parker, once an online-only brand, has launched a small network of shops. Bonobos, another formerly pure-digital play, has opened physical stores that it calls "Guideshops." These locations work a lot like the Fabletics stores, allowing the Wal-Mart-owned chain to help its menswear customers with fit while also gathering data on them.

It's hard to know the balance

This is sort of unknown territory for digital retailers, where they will each have to explore the cost versus the benefit of having physical locations.

It's important to note that these stores are generally on the small side. Some have limited inventory for sale, but many serve as extensions of the digital ordering process. Consumers may not leave the store with their purchase, but they leave knowing it will fit or work for them when it arrives.

In exchange, the company gets added data it may not have been able to obtain in a digital sale. That gives it a stronger connection with its customer and knowledge it can extrapolate across other users who fit the same profile.