Find out whether the e-commerce giant will start rewarding its shareholders with income.

Amazon.com (AMZN -2.78%) has been one of the best performing stocks of the internet age. After seeing its stock collapse along with most of its peers in the early 2000s when the internet boom briefly turned bust, Amazon set out to broaden its initial scope, going beyond the book market to encompass all things e-retail. At the same time, the company also went in new directions with initiatives that eventually led to the cloud-computing pioneer Amazon Web Services and a host of other business ideas.

Amazon's returns have been impressive, but the company has still left income investors in the lurch, because the tech giant has never paid dividends. With other technology companies having fully embraced dividends, some investors think it's time for Amazon to join the crowd. But will 2018 be the right time for the e-commerce company? Let's look more closely at Amazon to see where its business stands and whether a dividend makes sense right now.

The case for Amazon to pay a dividend

Startups almost never pay dividends, and that's particularly true in the technology industry. With well-established giants in the industry, new companies have to raise as much capital as they possibly can in order to build momentum and take advantage of all the growth opportunities they have in their respective niches. With the cost of capital generally pretty high for start-ups, paying money back to shareholders as dividends would be silly and counterproductive.

Yet Amazon is in a far different situation than a start-up. The company has become a cash-generating machine, and its growth in that area has accelerated in recent years. Cash from operations has climbed from $6.84 billion in 2014 to $16.44 billion in 2016. Amazon is also on pace to match that figure in 2017. Net income, meanwhile, has also improved, and Amazon is now consistently profitable after years of being largely ambivalent to its bottom-line performance. 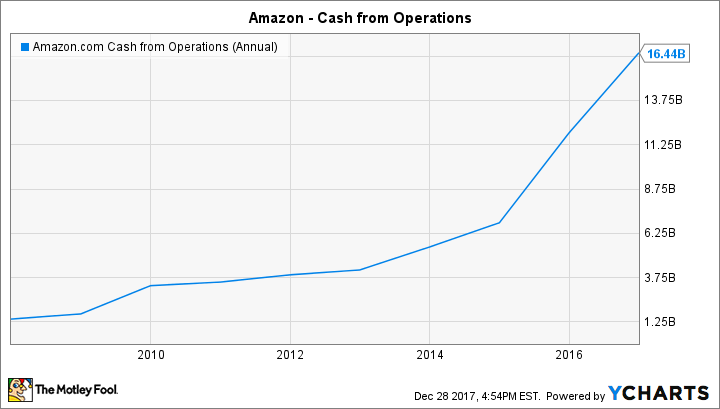 How Amazon uses its cash

The natural response to those calling for an Amazon dividend is that the e-commerce giant has had no shortage of productive ways to use the cash it generates. Throughout the past several years, Amazon has worked to improve the health of its balance sheet, paying off more than $4 billion in long-term debt in both 2015 and 2016.

Finally, the highest-profile purchase that Amazon made was its $13.7 billion purchase of Whole Foods Market. The move signaled Amazon's intent to look for ways to merge the brick-and-mortar and e-commerce worlds, with analysts speculating that Amazon could use Whole Foods Market's store locations and distribution network to create synergies with faster delivery options within the grocery space and in other areas. Yet rather than using the cash it had available, Amazon instead turned to the debt market, selling bonds in private offerings rather than tapping into its $24 billion in cash and short-term investments.

The best argument against Amazon paying a dividend is that doing anything meaningful would be far too costly for the company. With a share price of nearly $1,200, even getting a 1% yield would take $12 per share in dividends annually. That works out to almost $5.8 billion. CEO Jeff Bezos isn't one to do anything halfway, and so if Amazon can't pay a significant dividend, it's unlikely to pay one at all. Income investors will almost certainly have to wait beyond 2018 before Amazon will reward them for their patience with a cash dividend.