Please ensure Javascript is enabled for purposes of website accessibility
Log In Help Join The Motley Fool
Free Article Join Over 1 Million Premium Members And Get More In-Depth Stock Guidance and Research
By Dan Caplinger - Dec 28, 2017 at 9:43AM

After nearly two decades, the high-flying home-improvement retailer hasn't made this key move. Is the wait almost over?

Home Depot (HD 2.75%) has been one of the big winners from the rebound in housing since the late 2000s. As the giant in the home-improvement retail industry, Home Depot has seen its share price rise precipitously as it has turned its business beyond do-it-yourself homeowners to capture the market potential of professional contractors and craftspeople. Along the way, the company has reached the top five in terms of influence within the Dow Jones Industrial Average (^DJI 2.68%).

Yet one thing that Home Depot hasn't done a good job of recently is rewarding its shareholders through stock splits. During the 1980s and 1990s, investors routinely enjoyed the positive-sentiment bump that splits tend to give stocks, but it's now been 18 years since Home Depot last made such a move. Now that the stock price is approaching the $200 mark, some think that 2018 might finally bring a stock split. Below, we'll take a closer look at Home Depot and whether a split is likely. 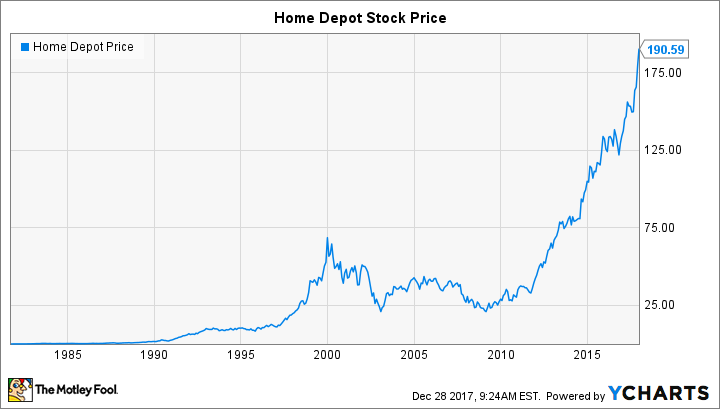 Home Depot split its stock more than a dozen times in an 18-year period starting in the early 1980s. The following chart gives you the details.

Home Depot is relatively unusual among blue chip stocks in the way that it has handled stock splits in the past. Most Dow components have tended to use two-for-one stock splits almost exclusively, and they've historically tended to use the $100-per-share mark as a guideline for when to consider a split. That's consistent with what the general practice among companies more broadly was at the time, with the goal of keeping share prices from climbing into triple digits and making it more difficult for individual investors to be able to afford to buy shares in 100-share round lots.

Instead, Home Depot typically chose less dramatic split ratios, and it's unclear whether share-price management was truly a primary consideration. Early on, some splits came with the stock price below $20 per share. As time went by, Home Depot seemed to get more comfortable letting its shares run higher before doing a split, but only late in its history did the stock reach triple-digit levels before making the move.

Home Depot stock has been well above $100 for nearly three years now, yet the company hasn't followed its old road map to split its stock. In part, that's because the need for round-lot trading has disappeared with the rise of discount brokers and small investors, and splits have become rarer than they were 20 years ago.

Moreover, many of Home Depot's colleagues within the Dow have let their share prices rise to even greater heights. The top-priced Dow component is flirting with $300 per share, and it has almost 60% more influence on the average than Home Depot does. As one of only two pure-play retailers in the Dow, Home Depot's 5% weighting seems representative of its industry even if it's above average for Dow stocks in general.

Finally, Home Depot has indicated explicitly that it favors other moves like stock repurchases over meaningless actions like stock splits. Back in early 2015, CEO Craig Menear told shareholders that he "wouldn't look for us to split the stock."

It's possible that 2017's huge gains could change Home Depot's mind on that score, but it doesn't seem likely. Shareholders should instead be content with the better-than-40% return that the home-improvement giant has delivered in 2017 and hope for similar gains in the years to come.