Home Depot (HD -0.20%) can't seem to get enough of its own stock. Executives a year ago set a target for $5 billion worth of share repurchases, but ended up spending $7 billion after changing their minds late in fiscal 2016.

A similar story is playing out this year. The home improvement retailer had told investors to expect $5 billion in share buybacks this year. Yet it just hiked that forecast in conjunction with its third-quarter earnings announcement in mid-November. Home Depot is now planning to spend $8 billion on its stock this year, including more than $2 billion in the fourth quarter. All else being equal, share buybacks raise earnings per share as there are fewer shares to split the earnings among, but investors always have to look at what's behind the company's decision to spend the money this way. 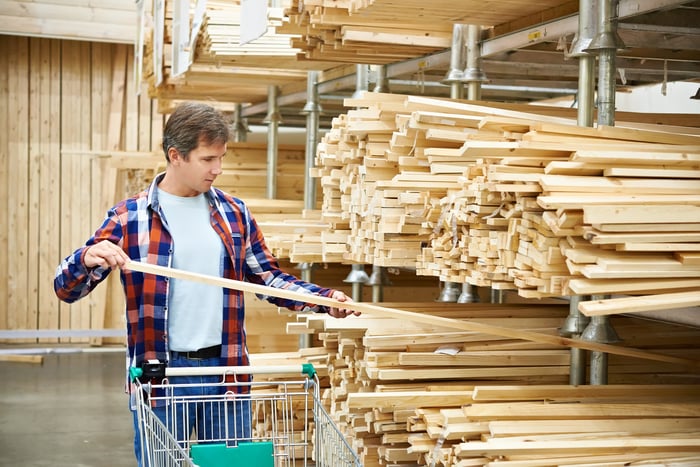 Surprisingly strong operating growth is helping fund Home Depot's extra share buybacks. Home Depot recently raised its 2017 earnings target after comparable-store sales shot up 7.9%, accelerating from a gain of 6.3% in the prior quarter. Hurricanes and other natural disasters lifted demand for home repair and renovation materials in the U.S. and Mexico, and the market leader is benefiting disproportionately from that increase -- especially when it comes to profits.

Operating income through the first nine months of the year clocked in at $11.5 billion, up 9.4% over the prior-year period. Thanks to slow expense growth, Home Depot's net income has improved by double-digit percentages, rising 10.3% to $6.85 billion. Meanwhile, the declining share count resulting from the aforementioned stock repurchases has contributed to a 15% increase in earnings per share so far this year, compared to the 10.5% boost that management initially targeted for 2017. 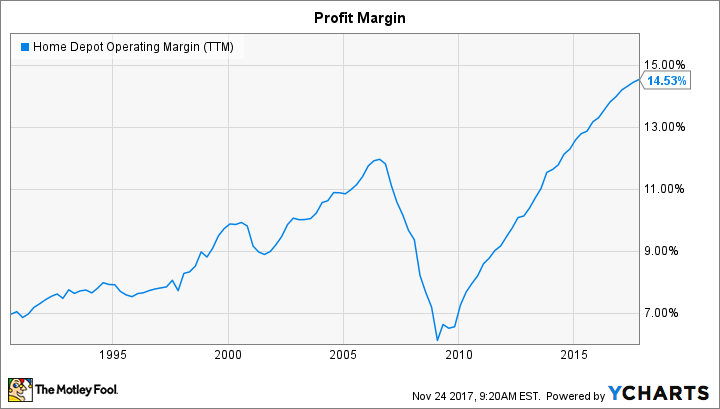 At the same time, Home Depot's steady selling footprint means the company has modest spending needs that are confined mostly to upgrading its shipping infrastructure and building out its e-commerce sales channel. Management hasn't been afraid to tap the debt markets while interest rates sit near historic lows, either. As a result, the company has plenty of funds available both to hike its dividend commitment and return billions to shareholders through stock buybacks.

Further, Home Depot is gaining confidence that the housing market expansion will continue, despite some experts' concerns that a  slowdown is imminent. The age of housing stock in the U.S. is elevated, the rate of new household formation has been below average for years, and home prices -- while they've shot up since 2010 -- still haven't fully recovered to their 2007 peak on an inflation-adjusted basis. All these metrics, plus the broad-based demand growth Home Depot is witnessing in its stores and online, suggest the country is not approaching another housing pullback.

In the short term, Home Depot is expecting efforts to recover and rebuild in the wake of this fall's hurricanes will lift its results for the rest of 2017 and into the first half of 2018. That's why management now forecasts that earnings will rise by 14% this year. Comps are projected to improve by 6.5% -- a healthy acceleration from last year's 5.6% uptick.

The company's increased appetite for stock repurchases likely has more to do with its optimistic long-term forecast, though. Executives believe economic growth should help the housing market keep expanding for several more years. "As we think about housing broadly and fears of slowdown," management told investors in a recent conference call, "we don't see that for 2018, 2019 and 2020."

With help from a steadily improving industry, a few more years of Home Depot's setting new market share and profitability records could keep the stock generating good returns for investors, and for a management team that's demonstrated a knack for efficient capital allocation.