In spite of the pop culture event of the moment raking in hundreds of millions of box office dollars in a short span of time, some are still calling Star Wars: The Last Jedi a flop. The movie gets only a 51% positive audience rating on movie site Rotten Tomatoes, and while there are glowing audience reviews there -- and a 91% rating from critics -- there are also plenty of detractors.

Should the sour mood from some cause Disney (NYSE:DIS) investors to worry?

At the time of this writing, The Last Jedi has been in theaters for just shy of two weeks. Total domestic box office receipts total just under $396 million, and international box office receipts total $420 million. The movie's opening weekend was the second-largest in history with $220 million domestically, just behind its predecessor, The Force Awakens ($247 million opening weekend).

So why all the hoopla over this movie? For one, the franchise's future has been called into question by tepid fan reviews. 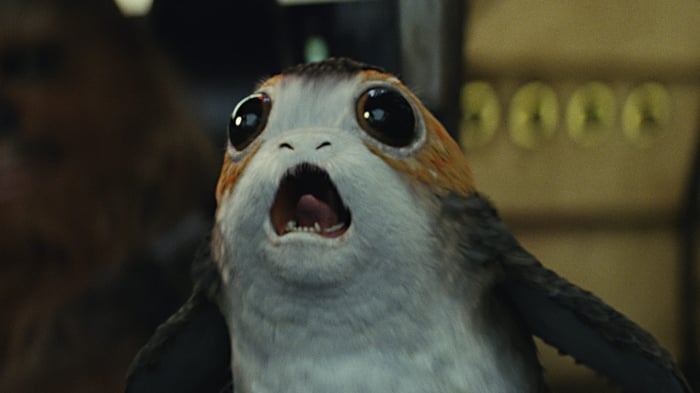 Perhaps that audience response is in part to blame for the second-week performance at the box office. For a franchise that has been setting records for no less than four decades, this one isn't a good one. After its monster opening weekend of $220 million, the next 10 days of sales have not even totaled those of the opening three. It's one of the worst second-week blockbuster performances ever.

Some are worried about how The Last Jedi's performance will affect Disney, but I don't think there's reason for concern. Whether the sales drop in week two is from audience reviews, the timing of the Christmas holiday, or something else, the movie is an instant financial success. Plus, it won't even debut in the world's second-largest box office market, China, until Jan. 5.

Disney has other Death Stars

Ill will of some moviegoers aside, the movie is an instant financial success. We don't know what The Last Jedi's budget is, but The Force Awakens' budget was $245 million. If the sequel is somewhere along those lines, everything from here on out is gravy.

Let's suppose for a moment, though, that The Last Jedi is a financial disaster. That doesn't mean Disney's entertainment empire is finished; the company has other super-weapons at its disposal. Another Star Wars movie is due out in May 2018, called Solo: A Star Wars Story. There are several other titles in the works that will be released in the years to come. Plus, $1 billion is being spent in 2018 to build Star Wars-themed sections at Disney theme parks.

Then there are the other entertainment franchises. Disney's Marvel super-hero universe has been a big driver for the studio, with each movie release averaging over $840 million at the box office. Thor: Ragnarok was the big hit in November, raking in $846 million worldwide and will be included in upcoming quarterly results. Three more Marvel movies will be released in 2018: Black Panther, the next Avengers movie, Infinity War, and Ant-Man and the Wasp.

Disney's Pixar has had similar success, with the average animated feature bringing in $665 million. Coco is in theaters now, having made $500 million so far, and The Incredibles 2 releases this summer.

Besides the big screen, Disney has other irons in the fire, like a stand-alone streaming service for its ESPN network due in early 2018 and a streaming service to rival Netflix in 2019. And all of the aforementioned items feed into the company's theme parks and merchandise revenue from clothes, toys, and games.

Worry over The Last Jedi will likely become a moot point considering the film's status as one of the biggest blockbusters ever. However, even if the disappointment is real and ticket sales fall flat in the months ahead, Disney owners have no need to fear. The leader in the world of entertainment will be just fine.