Users of Apple's mobile devices have a wide array of apps to choose from, while Mac owners have been feeling neglected. Apple may have a solution in store, and it could provide a clue to the company's future plans.

One of the ways that Apple Inc. (AAPL 1.62%) revolutionized the smartphone was with the vast array of applications that customers could purchase at the company's App Store. The ability to customize the experience and capabilities of the iPhone was central to the rapid adoption of the technology.

Apple had similar success using the strategy for its iPad, but the approach fell flat when extended to the company's laptop and desktop computers. While Apple sold over 46 million iPhones and 10 million iPads in its just completed 2017 fourth quarter, the 5 million total Macs provided a much less appealing market to developers, with far fewer prospective customers.

That will soon change if the iPhone maker has its way. 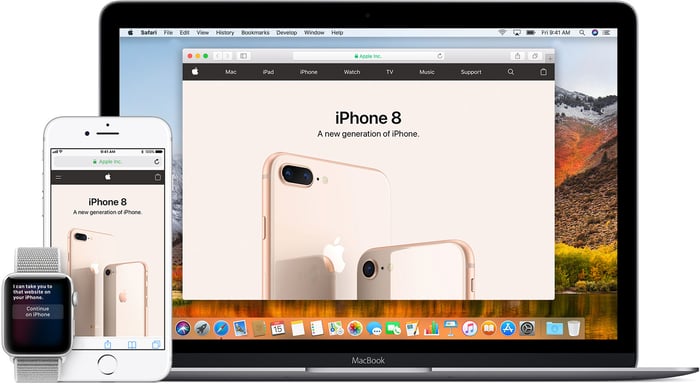 Apple may have a plan that will appeal to Mac owners and investors alike. Image source: Apple.

An operating system to rule them all

Currently, developers have to create two separate apps, one for the iOS operating system that runs Apple's mobile devices, and one for the macOS that handles the company's desktop and laptop computers. The large number of customers with Apple mobile devices provides a much larger pool of potential buyers for the apps. Developers have little incentive to create apps for the much smaller Mac user base, and even less reason to keep the existing apps updated.

Apple is currently working to create universal apps that can run on both operations systems, according to a report in Bloomberg. If the company is successful, developers will be able to design one app that would work across the entire ecosystem of Apple's products, whether the device uses a mouse, track pad, or touchscreen.

This would almost certainly provide the company with a much larger market for its apps, as Mac owners have long bemoaned the lack of applications designed for their devices. Those that do exist typically see long cycles before they're updated, if at all.

Can I be of service?

Apple has been increasingly focused on the growth potential of its services division, which has become one of the company's fastest-growing businesses. The segment, which includes the App Store, Apple Music, iCloud, and Apple Pay, produced revenue of $30 billion during the last four quarters, up 23% over the prior year.

A move to unify the app development process could result in greater continuing revenue from the App Store, and recent developments seem to point to a broader move in expanding services beyond its current tertiary level.

Earlier this year, Apple CEO Tim Cook said the company's goal was to double the size of the services segment within four years, and its growth so far this year seems to put that goal well within range. In the four quarters prior to that revelation, the company had generated $25 billion -- which points to future ambitions for $50 billion annually from services.

Apple recently confirmed its intent to acquire streaming music company Shazam. The company could provide the iPhone maker with improved recommendations as it seeks to increase the appeal of its Apple Music service to subscribers.

Earlier this year, Apple hired two former Sony executives to lead the company's push into video programming. This followed reports that Apple plans to spend $1 billion to create original content in 2018. This led some to speculate that Apple may be interested in creating its own streaming service. The company has already been testing the waters with several programs it made available exclusively to Apple Music subscribers.

Apple hasn't yet commented on future plans for its operating system, and even if they are in the planning phase, they may never come to fruition. Alone it's but one data point, but taken with the other available evidence and Tim Cook's own words, Apple has big plans for expanding its services business and the revenue it produces.