Shopify (NYSE:SHOP) gives investors the option to benefit from the sharp rise in online sales without having to buy Amazon (NASDAQ:AMZN) stock at over $1,000 per share.

The Ottawa, Canada-based e-commerce company started off as a place to sell snowboard equipment directly to consumers, but its founders soon discovered an alternate, more lucrative path. Now the company helps businesses set up their own online platforms to sell goods and services.

"The first Shopify store was our own," the company writes on its website. "It's been our mission to make commerce better for everyone ever since."

They seem to have chosen the right path.

Shopify has seen its stock shoot up over 137% in 2017. But at just over $100 per share, the stock still has room to run when you consider its market. 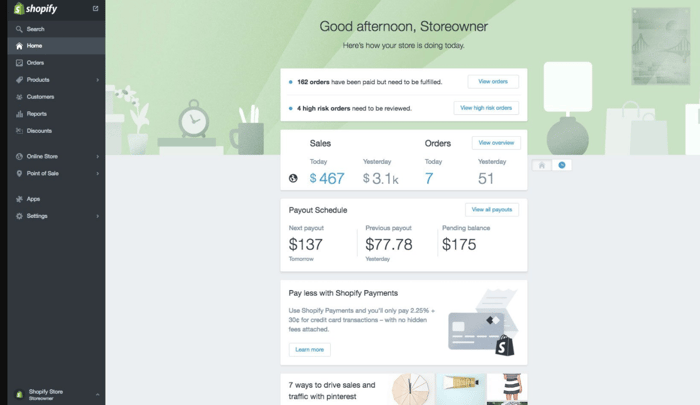 Shopify is a good example of the right company starting at the right time, as we've watched it ride the ever-growing e-commerce wave.

The company started in 2006 with just five people. Now, just over ten years later, it has over 2,000 employees spread out across five offices in North America.

More importantly, there are 500,000 Shopify stores, or merchants, in 175 countries that have generated a combined $46 billion in sales, according to the company's website. Their merchants include individual freelancers as well as larger businesses, like The New York Times (NYSE:NYT).

That may be a lot of clients, but the market potential is nearly limitless. The National Retail Federation estimates that 2017 online sales will increase 8% to 12% over 2016 vs. brick-and-mortar sales, which should increase just 3.7% to 4.2% this year.

So while 500,000 clients and a 137% price increase in shares might make it seem like Shopify is peaking, it's probably not.

In August that company announced that since 2012 the number of Shopify merchants has grown annually at an average rate of 74%. If that's an indication of future growth, Shopify could double its number of clients in about 16 months to hit one million.

That may be overly optimistic, but even half that growth would be impressive. 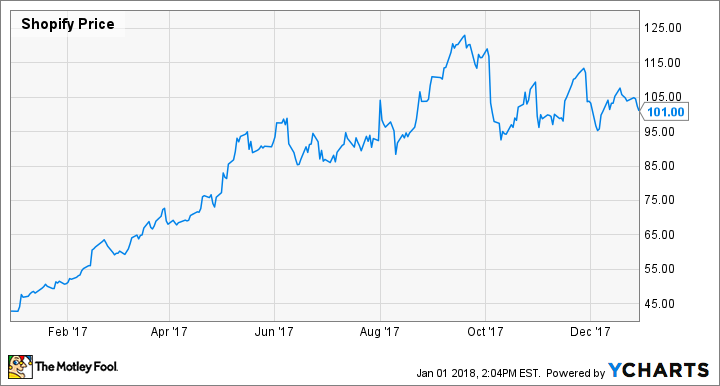 Shopify's revenue growth is the cherry on top

Shopify is on solid ground heading into 2018.

For the latest quarter ended September 30, Shopify's revenue increased 72% year-over-year to $171.5 million. The company attributed the dramatic increase to the record number of merchants that joined the platform in the third quarter, helping raise merchant solutions revenue by 79% year-over-year to $89 million.

"In today's fast-changing retail environment, merchants large and small are hungry to leverage all that technology can do for them," Russ Jones, Shopify CFO, said in a statement. "This is why our platform is so valuable to merchants and why they keep coming to Shopify."

Shopify also reported $5 million in positive adjusted net income this past quarter, a goal the company thought it wouldn't hit until the fourth quarter. If Shopify continues to grow its merchant number and its revenue from merchants, 2018 is going to be a good year for the company.

But what about short sellers' complaints?

Shopify is doing so well that it's attracting some unwanted attention.

Shares of Shopify reacted negatively to one piece of news this year: a report from short-seller Citron Research that criticizes Shopify's business model. Citron managing editor Andrew Left called the company out in a video posted online in October. He called Shopify a "completely illegal get-rich-quick scheme with a good software platform."

Left believes Shopify is overpromising its customers by saying that if they create their own business platforms with Shopify they can make millions.

Shopify founder and CEO Tobias Lütke addressed the claims in the earnings call by saying, "For those who don't know, during this quarter, we were targeted by a short-selling troll who made all sorts of preposterous claims."

He then went on to say that the company does not guarantee merchant success, as it is aware of how hard entrepreneurship is, and that the company has always complied with FTC rules. He also pointed out that the majority of the company's revenue comes from merchants selling goods on Shopify, so it has a vested interest in helping them succeed.

In my opinion, the short seller's report is the opinion of one person, and he has a right to share it and warn others as he sees fit. But so far there is no evidence that Shopify has misrepresented its promises to merchants. Shopify is not to blame if a business built on its platform doesn't work -- that's just business. Shopify's job is to give businesses their best chance to succeed.

Of course, I would like Shopify to be more transparent about churn at the company. The most information we got this past quarter was from Lütke, who said that while "some" entrepreneurs fail, "hundreds of thousands" are thriving.

And Lütke has a point: If most of its merchants weren't doing well, then its revenue wouldn't have grown 72% this past quarter.

There's no reason 2018 can't be the best year yet for the 12-year-old company. Shopify just announced a record 500,000 merchants in August, and that number should continue to grow into the new year and many years after that.

While Shopify will probably not be able to grow merchants at an annual average rate of 74% forever, it can still work on moving current merchants up to higher-priced plans.

Unless 2018 is the year that brick-and-mortar shopping suddenly becomes more convenient and cheaper than online shopping, I think Shopify is in for its best year ever.