Amazon.com (NASDAQ:AMZN) stock continued its winning ways in 2017, jumping 56% during the year, breezing by the S&P 500's 21.8% return, and beating the returns of its fellow FANG stocks, Facebook, Netflix, and Google parent Alphabet.

Moreover, shares have soared 282% over the three-year period through Jan. 2, dwarfing the broader market's 39.4% return, as well as the returns of the other FANG stocks except for Netflix, which slightly edged it out.

This mammoth company -- its $571 billion market cap makes its stock the fourth largest on the S&P 500 index -- continues to grow and churn out stock gains like a smaller growth stock. And there's good reason to believe that the party will continue.

Here are 10 reasons to buy Amazon stock and hold on for the long ride.

CEO Jeff Bezos founded Amazon in 1994, so he knows the company intimately. A founder-CEO is likely to care more about how it performs than even one of the best non-founder CEOs ever could. In fact, a growing number of studies show that founder-led companies tend to outperform in the stock market.

2. Founder-CEO has a lot of skin in the game

Bezos owned 78.89 million Amazon shares, giving him a 10.1% stake in the company, as of Nov. 14. His stake is worth $93.3 billion based on the stock's closing price on Jan. 2. So, when you invest in Amazon, you know its CEO's interest is aligned with your interests.

3. It has an "obsessive customer focus"

Amazon's mission statement begins as follows: "Our vision is to be Earth's most customer-centric company ..." Bezos expounded on this mission in the company's 2016 shareholder letter:

There are many ways to center a business. ... But in my view, obsessive customer focus is by far the most protective of Day 1 vitality.

Why? There are many advantages to a customer-centric approach, but here's the big one: customers are always beautifully, wonderfully dissatisfied, even when they report being happy and business is great. Even when they don't yet know it, customers want something better, and your desire to delight customers will drive you to invent on their behalf.

Amazon's focus on delighting its customers should keep current customers coming back for more and continue to help it attract new customers. 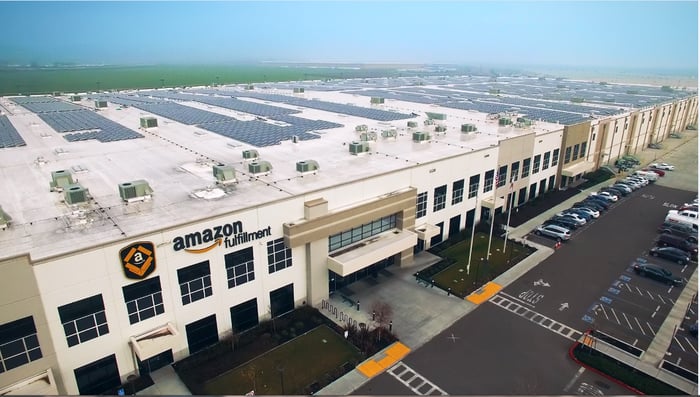 Amazon has several key advantages that help keep competitors at bay (more on those below in No. 6). However, its deepest moat is surely its extensive fulfillment center network, which it's long been pouring money into building out. This network is the key to Amazon's ability to deliver orders in a speedy and cost-effective manner.

Amazon currently has 119 fulfillment centers in the U.S., with plans for 28 more, according to logistics consultant MWPVL International. These are massive multimillion-dollar facilities, averaging nearly 800,000 sq. ft. -- more than 13 times the size of a professional football field! It would be cost-prohibitive for a competitor to come close to matching Amazon's distribution network's geographic footprint, at least in any timely way.

5. Its business model is built to power growth

Amazon Web Services, the company's cloud-computing services business, is its cash-flow machine. Amazon uses much of its enormous cash flow to expand its e-commerce infrastructure and also to branch out into new areas.

6. Its business model is "sticky"

Amazon's business model is "sticky," which means that it helps the company build tight relationships with its customers that make them resistant to jumping ship for competitors. Its super-successful Amazon Prime membership -- which for $99 gets its e-commerce customers free two-day shipping and other benefits -- is akin to a superglue. Statista estimates that the number of Prime subscribers ballooned from 25 million at the end of 2013 to about 90 million in September 2017.

Its website has features that help it become increasingly more convenient the longer a person has been a customer: Past orders are saved, which makes reordering the same or similar items a snap; the site does a good job making recommendations based on previous orders; and so on.

7. The U.S. online shopping trend still has much room for growth

E-commerce sales as a percentage of total U.S. retail sales have been growing at a rapid clip, more than doubling in just over seven years to 9.1% in the third quarter of 2017. 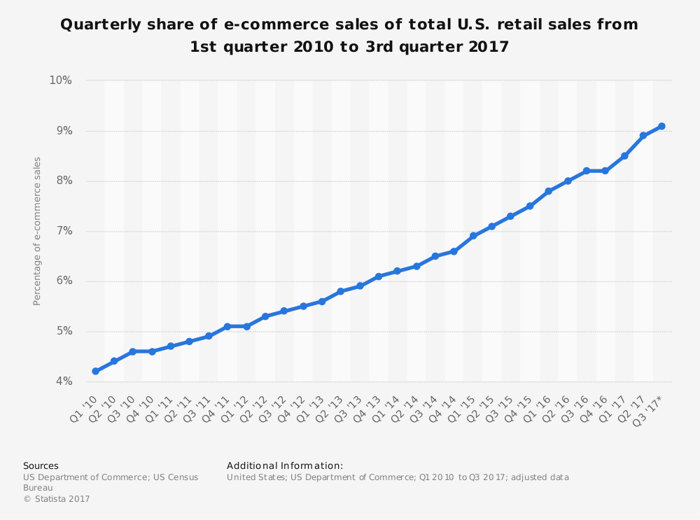 This figure is expected to jump to 12.4% in 2020 -- and, as the e-commerce titan in the U.S., Amazon is poised to profit the most from future growth. In 2016, for instance, Amazon alone reportedly accounted for 53% of online sales growth in the country. While the percentage of online-to-total retail sales will never come close to 100%, there's surely a lot of growth potential left.

8. It can benefit from international e-commerce growth opportunities

In the third quarter, 65% of Amazon's e-commerce sales came from North America, with the remaining 35% coming from international markets. Clearly, there are massive international e-commerce growth opportunities.

9. It continues to expand into new verticals and entirely new businesses

Amazon is continuously expanding into new verticals in its e-commerce business. For instance, it entered the grocery delivery business via its Amazon Fresh service, and more recently it's been rolling out its own clothing line. It's also entered entirely new businesses, which are complementary to its existing ones. Last August, for instance, it acquired Whole Foods, making it a major player in the brick-and-mortar organic grocery space -- and, perhaps more importantly, adding to its distribution network.

There are still plenty of retail verticals and other complementary businesses left to conquer. Current market chatter is that Amazon plans to enter the pharmaceutical services business.

10. It has a culture of innovation

The company isn't afraid to take risks, which means that it's going to sometimes strike out, but it's also much more likely to hit an occasional home run than companies that are less innovative and play it too safe.