Depending on whom you ask, WeWork is either a brilliant company that is re-imagining office space and the modern workplace, or a glorified, overvalued real estate play with no sustainable competitive advantage.

One thing is clear: The start-up is making waves in the business world and real estate market as it now commands a valuation of $21 billion, up from $18 billion earlier last year, just eight years after its founding in 2010. It's received investments from the likes of Softbank, Fidelity Investments, and JPMorgan Chase along the way.

Last year was a big one for the co-working specialist as the company made a number of acquisitions, taking over Meetup, The Flatiron School, and Spacemob, among others, and making a splashy real estate play with its $850 million purchase of the Lord & Taylor flagship building on Manhattan's Fifth Avenue, which will become the company's new headquarters.

With WeWork's valuation north of $20 billion, revenue on track for over $1 billion last year, and a pedigree as a disruptor, it's not a surprise that investors would be anticipating the company's IPO (initial product offering). Co-founder Adam Neumann reiterated last summer that the company plans to go public.

Before we explore whether WeWork will debut on the market this year, let's take a look at how far the company has come. 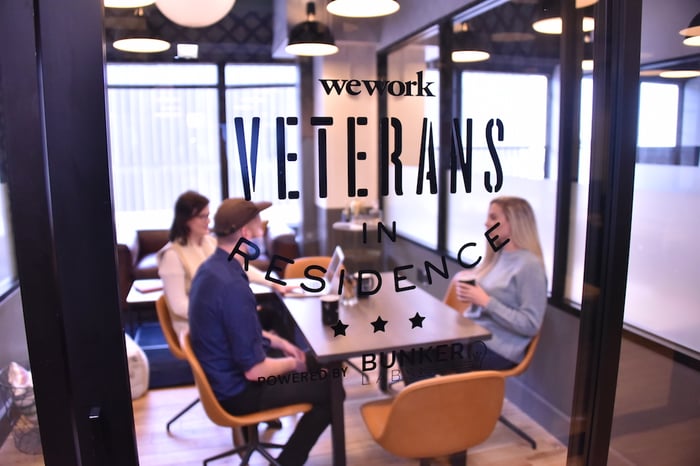 Like Airbnb or Uber, WeWork is a company distinctly of the mobile and digital era. The internet has rewritten the norms of white-collar work, allowing those in industries like media, design, and tech to work from anywhere with an internet connection.

WeWork capitalized on this shift by creating workspaces that cater to freelancers, entrepreneurs, and small businesses looking for customizable office space and the community that a WeWork hub fosters. The company leases office space and redesigns it to attract millennials in the knowledge economy as well as others looking for office space.

Founders Neumann and Miguel McKelvey started a similar business in 2008 in Brooklyn called Green Desk, as an eco-friendly co-working space, which paved the way for WeWork after they sold Green Desk to their landlord in 2010. Making community the central focus, the pair opened the first WeWork in New York in April 2011. Today, WeWork is growing quickly, with its locations nearly tripling over the last year, and the company now has 275 locations across 59 cities around the world. WeWork is even experimenting with living spaces with WeLive, which has two locations, one in New York and one in Washington, D.C., and offers short- or long-term housing in community-focused microapartments based on the WeWork model.

While the company has given no indication of when it would issue an IPO, there's good reason to think that WeWork could go public this year. The company said last year it would reach the key milestone of $1 billion in annual revenue, nearly doubling sales from a year ago. The stock market -- especially tech stocks -- is strong, as the Nasdaq jumped 28% last year and the valuation of the S&P 500 is as high as it's been since the tech bubble. Not all IPOs have been winners lately, as Snap Inc and Blue Apron were duds, but WeWork looks like the type of company -- the clear leader in a new industry and demonstrably profitable on a unit business -- that would generate excitement among investors. When it opens a new location, WeWork says it takes a loss for the first few months, but locations are generally profitable nine months after opening.

Having just scored a $4.4 billion investment from Softbank in August, WeWork may not necessarily need the cash that would come with an IPO, but the company has been expanding fast and spending money to boot with its $850 million purchase of the Lord & Taylor building and its $200 million acquisition of Meetup in November 2017. If the company seeks more such acquisitions, tapping the public markets may be its best option for a cash influx.

WeWork may also want to be mindful of the lesson in Uber's travails as a private company; the ride-hailing specialist may have waited too long to go public as it's now saddled with a slew of image problems after a number of scandals, not to mention regulatory challenges. WeWork's reputation in that area remains spotless for now, but it needs to avoid mistakes that would potentially damage that reputation.

With the market roaring, investors hungry for new tech IPOs, and a strong economy pushing WeWork's growth, 2018 could be a great year for WeWork stock to go public.