Virtual reality (VR) has been talked about for decades, with most public uses of it being gimmicky or wholly underwhelming. The technology has promise in a variety of areas, but consumer uses of it have yet to make a major splash.

That may well have changed as Walt Disney (NYSE:DIS) has welcomed an immersive new VR experience to its Disney Springs shopping complex based on its Star Wars franchise. Called "Star Wars: Secrets of the Empire," the new offering makes full use of VR to deliver an experience that could ultimately change how theme parks operate.

It offers visitors something much more than any previous Disney simulator or ride. Secrets of the Empire inserts people into a Star Wars experience that's so lifelike, it's at times terrifying because the game takes over reality. 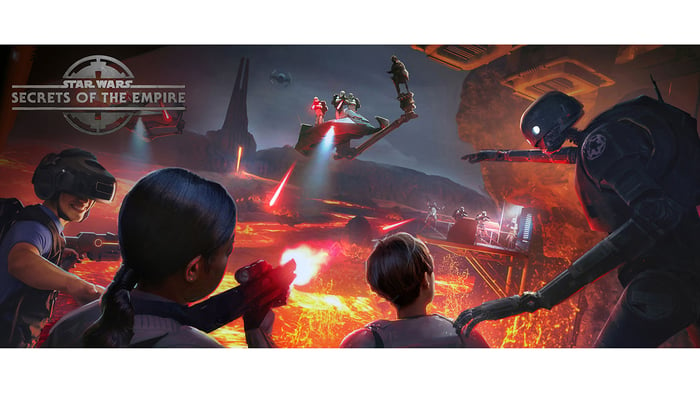 Disney's new attraction could be a sign of things to come. Image source: Getty Images.

VR has been used at theme parks before. Both SeaWorld and Six Flags have VR roller coasters where the content seen through a headset enhances the ride.

What Disney has done with Secrets of the Empire is simply more immersive. Visitors don a vest and headset that blocks out the outside world. At first, the gear is heavy and a bit awkward to wear, but that sensation goes away as soon as the show begins.

Without offering any real spoilers, people who go through Secrets of the Empire find themselves as Rebels dressed as Stormtroopers who must infiltrate an Imperial base to find out what's in a secret container. As you might imagine, things go wrong, and weapons are fired.

As you experience the "ride," what you see on your headset feels entirely real. For example, as you ride on a flying platform over lava, it seems like you could fall off. In addition, you feel the warmth of the lava, smell its smoke, and experience a breeze as your platform advances.

Once you find yourself shooting it out with the Empire, you can see which blaster bolts fly from your gun. Getting hit produces feedback in your vest that, while it doesn't hurt, makes it clear you have been shot.

While it's easy to see how this type of experience could become a major part of theme parks, it's obvious why Disney chose to debut the technology outside of its main parks. First, the ride is labor intensive. Each visitor needs help getting in and out of the gear. In addition, since only four people can go at a time (though there are multiple tracks going at the same time) the experience is relatively low-capacity.

It's also a bit glitchy. On my first trip through there were only three blasters for our group of four leaving one member of our party unable to participate in the most satisfying part of the experience.

A second trip through found no blasters waiting, and technicians had to cut short our trip by flipping up our headsets. Our third attempt resulted in my son disappearing about halfway through as the battery in his vest died. Each glitch forces you to start again, and it took four tries for my group to complete the experience fully successfully.

If Disney and its partners on this VR experience can perfect the technology, it allows for theme park attractions that go well beyond current rides. A physical attraction has limits, no matter how impressive or immersive a world you create. Putting people in VR suits opens up essentially limitless worlds and storytelling potential.

It's easy to see how VR could play a role in the planned Star Wars lands being built in Florida and California, as well as in the announced hotel themed to the movie universe. This type of technology allows for real movement, but in relatively combined spaces that transform into endless worlds.

There are still some kinks to be worked out, of course, and it's easy to see why Disney chose a relatively low-key launch for its first major VR experience. Going forward, though, it's likely that this will serve as the blueprint for a new generation of rides and experiences as VR delivers on its promise, at least in the theme park space.