If you thought your Roomba's only job was to clean your floors, iRobot (NASDAQ:IRBT) wants you to think again. On Wednesday, the company announced it will soon add indoor Wi-Fi mapping to the repertoire of its popular robot vacuum line. More specifically, later this month, the home-robotics specialist will begin rolling out the feature on its HOME app, allowing Wi-Fi-enabled Roombas to build maps displaying the strength of the wireless signal throughout your home. 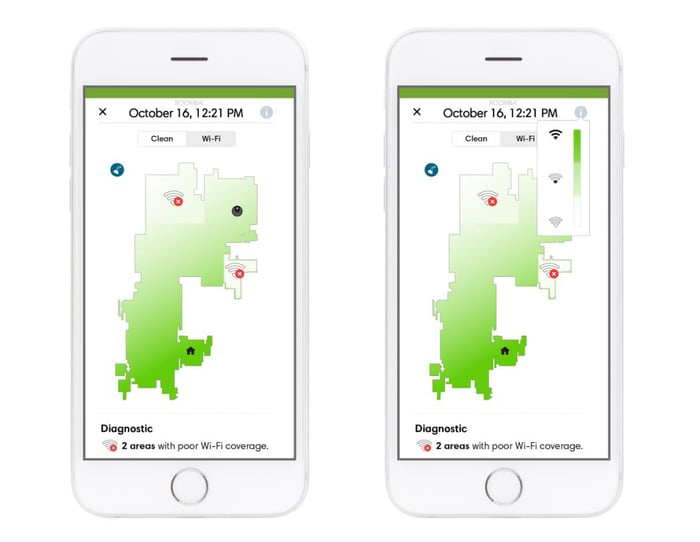 To be clear, this isn't a massive leap from the cleaning maps already being created by millions of Roombas using iRobot's patented V-SLAM (visual simultaneous localization and mapping) technology. iRobot first introduced V-SLAM, which is enabled by a combination of low-cost cameras and high-tech mapping and navigation algorithms, in its vacuums with the high-end Roomba 980 in late 2015.

But extending the functionality to include Wi-Fi signal-strength maps will help users identify the more pesky low-signal areas in their homes where they might need to place a range extender -- and not just to improve the utility of their Roombas. iRobot's ambitions are much, much broader than that. In an interview last month with MIT Technology Review, iRobot co-founder and CEO Colin Angle argued that, while the spatial understanding that Roomba has is central to its ability to clean floors, it can also provide a "unifying intelligence [that ties everything together]" and serve as the "building blocks of the smart home."

"So if you bought a Roomba, own a smartphone, and have some number of connected devices, the Roomba could build a map of your home, place your devices within the map, and share that information with other devices," Angle explained. "Then the ecosystem could give you a choice of preferences based on [the included devices], and have the room start behaving [intelligently]."

In the same interview, Angle offered a reminder that iRobot's other areas of interest include lawn mowing, laundry folding, loading and emptying dishwashers, and bathroom cleaning. "Robots will eventually handle all of this routine home maintenance; it's just a question of when," he added.

However, in order to function as pieces of a cohesive smart home, these robots need to be able to communicate with both one another and smart devices from different manufacturers. And that starts with Roomba -- a robot that travels throughout your home -- as the unifying piece.

It won't happen immediately, of course. Though iRobot has already made Wi-Fi mapping available to a limited number of users, it won't be automatically available for every Roomba owner right away. Instead, iRobot will give users the option of signing up for a beta program within its app. Through that program, iRobot will initially launch Wi-Fi mapping, then follow with additional beta features down the road.

But if one thing is clear, it's that this is only the first of many intriguing new features that iRobot plans to introduce to ensure it plays a central role in the burgeoning smart-home industry.