More than a few commentators and casual fans consider it one of the worst pro sports ventures in history: World Wrestling Entertainment's (NYSE:WWE) XFL football league played for but a single disastrous season in 2001. The league represented a major misstep for the company; not only was it a financial failure, it was also criticized for a generally low quality of play.

WWE dropped XFL like a hot potato, and investors and other observers assumed that's the last they'd seen of WWE and its officials' involvement in legitimate pro sports. Apparently, however, they're wrong. 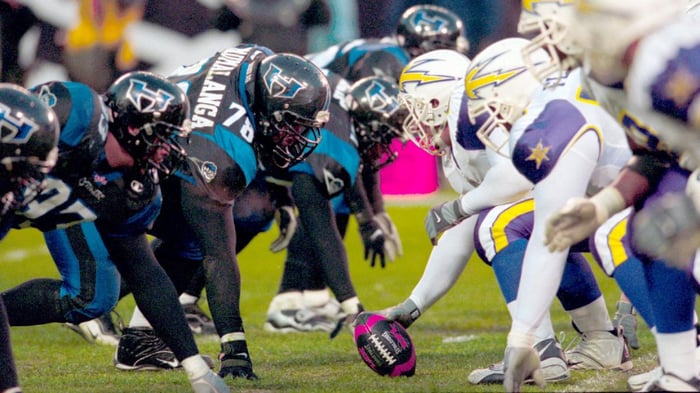 A 2001 XFL game between the New York/New Jersey Hitmen and the Birmingham Thunderbolts. Image source: WWE

You can't keep a good mogul down

Following a few weeks of rumors from various sources around the internet, WWE implied in a regulatory filing that its chairman and CEO Vince McMahon is getting back into the football business.

The company announced in mid-December that he had sold 3.34 million of the company's shares. He'll use the proceeds "primarily to fund a separate entity from the Company, Alpha Entertainment LLC."

WWE added that McMahon's new entity was "established to explore investment opportunities across the sports and entertainment landscapes, including professional football."

Alpha Entertainment, it turns out, also filed for a set of trademarks. These comprise XFL, UFL, URFL, United Football League, and the phrase "For the love of football."

So, one plus one appears to equal two here. McMahon formed a new company through which he's attempting to trademark a set of apparent football league names and a catchphrase. Plus that new company now has a war chest in the neighborhood of $100 million.

That's probably enough capital to at least launch a new league, and perhaps take it through its initial paces. In its day, XFL reportedly lost around $70 million. That was a crunching blow for WWE and its 50% partner in the venture, broadcaster NBC, now owned by Comcast (NASDAQ:CMCSA).

By the way, the XFL's demise didn't sour the relationship between WWE and the media conglomerate; Comcast-controlled NBCUniversal still airs the company's flagship Raw and SmackDown weekly TV shows on its USA Network.

I should stress that WWE has not outlined any plans beyond what it revealed in the filing, so at this point the potential existence of this new football league -- whether it will be known as XFL or have a new name -- still has to be considered speculation.

One sport at a time

So should WWE shareholders be concerned about this development? The original XFL drained resources to deliver a sub-standard product that lost money. I doubt shareholders really want to see a repeat.

Perhaps to McMahon, the NFL's recent dive in popularity means opportunity for an alternative product. I believe, however, that the proliferation of alternative entertainment sources is a key reason for this, not a sharp downturn in the quality of play (which is still quite good). I don't buy the reasoning by some commentators that the national anthem protests are driving away viewers either.

One big challenge is that good teams and competitive league play take quite some time to develop. The XFL's teams weren't given such an opportunity, one primary cause for the low-quality games. The same thing would probably occur this time around. So the XFL wasn't a good idea then, and I don't think it's a good idea now.

I also doubt a company like Comcast, or any other major broadcaster, would take a shot with an alt-NFL considering how badly the only XFL season went (apparently it was difficult to sell air time for games, so some was given away to advertisers).

Yet at this early stage, it appears the new venture won't touch WWE. The company took pains to point out that McMahon has formed his own corporate vehicle for the football league (again, probably the plain English translation of "investment opportunities across the sports and entertainment landscapes"). Going by the little we know right now, WWE won't be involved in it.

It just so happens that the company's shares are near their all-time high. While Vince is a gambler and hail-mary pass thrower by nature, I don't think he'd put the stock of his baby in undue jeopardy, particularly when it's doing so well. Still, we WWE shareholders should keep an eye on this story as (and if) it develops.

Perhaps we'll find out more about McMahon's plans later this month. Freelance reporter and occasional wrestling writer Brad Shepard tweeted in mid-December that the wrestling kingpin was bringing back football "and may announce it on January 25th, 2018." Let's see if we get an official update then.