Bed Bath & Beyond (NASDAQ:BBBY) has spent the past few years acquiring an eclectic assortment of online home goods retailers in an effort to make up for all the time it neglected the e-commerce arena. It's been on something of a multiyear spending spree to bring the retailer up to speed with the competition.

Bed Bath & Beyond has bought up four different business in the past five years, and though they didn't cost much, neither did the purchases move the needle on sales or profits. Instead of squandering its time and resources on purchasing sites like failed flash sale site One Kings Lane, which it purchased for less than $12 million, it might have been better served doing what Home Depot (NYSE:HD) just did, and bought The Company Store. 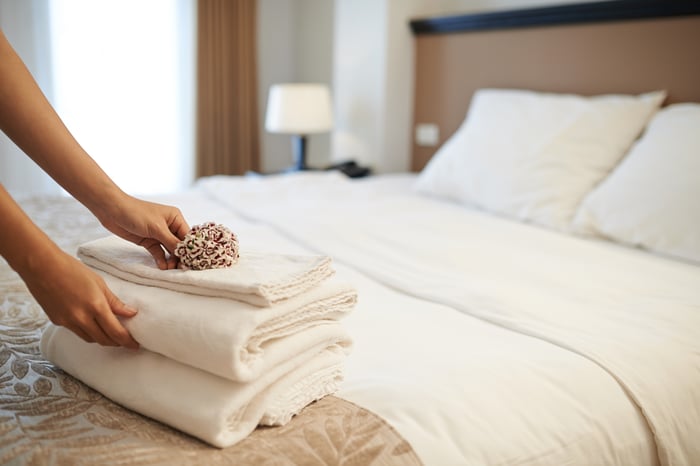 The home improvement superstore said it was buying from Hanover Direct the online business of direct-to-consumer home goods site The Company Store. While terms of the deal were not released in the announcement, industry site Internet Retailer estimates The Company Store generated approximately $23 million in sales in 2016, though presumably some sales were from the handful of brick-and-mortar stores the company operated, which are not included in the purchase.

Although that amounts to about 1% of Bed Bath & Beyond's quarterly revenue, it's more than the retailer has realized from its purchase of sites like Of a Kind, which features specially commissioned, limited-edition items from emerging fashion and home designers, or PersonalizationMall.com, a site for personalized tchotchkes.

Moreover, now that Home Depot has acquired The Company Store, Bed Bath & Beyond needs to really worry about how the DIY warehouse is going to impact its business.

A hard-line attack on soft goods

Earlier this month, Home Depot said it was looking to more closely link its physical stores with online services and home delivery, and in a statement announcing The Company Store purchase, CEO Craig Menear said it will "help us expand our online decor business into broader categories across the entire home."

Flooring and lighting account for about 10% of Home Depot's annual sales, or almost $9.4 billion, but home decor amounts to only $2.9 billion, or 3% of the total. The Company Store will allow Home Depot to now expand that percentage because of its ability to deliver products across bedding, bath, and related categories.

It's not a sure thing for Home Depot. Customers likely aren't going to associate the DIY warehouse where they're buying lumber, cement, and hammers as the place to also go for pillowcases and towels. It's not as seamless as it appears.

Still, it gives the home improvement leader the opportunity to sell them a complete a project from start to finish in one place, while also giving it a chance to steal away customers not only from Bed Bath & Beyond, but also from other home goods retailers like Wayfair, At Home, and TJX Companies.

As the leading chain in the space, however, Bed Bath & Beyond seems to have the most to lose in this fight as it transforms its stores into a place where customers can buy more merchandise online.  Its rivals are still reporting rising sales while it is scrambling to halt a decline. A new competitor that can challenge its digital efforts as well as its physical store presence is a grave threat to its recovery.