What was the best-performing stock in the S&P 500 index in 2017? It wasn't a company specializing in artificial intelligence. Neither was it a booming biotech. Instead, taking the prize as the top large-cap stock of all was one that many investors haven't even heard of: Align Technology (NASDAQ:ALGN).

Align Technology is best known for its Invisalign clear dental aligners. Those aligners made the company's shareholders very happy last year, with Align stock soaring more than 130%. Unfortunately, I wasn't one of those shareholders. Although I have been a fan of Align for several years, I didn't buy the stock.

A few days ago, however, I finally bought shares of the red-hot healthcare company. Was I too late to the party? I don't think so. 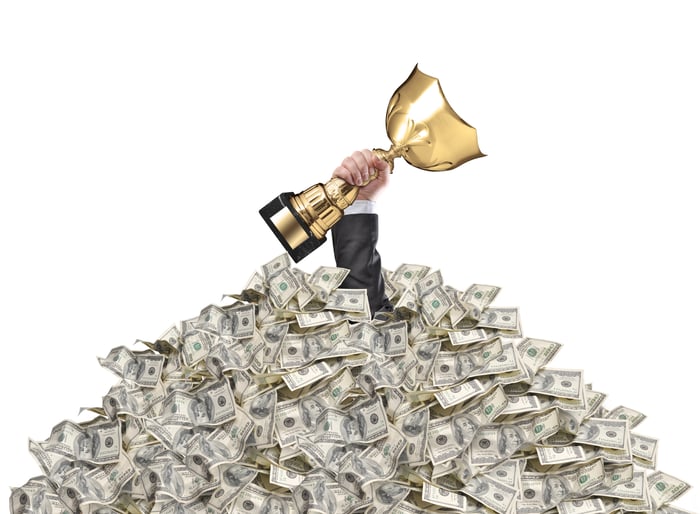 I covered the company's quarterly updates throughout the year. Below are the headlines from the articles for each of Align's earnings announcements last year:

Did you notice the recurrence of one word (other than the company name) in every one of the headlines? In each and every quarter, Align hit a new record high in revenue. Most of that revenue -- nearly 90% of it -- came from Invisalign. It's pretty clear (no pun intended) that the aligners are becoming increasingly popular.

Align Technology also saw success from another distribution channel for clear aligners. In 2016, the company formed a partnership with SmileDirectClub (SDC), an at-home program for affordable, cosmetic teeth straightening. Under the deal, Align became the exclusive third-party supplier of clear aligners to SDC. These aligners aren't marketed under the Invisalign brand name and are only applicable for minor tooth movement. Align also bought a 17% stake in SDC as part of the agreement.

While clear aligners made the most money for Align, the company's intra-oral scanner and service business performed really well in 2017 also. In the third quarter, for example, revenue from Align's scanner and service segment jumped 25% over the prior-year period.

But I didn't buy Align stock because of the fantastic year it had in 2017. I bought the stock because I think there are even greater opportunities ahead. Take a look at the company's current market share as a percentage of the available market. 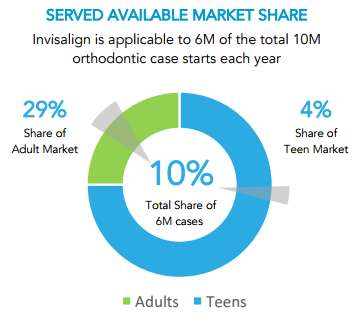 There are many more adults and teens still using wire-and-metal braces to straighten their teeth than there are using Align's clear aligners. As Align aggressively markets to dental providers and directly to patients, I fully expect the company's market share to grow.

One thing this chart doesn't show is where Align's sales are coming from geographically. Currently, only one-third of clear aligner sales stem from international markets. As the middle classes in developing nations like China and India expand, I predict that Align's slice of the pie will get bigger -- but more importantly, the pie itself will get bigger.

Note also that Align currently has around 10% of 6 million cases shipped each year. However, there are actually 10 million orthodontic cases shipped annually. As of now, Invisalign can't be used in more severe types of malocclusion (misalignment of teeth). That should change in the not-too-distant future, though. Align is developing new technology that the company thinks will open up in the ballpark of 2.5 million additional annual cases available for treatment with Invisalign. As a result, the size of the pie should grow even more.

Like most investors, I like the idea of buying low and selling high. It makes sense. With Align stock trading at close to 53 times expected earnings, however, buying low isn't an option. Am I kicking myself for not buying Align sooner? Yep. Although I recognized relatively early on that the business had a lot of potential, I didn't buy the stock -- primarily because my portfolio already had plenty of healthcare stocks.

But there is another approach that's the next best thing to buying low and selling high: Buy high and sell higher. That's my plan now with Align Technology. Yes, the stock is expensive based on conventional valuation metrics. However, I think that Align should be able to significantly increase its sales and earnings over the next several years through marketing, international expansion, and innovation. My prediction is that the company's value will grow a lot more as Align succeeds with this strategy.

By the way, while my approach is to buy high and sell higher, I don't expect I'll sell my shares for a long time to come. I might be late to the party with Align, but my hunch is this party won't end anytime soon.