This marijuana ETF has a few flaws you should know about.

The Horizons Marijuana Life Sciences Index ETF (HMMJ 3.62%)(HMLSF 4.67%) is often said to be the "better" marijuana ETF, since it focuses on companies that make their money largely from medicinal uses of marijuana.

At first glance, it's a big improvement over the ETFMG Alternative Harvest ETF (MJ 2.71%), which inexplicably includes large tobacco companies in its portfolio. But a deeper dive reveals that while Horizons Marijuana Life Sciences Index ETF may be more focused, it isn't necessarily a clear-cut "set and forget" weed ETF.

1. How it picks marijuana stocks

The single most important thing to know about any index ETF is which index it is designed to track, and how that index decides which stocks are allowed in. The Horizons Marijuana Life Sciences Index ETF seeks to replicate the returns of the North American Medical Marijuana Index, an index that generally includes companies located in Canada (74% of the fund), the United States (16%), and Great Britain (10%).

To be eligible for the index, companies must generally have a market cap in excess of $75 million Canadian (CAD) and meet some practical liquidity requirements. To make the cut, stocks need to have monthly daily trading volume in excess of 75,000 shares daily and top CA$250,000 in average daily trading value.

This may seem like a low bar (and it is!) but with so few stocks to choose from, marijuana ETFs can't afford to be too picky, lest they limit themselves to only a handful of stocks to put in their portfolios. To be fair, this is a problem that plagues most sector ETFs. 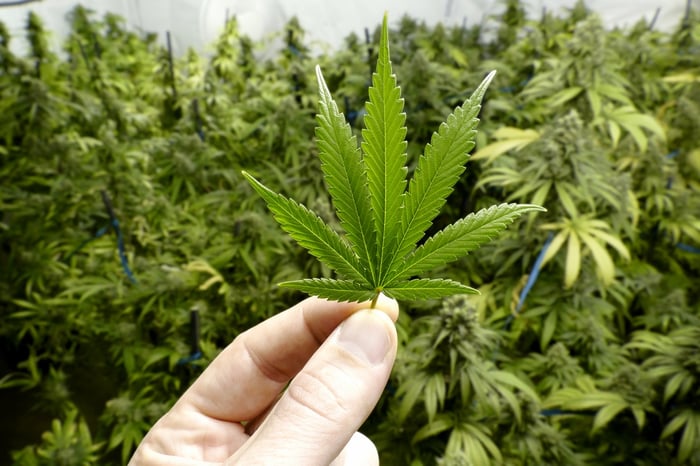 The ETF currently owns 28 different stocks, but the majority of the ETF's value comes from just the top five largest holdings. Here's a look at the largest companies in the fund as of Jan. 4, 2018.

Frankly, there's a case to be made that you really don't need this fund to invest in marijuana stocks. Realistically, a portfolio of its five or 10 largest stocks will probably approximate the returns of the ETF, given how concentrated the fund is.

The Horizons Marijuana Life Sciences Index ETF isn't necessarily cheap, as it carries an annual management fee of 0.75% on assets. That's nearly three times as much as investors pay to invest in sector ETFs on average, though it's comparable to the annual expense ratio on ETFMG Alternative Harvest, an ETF listed in the United States.

That said, fund fees aren't the only cost of holding a fund. People who live in the U.S. may find that commissions, not fund fees, make this ETF cost prohibitive. Horizons Marijuana Life Sciences Index ETF is only available over the counter (OTC) in the United States or on Canadian stock exchanges. OTC and international stock trades may be subject to higher commissions at some online discount brokers.

4. Some weaknesses in the portfolio

As a whole, today's pure-play marijuana stocks are, at best, start-ups, and at worst, companies that spend more time promoting their stock than their products.

There are some glaring weak spots in this ETF. For example, it has roughly 7.5% of its portfolio invested in Scotts Miracle-Gro, a company that generated only about 11% of revenue and pre-tax segment profits from its hydroponic business unit, Hawthorne, in 2017. It's fair to say that Scotts Miracle-Gro makes far more money selling products to kill and prevent weeds than products designed for growing the other kind of weed.

On the opposite side of the spectrum, this ETF also has about 3.1% of its assets tied up in Supreme Cannabis, a company that until mid-December went by the name Supreme Pharmaceuticals before capitalizing in the boom in pot stocks with a name change. Supreme has a rather complex capital structure with warrants, options, and other convertible securities in place that could dilute shareholders of any gains, making it something of a "heads you lose, tails you lose" marijuana stock.

To be sure, this isn't a failure of the Horizons Marijuana Life Sciences Index ETF, per se; the ETF is doing what index funds are supposed to do, which is to invest in everything in a defined universe of stocks, the good and the bad. Sector ETFs give you exposure to a particular theme; they don't promise good returns. Keep that in mind.

5. You're probably too late to the party

Horizons Marijuana Life Sciences Index ETF now ranks in the top 10% of ETFs by size in Canada, with $528 million in assets, according to ETF analyst Eric Balchunas. Together with the ETFMG Alternative Harvest ETF, these two ETFs could soon have more than $1 billion of assets invested in a small industry largely made up of companies with microscopic valuations.

Already, it appears that marijuana ETFs are large enough to move the market in pot stocks. As ETFMG Alternative Harvest ETF ramped up over a seven-day trading period, I calculate that approximately 40% of the trading volume in one of its holdings could be attributed to the fund's asset growth.