Winter storm Grayson is currently pummeling the East Coast as it undergoes what meteorologists call "bombogenesis," the process of a cyclonic winter storm rapidly intensifying to create near-hurricane-level forces. In effect, it's a storm turning into a weather bomb.

This blast of snow, cold, and wind isn't much fun for individuals, and the extended deep freeze and dangerous weather are also a worrisome development for retailers that are clinging to survival. 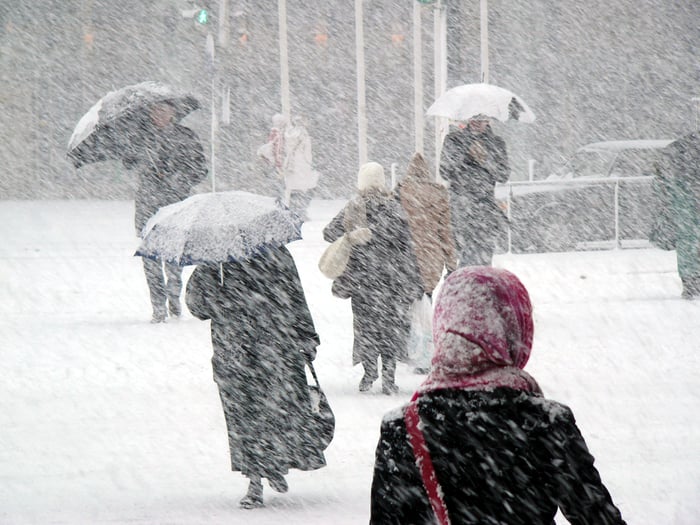 Not singing in the rain

You might think that retailers that were complaining about the unseasonably warm fall that we just experienced, such as Macy's (NYSE:M), which blamed the higher temps for causing a sales shortfall in coats, boots, and other winter accessories, would welcome a chilly blast. Unfortunately, it doesn't quite work that way, which is why we've seen so many retailers over the years complain about the "snow in winter" effect, where the seemingly surprise occurrence of snowy weather sabotages sales.

And when temperatures are this bone-chilling -- the average temp across the entire continental U.S. was recently 11 degrees -- consumers are loathe to venture out in the storm. In this retail environment, where post-Christmas sales can be crucial to a retailer's profitability, that's not a good development.

According to Mastercard's SpendingPulse report, which tracked consumer spending from Nov. 1 through Dec. 24, Christmas sales jumped 4.9% this year, the largest year-over-year increase since 2011. Retailers were hoping to keep the party going after the holidays by offering steep discounts on merchandise. In fact, ShopperTrak was expecting the day after Christmas to be the fourth-busiest shopping day of the year, while analysts at Deloitte found 38% of consumers were planning to take advantage of after-Christmas sales, up from just 5% five years ago.

The polar vortex that's now sweeping down across much of the country, bringing what one meteorologist described as the "mother lode of numbing cold," could put a decided chill in those plans.

Ill wind that blows no good

J.C. Penney needs consumers to keep coming to its stores if it hopes to survive. After a horrible year that saw its stock lose 60% of its value and net losses nearly double to $370 million, the retailer just reported that Christmas sales at stores open for at least a year jumped 3.4% from last year. That was a necessary respite from the gloom, but one that could see those gains shaved next quarter by the arctic temps.

Similarly, Macy's saw November-December sales rise 1%, though that still means its full-year comps will be down as much as 2.7%, with total revenues coming in almost 4% lower. If consumers aren't willing to keep shopping after the holidays, however, that could get 2018 off to a poor start, something it really can't afford.

And, as the National Retail Federation notes, "When a winter storm keeps people at home, some sales are never made up."

It looks like retailers may have made it through Christmas with enough good weather to salvage what could have been a completely disastrous year for many. With Mother Nature throwing weather bombs at us now, however, first-quarter earnings results may not be so hot.