In 2016, auto sales growth in China rebounded from a brief slowdown, after the government slashed the sales tax levied on small-engine cars from 10% to 5%. For the full year, this stimulus drove a 15.9% increase in deliveries across China's auto industry. General Motors (NYSE:GM) was a big beneficiary, recording a 7.1% sales increase despite a downturn in the mini commercial vehicle market, which its Wuling brand dominates.

However, many pundits worried that this momentum wouldn't last. After all, the tax on small-engine cars increased to 7.5% in 2017 and returned to its original 10% level this month. Despite this tax headwind, the General delivered another year of solid sales growth in China during 2017.

Sales did slow to begin the year

In the first few months of 2017, General Motors did face a sales downturn in China. Through May, GM sold 1.48 million vehicles in China, down from 1.54 million a year earlier: a decline of nearly 4%. 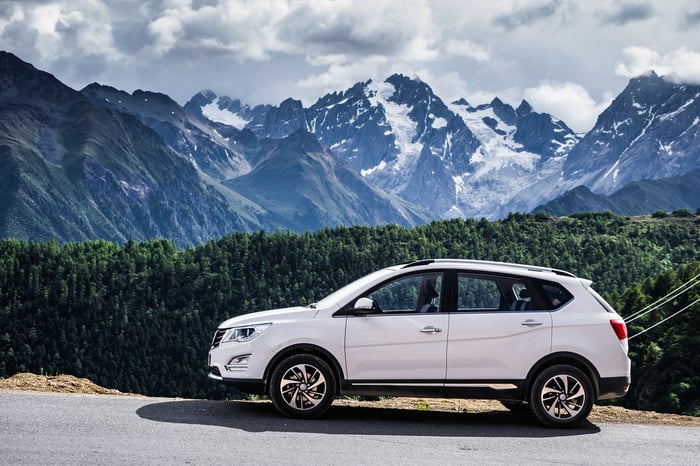 This hiccup was to be expected. It was common knowledge that the purchase tax for small-engine vehicles would rise in 2017, so it made sense for consumers who were thinking about buying a small car to make sure they did so by the end of 2016. Thus, there was an exaggerated impact on Chinese auto sales in early 2017 from demand that was pulled forward to late 2016.

General Motors broke out of its sales slump in China last summer. In fact, it has posted record deliveries in China for every month starting with June, including double-digit gains in several of those months.

On Thursday, GM reported that it ended 2017 on a high note in China, with deliveries up 13.1% year over year to 491,702 in the month of December. This performance pushed GM China's annual sales past the 4 million mark for the first time ever, to a new record high of 4.04 million.

For the full year, General Motors' deliveries in China increased 4.4%. However, looking just at the period since June -- when GM returned to consistent growth there -- deliveries increased 9.7% year over year: a remarkably strong result.

General Motors' growth in China over the past year was driven entirely by the relatively young Baojun brand, which hit the market just seven years ago. In that short period of time, Baojun has become one of the hottest auto brands in China, with nearly 1 million deliveries in 2017, up from fewer than 500,000 two years earlier. Based on its recent growth trajectory, Baojun could overtake Buick and Wuling to become GM's best-selling nameplate in China this year.

GM can handle another tax increase

As was the case a year ago, General Motors and its rivals are facing an uptick in the purchase tax for small-engine cars beginning this month. Once again, the looming tax change probably encouraged some buyers to accelerate their purchases into December.

Nevertheless, GM's strong performance during 2017 indicates that a modest increase in Chinese purchase taxes shouldn't hold back sales for long. (Furthermore, the company will face relatively easy comparisons for the first few months of the year.)

Continued sales growth in China -- as well as growing demand for higher-margin SUVs and luxury vehicles -- should allow General Motors to fully offset pricing pressure at the low end of the market. This situation points to a continuation of GM's string of strong profits in its second most important market during 2018.