Retail stocks have been booming of late. Bullish reports on the holiday shopping season pushed up brick-and-mortar chains across the board as ailing sectors like department store chains got a reprieve from what had been an otherwise awful year. Macy's (NYSE:M) has jumped 14.7% since November 28, when strong Black Friday numbers first began driving retail stocks higher, and the SPDR S&P Retail ETF (NYSEMKT:XRT) has gained 7.3% since then.

One retail giant, however, has largely missed out on the rally. Amazon (NASDAQ:AMZN) stock has gained just 0.8% since then, trailing not only the broader retail sector but also the S&P 500, which is up 3.2% during that time.

However, that discrepancy seems to underscore a fundamental misunderstanding of Amazon's relationship to the broader retail sector. For instance, on November 29, when retail stocks rallied with Macy's jumping 8.2% and the SPDR Retail ETF up, Amazon fell 2.7%. The implication seemed to be that the success of brick-and-mortar chains was coming at Amazon's expense. That logic is faulty, however. Here's why. 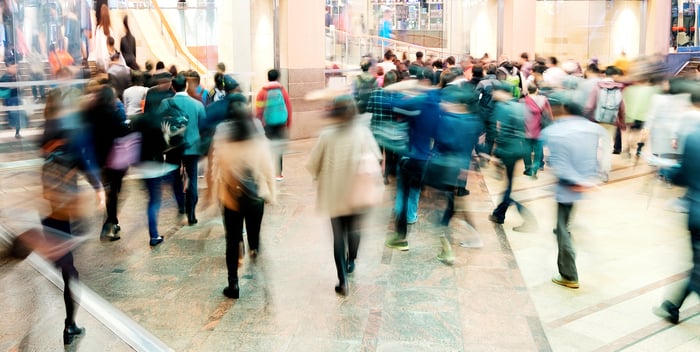 Retailers compete against each other, but sectors like department store stocks tend to rise and fall in tandem because the individual operators are more affected by macroeconomic conditions and other such factors than they are by competitive behavior. It's clear why this holiday season was such a success for retailers, with sales increasing 4.9% according to Mastercard's SpendingPulse, the biggest increase since 2011. The economy is as strong as it's been in a decade, with the stock market at a record high, low unemployment, low gas prices, and an extended shopping season with an extra weekend as Thanksgiving came early and Christmas fell on a Monday. The Commerce Department also reported that retail sales jumped 5.8% in November.

Given those parameters, there's no reason to think that Amazon wouldn't have benefited from the surge in holiday spending, especially as e-commerce spending as a percentage of retail sales peaks in the fourth quarter and as consumers trust Amazon with last-minute deliveries.

Led by Amazon, e-commerce continues to take market share from brick-and-mortar stores, and this holiday season was no different. Over the Black Friday weekend, store visits actually fell 1.6% on Thursday and Friday according to ShopperTrak, but online sales jumped 18%. Similarly, SpendingPulse found that e-commerce sales increased 18.1% in the period from November 1 to Christmas Eve, which outpaced overall e-commerce growth, which has hovered around 15% in recent quarters.  Amazon itself has also regularly topped that growth rate: its own North American sales have grown 22% or more in the last six quarters. In the most recent period, net sales spiked 35% in the region, though that was helped by the Whole Foods acquisition.

Amazon loves sharing inscrutable figures on its sales performance, touting growth off of a base it doesn't share. It's become a regular feature of the company's communications on big sales days like Prime Day and Black Friday and other corporate milestones. While Amazon never offers hard numbers in these releases, they are generally bullish signals for its results.

This time around, the company said more new paid Prime members joined last year than in any previous year, and that the company now offers free, two-day shipping on more than 100 million items. More than 5 billion items were shipped through Prime, and 4 million signed up for free trials of Prime in one week alone. The company said it was its biggest holiday season, "with customers all around the world" shopping at record levels.

It seems like Amazon is up to its usual tricks. If brick-and-mortar retail did well this holiday season, you can bet on another round of strong results from Amazon when it reports at the end of the month.