Please ensure Javascript is enabled for purposes of website accessibility
Log In Help Join The Motley Fool
Free Article Join Over 1 Million Premium Members And Get More In-Depth Stock Guidance and Research
By Rich Duprey - Jan 7, 2018 at 7:00AM

Its latest investment in the cigarette alternative sector suggests it might have bigger plans.

Want to know how you can tell tobacco giant Altria (MO -1.92%) is serious about electronic cigarettes? It's now investing in vape shops.

The leading U.S. cigarette manufacturer -- which is also hoping to reap a windfall if Philip Morris International (PM -0.11%) is successful in winning FDA marketing approval for its heat-not-burn Marlboro Heatsticks e-cig -- said it took a minority position in one of the country's largest e-cig retailers because doing so will give it greater insight into customers' purchasing habits. 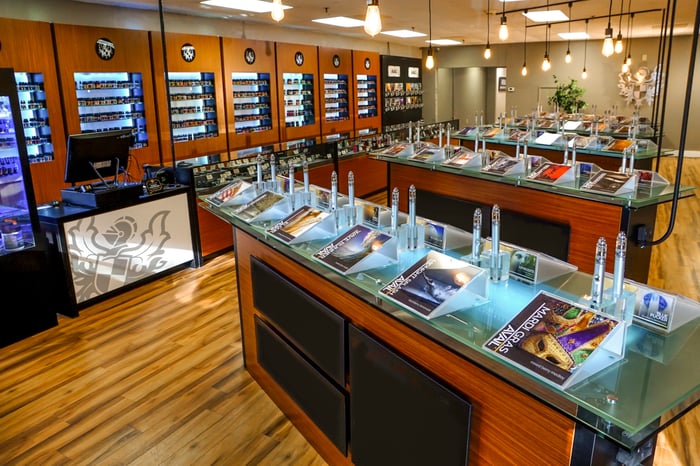 The electronic cigarette market has the potential to change dramatically in size and scope this year. If Philip Morris can earn a reduced-risk classification for iQOS, it may gain a competitive edge over other e-cig manufacturers that aren't legally able to advertise their products as a safer alternative to traditional cigarettes.

If it fails on that score, but still wins approval to sell the device in the U.S., it will introduce a new technology into the market that will eventually be followed by similar products, such as British American Tobacco's (BTI -2.20%) iFuse glo, which the U.K.-based tobacco company has said it will seek approval for later this year.

Heat-not-burn technology elies wholly on real tobacco to create a vapor that delivers both the nicotine hit and the tobacco flavor smokers crave. The devices now available in the U.S. market rely upon nicotine-infused e-liquids to provide the same effect, and many users feel the result comes up short of the real thing.

But the element common to all the devices is that they're sold in drug stores, convenience stores, and vape shops, stores dedicated to the  promotion of such products.

Avail Vapor is one of the biggest chains of vape shops, and also manufactures its own e-liquids, which Altria says are produced in state-of-the-art, ISO-certified clean rooms. The company also has a full-service analytical laboratory where it conducts tests to ensure it's in compliance with federal regulations.

Altria already has its own electronic cigarettes on the market: the MarkTen XL from its Nu Mark subsidiary, as well as Green Smoke, one of the early players in the space that Altria acquired several years ago. These devices are often referred to as cig-a-likes because they're shaped like combustible cigarettes, and often come with rechargeable batteries and replaceable cartridges containing the e-liquids that are heated to create a vapor.

Larger vaping systems are referred to as tanks or mods, and users can customize them to to their own personal designs.

With traditional cigarette smoking on the decline, and the FDA preparing potentially devastating new rules limiting their nicotine levels, the tobacco industry is gearing up with devices to transition to when the inevitable shift happens. Philip Morris had said it expected to have installed capacity to produce as many as 60 billion HEETS units annually for its iQOS devices by the end of 2017, up from 15 billion the year before, and it expects to increase capacity further in 2018.

Altria entered into exclusive marketing agreements with Philip Morris several years ago to develop reduced-risk products like the iQOS, and its investment in Avail looks like a move to ensure its place in the market.

It's also may resemble what Anheuser-Busch InBev (BUD -4.18%) did in its own acquisition spree a few years ago. The  brewer picked up a string of beer distributors so that it could have them stock mostly its own brands,  squeezing out competing craft beers. Altria could use its stake in Avail to similar way.

Even with a reduced-risk label, the iQOS could face tough competition from rival Juul Labs, which has come seemingly from nowhere to capture 40% of the e-cig market. Its devices differ from both standard e-cigs and heat-not-burn devices. Though they do use a liquid to produce their vapor, it contains naturally occurring tobacco salts rather than so-called "freebase" nicotine. And as the established leader, it is unlikely to give up its preeminent position easily.

And of course, there are tens of thousands of retail outlets where e-cigs can be purchased. Avail has only 102 stores in 42 states, but if its gives preference to Altria brands, that could subtly change the dynamic.

Right now Altria hasn't indicated it intends to invest in other vape shop chains, but should it do so -- or help Avail significantly expand its footprint -- that may be an indication the tobacco giant is going to make an effort to corner the electronic cigarette market.